The National Guard, falling short of its recruitment goals for the first time in years, is looking to provide its personnel with health care benefits on par with what active-duty service members receive.

Gen. Daniel Hokanson, chief of the National Guard Bureau, told reporters Tuesday that the Army National Guard is 6,000 personnel short of its authorized end strength of 336,000 guard members, a departure from recent trends.

“The reason why this is a concern...

The National Guard, falling short of its recruitment goals for the first time in years, is looking to provide its personnel with health care benefits on par with what active-duty service members receive.

Gen. Daniel Hokanson, chief of the National Guard Bureau, told reporters Tuesday that the Army National Guard is 6,000 personnel short of its authorized end strength of 336,000 guard members, a departure from recent trends.

“The reason why this is a concern is obviously, if you look at last year and the years prior to that, we have always met our authorized end strength,” Hokanson said.

The National Guard is looking to boost incentives to join, but expects it may need to discharge up to 14,000 guard members over the next two years who have refused to get vaccinated against COVID-19.

Members of the National Guard had until the end of June to get vaccinated. The Associated Press reported in June that the Army Guard had the lowest vaccination rate across the U.S. military.

“The competition is a lot stiffer. So whereas in the past, maybe there were youth that were propensed, that would certainly join the military. Now, because of the labor shortage, private sector companies are becoming a lot more competitive, in terms of attracting that talent as well,” Salahuddin said.

Among the proposals on the table, the National Guard is pressing Congress to provide for cost-free TRICARE for all reserve and guard members. Currently, those members pay a premium and a co-pay for medical care, though they are significantly reduced compared to private insurance.

Hokanson said the National Guard estimates that providing free TRICARE benefits to all its personnel would cost about $719 million a year. This would also benefit the roughly 60,000 guard members who are currently uninsured.

“The benefits matter, and I think benefits parity matters as well. And really, that’s what we’re after, in order to ensure medical readiness across the formation, and so that people are prepared when they’re asked to deploy,” Maj. Gen. Daryl Bohac, Adjutant General for the Nebraska National Guard, told reporters.

“When we look at potential folks that will come into the National Guard, sometimes that’s less appealing if health care is not part of their decision process to serve. And if it is really important, and sometimes that would be a distractor, or something that would cause them to go somewhere else,” Hokanson said.

The National Guard is also looking at ways to expand education benefits. Guardsmen are eligible for federal tuition and GI Bill benefits, but cannot claim independent student status like their active-duty counterparts. Hokanson said this limits the financial aid that guardsmen qualify for under the Free Application for Federal Student Aid (FAFSA).

“That makes National Guardsmen less competitive for that. And for us, we just want to make sure that there’s a level playing field for them. And they can utilize all the benefits that they’re entitled to,” he said.

The National Guard is also looking to provide bonuses to guard members who successfully recruit someone to join, as long as that recruit meets the minimum qualifications. The National Guard deployed this strategy at the height of the wars in Iraq and Afghanistan, although the program encountered problems with improper payments.

“If we look at some of the previous programs that were put out there, and by putting in the right checks and balances in place, we could really help make every single guardsman a recruiter, by paying them a bonus for anybody that they bring into the organization that’s able to complete their military training,” Hokanson said.

“I have not seen a lack of volunteerism when asked for people to come on state active duty and respond to disasters or other events in the states. In fact, I would say typically, we have more volunteers than requirements. I think that’s actually one of the reasons young people do want to join the National Guard, in particular, because they get to serve locally and they get to help their communities,” Bohac said.

While the National Guard is looking to boost recruiting, Hokanson said its retention rates have increased at a rate higher than anticipated.

“We’re finding that our service members and women that are in actually see the value in what they’re doing, and they’re sticking around, or they’re staying longer,” Hokanson said.

About 80% of those who do join the National Guard come from a military family or have a friend or relative in military service.

“The good news, I would say, is if 80% know someone and they’re willing to come into the military and serve, they do see the value in serving their nation, and many of the opportunities that they provide. The bad side of that is there’s a lot of people that may not have that exposure to the military, which may be a great choice for them to help them develop leadership skills, training or just opportunities that they may not have otherwise,” Hokanson said.

To further improve retention, Smith said that National Guard’s attrition management branch issues exit surveys for all members who choose not to reenlist in the Army National Guard.

“Like any survey, it’s only as good as the number of people that actually participate. But we do have some information that kind of gives us indicators of why people are not staying in the guard,” Smith said.

The National Guard also faces a smaller pool of potential recruits. Hokanson said recent statistics show that only 23% of its “primary military” demographic of individuals aged 18-24 meet the requirements to join the military.

“There are certain things red lines that I would say that we cannot really sacrifice. On the military side, we cannot lower standards to the point where everyone cannot perform their duties. However, we do have to recognize what society is providing us,” Holmes said. 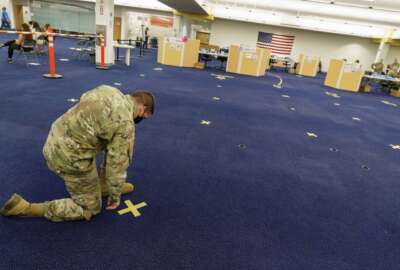 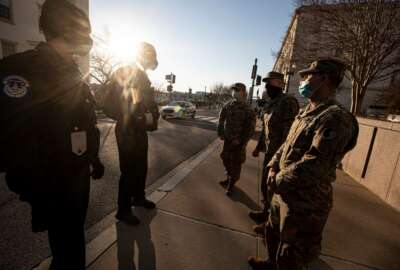 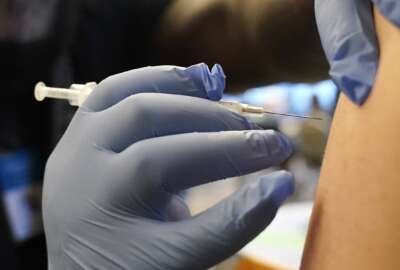