The department, more broadly, is also looking to recruit and retain the next-generation diplomatic workforce.

Brian McKeon, deputy secretary of state for management and resources, said Monday that the department’s workforce has almost fully recovered from an agency-wide hiring freeze implemented in 2017 under the Trump administration.

“When the Biden administration came in, we had significant deficits and vacancies in the civil service. I think we’ve mostly recovered from that,” McKeon said in a keynote address at the Professional Services Council’s Development Conference.

“We’re meeting a concern from the workforce that they’re overburdened and asking for help,” McKeon said.

Blinken has also prioritized building up the State Department’s workforce in response to surfacing challenges in American diplomacy over the coming decades. Those newly appearing areas include cybersecurity and emerging technologies, global health and climate change.

McKeon said the department is analyzing the skills gaps in its workforce related to these emerging issues, and looking at ways to bring these in-demand skills into the department.

“We’ve done some work on analyzing what are the gaps in our workforce for some of these issues, and asking the question, do we need to recruit a whole bunch of specialists, or can we train our generalist corps, or a little bit of both?” he said.

To upskill its workforce, the department is investing in a “training float,” a concept former Secretary of State Colin Powell envisioned for the continuous professional development of U.S. diplomats. In practice, the training float ensures a set number of employees undergo training at any given time, without sacrificing front-line readiness at their posts.

McKeon said about half of the new Foreign Service positions the department plans to hire as part of its 2023 budget request will go into the training float. The department, he added, is also starting up a training float for civil-service employees, which will give them an opportunity to enroll in workforce rotation programs and other professional development programs.

“When I got briefings during the transition, I asked what happened to the float. The answer was it was eaten by Iraq and Afghanistan,” McKeon said.

McKeon said the department’s leadership is also looking to empower all levels of its workforce to take “smart risks,” and move the agency away from a  largely “risk averse” culture.

“Terrorist bombings over the last 30 years and investigations that have followed terrorist incidents has led to a culture of risk aversion in the department. We’ve hunkered down in these big fortress embassies and [are] reluctant to go out into dangerous parts of countries to do what we need to do, because diplomacy and development are a contact sport,” McKeon said.

The department, as part of this effort, is on a multi-year initiative to upgrade the security of its most vulnerable positions.

McKeon said that in the last three months alone, the department has moved 1,000 personnel to safer facilities. This work also includes improving the resiliency of facilities in earthquake-prone regions.

“It has not gone as fast as I think everyone hoped, but that’s usually the case with big, complicated construction projects. And we’ve lost a little bit during the pandemic, for obvious reasons, that the work slowed down in a number of these projects. But we’re now in a place where we are, I think, back on pace and we’ve opened a lot of new secure facilities in the last six, eight months.

The State Department is also taking steps to shift to a hybrid work environment.

The department earlier this year launched a mobility assessment tool that allows supervisors and managers to determine the amount of telework allowed for each position.

McKeon said the tool maximizes telework for civil service employees who want it. He said other federal agencies have “been a little bit arbitrary” with telework by setting a maximum number of telework days per week or pay period for their entire workforce.

“Not surprisingly, the first run through this, we had somewhat uneven results. Like positions and like bureaus didn’t always have the same outcomes. And there’s a tension and maybe a generational challenge within the department, that people are used to people being in the workplace, being in meetings, and think that in-person meetings are better for brainstorming and mentoring and professional growth, and all of that. But it’s clear that our workforce is demanding more flexibility,” he said.

McKeon said the department offers “situational telework” for employees overseas, but added that telework is generally reserved for its domestic workforce.

“We pay a lot of money to train and support and send our officers and their families overseas, pay for their kids’ school. I think we’d have a lot of explaining to do to Congress, if it turns out they could do their jobs from their apartments, or from here,” McKeon said.

The department is rethinking telework to build on pandemic-era lessons about the future of work, as well as looking to retain employees seeking greater work-life balance.

McKeon said internal workforce surveys show that “significant numbers” of its employees are thinking of leaving the agency soon, although its current level of attrition tracks with historic levels.

“It doesn’t mean they will leave,” he said.” “I think it’s definitely a factor in retention. You know, 20, 30, 40 years ago, foreign affairs professionals, they had fewer options than they have today. There are just so many other opportunities for them. We can offer good pay and health care benefits and a pension … but people want flexibility, and if we’re not offering it to them, some people will go elsewhere.” 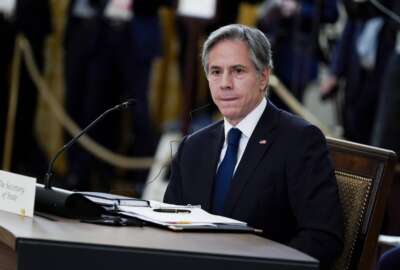