Fewer than 70 employees from the Agriculture Department’s two research bureaus who were tapped to relocate to Kansas City by the end of the fiscal year have so far made the move.

As of the initial Sept. 30 report date, 16 employees from the Economic Research Service have relocated to Kansas City, a USDA spokesperson said Friday in an email to Federal News Network. ERS has also hired 15 new employees to begin positions at...

Fewer than 70 employees from the Agriculture Department’s two research bureaus who were tapped to relocate to Kansas City by the end of the fiscal year have so far made the move.

As of the initial Sept. 30 report date, 16 employees from the Economic Research Service have relocated to Kansas City, a USDA spokesperson said Friday in an email to Federal News Network. ERS has also hired 15 new employees to begin positions at Kansas City, bringing ERS’ total at the new headquarters to 31.

Back in Washington, 74 ERS employees remain. An additional 38 employees have delayed relocation orders and could move at another date, the department said.

The situation looks much different at the National Institute of Food and Agriculture, where 45 employees have relocated to Kansas City, USDA said. NIFA has managed to hire 4 new employees to come work at the new headquarters, where the total workforce sits at 49.

19 NIFA employees remain in Washington, plus an additional 22 employees who have delayed relocation orders and could move at a later date, the USDA spokesperson said.

As Federal News Network reported last month, USDA asked employees on six ERS and NIFA teams, including employees who had either accepted or declined relocation, to continue working in Washington through Dec. 9 or March 30, 2020.

The change in report dates could jeopardize buyout offers for the eligible employees who had already declined relocation, planned to leave the agency before Sept. 30 and accepted incentives worth $10,000.

“In addition to these relocating employees and new hires, both agencies are utilizing short-term contractor support and employees on detail from other agencies as part of the department’s strategy to help ensure mission continuity through the transition,” the spokesperson said. “Additionally, we have well over 100 active recruitments in process between both agencies.”

The department didn’t respond to questions about how many ERS and NIFA employees had left their respective research agencies.

But using the data USDA provided back in June when Agriculture Secretary Sonny Perdue announced his plans to relocate ERS and NIFA headquarters to Kansas City, the picture looks grim — or at the very least, falls well short of initial expectations.

The department in June said of NIFA’s 315 positions, 294 would relocate while 21 would stay in the Washington region. Out of ERS’ 329 positions, 253 employees would make the move to Kansas City while 76 would remain in the national capital region.

Using the headcount the department took Monday, ERS has a total workforce of 143, 186 fewer employees than the 329 positions USDA described in June. Using those figures, ERS appears to have lost 57% of its workforce.

At NIFA, the picture is more dire. Using the department’s figures from Monday, the bureau has 90 employees on board, 225 fewer than the 315 positions USDA described back in June — a loss of 71%.

Sen. Debbie Stabenow (D-Mich.), ranking member of the Agriculture, Nutrition and Forestry Committee, said lack of staff at the two USDA research bureaus had delayed implementation of the farm bill and slowed the process of issuing grant money to previously identified recipients.

“It seems counterproductive to terminate current employees to simply hire others back on a part time basis when the USDA already has enormously high vacancy rates,” Stabenow wrote in a Sept. 27 letter to Perdue. “I request a thorough explanation of how the department plans to fill its capacity for both NIFA and ERS.”

Sen. Ben Cardin (D-Md.) told the the Federal Drive with Tom Temin he and other colleagues were still trying to block the USDA relocation.

Meanwhile, lawmakers are also turning their attention to another planned agency relocation, this time at the Interior Department’s Bureau of Land Management.

More than 300 BLM headquarters employees are supposed to move from Washington to either Grand Junction, Colorado, or one of several other western states.

About 60 BLM employees are expected to stay behind in Washington but will move to Interior’s main building in the District, the bureau has said. The lease for the BLM building on M Street in Washington expires at the end of 2020.

“Between this bill and the strong statement made by the House to oppose the reorganization, the administration would be well-advised to stop trying to ram these changes through and actually work with Congress on a good-faith basis,” Sen. Tom Udall (D-N.M.), ranking member of the Interior and Environment Appropriations Subcommittee, said at a bill markup last week.

“The BLM relocation is moving full speed ahead,” an Interior spokesperson said late last month. “As previously approved by Congress, we have the means to complete this relocation and establish the new headquarters in Grand Junction, Colorado. The department intends to give BLM employees their legally authorized compensation and incentives, but ultimately it is up to Congress to decide if they want to deny these benefits to our employees.” 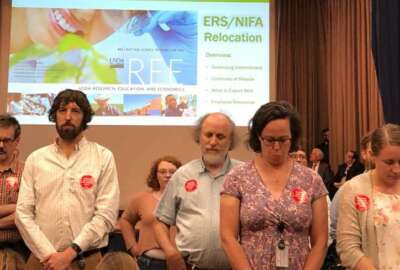