Despite some congressional opposition, the Interior Department is picking up the pace now to relocate much of the remaining employees at the Bureau of Land Management’s headquarters in Washington to Colorado and several other western states.

Both the Interior Department and BLM implemented a departmentwide hiring freeze last month to keep other positions open for employees who...

Despite some congressional opposition, the Interior Department is picking up the pace now to relocate much of the remaining employees at the Bureau of Land Management’s headquarters in Washington to Colorado and several other western states.

Both the Interior Department and BLM implemented a departmentwide hiring freeze last month to keep other positions open for employees who may opt out of the relocation, William Perry Pendley, the agency’s deputy director for policy and programs, told lawmakers Tuesday.

“It is my desire, it is the secretary’s desire, that we not lose a single employee,” he said during a House Natural Resources Committee hearing on the BLM relocation. “Our effort is to ensure either employees are able to go to a more fulfilling job out west, where they have a lower cost of living, increased purchasing power [and] shorter commute times, and they have availability to the resources that we, as westerners, love to enjoy. If they are not able to do that we want to find them a home in the Department of Interior.”

The department would likely grant employees priority consideration for other positions within Interior, a step the Agriculture Department took this summer to transition its own employees who had declined relocation to Kansas City.

The proposed BLM relocation, on paper, looks slightly different than the one USDA will make at the end of the month. Unlike USDA, BLM is planning to move its headquarters employees to a variety of locations across the country.

While 27 positions are expected to move to a newly established headquarters in Grand Junction, Colorado, nearly 300 employees will be asked to move to one of several western states.

The bureau is planning to inform the workforce next week about what specific positions will relocate. BLM will notify impacted employees and will work closely with them to walk through their next steps, Pendley said.

“BLM values every employee, and we are ensuring each affected employee received necessary information before being required to make any decision,” he said. “We assembled and made available to employees teams of skilled human resources professionals to provide knowledgeable and compassionate assistance. We also scheduled  employee assistance program counselors to support one-on-one affected employees and their families throughout the days and weeks.”

The bureau estimated about 45 employees would retire or leave the agency due to the relocation. The estimate was based on a projection of retirement eligibility, Pendley said, but he’s confident workers would choose to stay longer to take part in the relocation.

But like the USDA move, the process that BLM and Interior officials are taking to inform and convince lawmakers of the relocation will look remarkably familiar.

Neither Interior nor the bureau has finished an analysis of the potential impacts of the BLM relocation on its employees, Pendley said.

“[There’s] no analysis, simply because we’re hoping these people will stay with us,” he told committee Chairman Raul Grijalva (D-Ariz.). 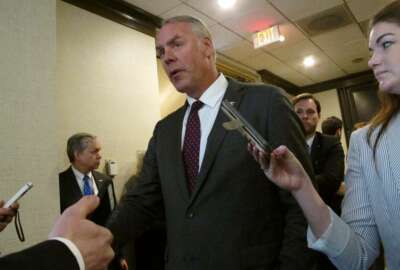 Pendley later reiterated: “We do not want to lose a single employee.”

Grijalva pressed Pendley on the potential for staffing issues and recalled comments from White House Chief of Staff Mick Mulvaney, who in August had described the USDA move as a way to get rid of federal employees.

“Suspicions about motivation in terms of why this moving is going on … abound, and they should, given the fact there’s been no transparency on it,” Grijalva said. “To this date, the full justification, rationale, data, whatever could be produced, has not been produced for the committee.”

The bureau expects the moves will save the agency locality pay and rent and real estate costs. The agency spends about $50 per square foot for its existing BLM building. Real estate costs in Grand Junction, however, range from $28-30 a square foot, Pendley said.

Beyond the anticipated cost savings, which the bureau expects will total $90 million over the next 20 years, Pendley said BLM relocation would move its top career experts to the field.

About a dozen of BLM’s senior executives, roughly 125 GS-14s and a few dozen GS-15s are expected to relocate, he added.

“We need them out in the field to answer the concerns of western members of Congress and governors, local leaders, tribal leaders and stakeholders to say, ‘You need to staff up,'” Pendley said. “We need your best people here. We’re going to see better relationships with our stakeholders. We’re going to see a better understanding of western communities, and we’re also going to see decision making [and] problem solving earlier in the process. Instead of waiting for a problem to blow up when it reaches M Street or headquarters, we can solve that problem by meeting with local people and having our top people out there.”

Democrats on the House Natural Resources Committee were less than thrilled by the prospects of the BLM relocation.

About 97% of the BLM workforce already works outside the Washington metro area. D.C. Del. Eleanor Holmes Norton said it made sense for the vast majority of the employees to work in the field, but she couldn’t understand why the department would put so much time and effort to relocate the remaining 3% of the workforce.

Committee Republicans, however, largely praised the move. They extolled the benefits of Grand Junction as a new site for the bureau and were enthusiastic about Interior’s plans to “drain the swamp.”

“I very much appreciate this administration’s efforts to drain the swamp and to help push as much of the federal workforce outside the D.C. Beltway,” Rep. Jody Hice (R-Ga.) said. “I think this is a great idea.”

For Grijalva, his skepticism of the BLM relocation isn’t about Interior’s choice of Grand Junction.

“I don’t think it’s a question of distrust of the people of Grand Junction,” he said. “They’re fine people. We don’t have a problem with that. It’s the distrust that’s centered on this administration, their motivation and what’s really behind the move.”