The $690.2 billion bill — $10 billion more is provided in a separate military construction bill — would still give troops a 3.1 percent increase in pay, increase operations and maintenance funding compared to 2019 to build readiness and invest more in research and development for cutting edge programs.

The appropriation would be an increase of nearly $16 billion compared to last year’s budget.

There is also a chunk of about $33 billion that is appropriated in another bill that is considered part of the defense budget, but goes to the Energy Department and other agencies and not to DoD itself.

“The bill ensures that our service members are trained and equipped to do their jobs safely and effectively and that they are prepared for future military needs,” House Appropriations Committee Chairwoman Nita Lowey (D-N.Y.) said in a Tuesday statement. “We have the most capable and advanced military in the world and this bill honors their mission by adequately funding programs to care for service members and their families.”

The Trump administration originally asked for $750 billion in defense funds. Some of the money, however, would be used to build a wall along the southern border and to keep troops there.

The bill does away with that emergency spending and finds ways to trim the budget by cutting about $3 billion from the research and development request. It also lowers active duty end strength by 600 compared to 2019 and 2,000 compared to the request. Operations and maintenance funding is about $37 billion less than what was requested. Procurement and personnel funding remain about the same as the budget request.

The appropriations legislation is also the first step in what could be a budget showdown coming in October.

The committee moves $88.2 billion from the emergency overseas contingency operations (OCO) fund — an account not beholden to sequestration caps — and puts that money into the base budget.

The $622.1 billion in base funds is well above the sequestration caps. If the bill passes the House, it will force a lot of debate over how to handle sequestration before October. Congress will have to raise the budget caps if the money stays in the base budget or face across the board cuts mandated by the 2011 Budget Control Act.

The Trump administration tried to skirt sequestration altogether by putting $98 billion of base funding in OCO. Democrats called the tactic a gimmick. Using base funds for OCO has been criticized by both sides in the past. Military officials noted that OCO funding is only planned out for one year, and therefore hurts DoD’s ability to plan ahead.

The committee’s rebuke of the White House budget didn’t just stop with the way it is funded. The bill severely limits how the executive branch can move money around within DoD as well.

The bill reduces DoD’s reprogramming authority to $1.5 billion and also reduces the thresholds for reprogrammings approved by Congress beforehand.

The reprogramming issues come from DoD’s transfer of funds to build sections of the wall on the southern border without congressional approval.

The House defense appropriations bill is only one of four bills that will come out this year to have an impact on the defense budget.

The Armed Services Committees still need to release their authorization bills and the Senate Appropriations Committee will release its bill as well.

It’s likely the Republican-held Senate committees will authorize and appropriate above $700 billion and possibility as high as the White House request of $750 billion.

Parts of the defense budget that fall under the Energy Department and other agencies fills in the rest of the $33 billion.

“It’s a not insubstantial number. If you take out the roughly $10 billion in emergency spending that’s folded in, you’re not that far apart on the budget numbers. I don’t see that being a problem, but we will have to find savings in some places, obviously.”

The $10 billion Smith is referring to is the money DoD requested for emergency spending that would be used mostly to build the wall along the southern border. It would also refill military construction accounts it plans to use for wall construction in 2019 under the president’s emergency declaration. 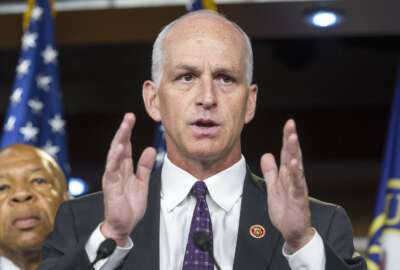 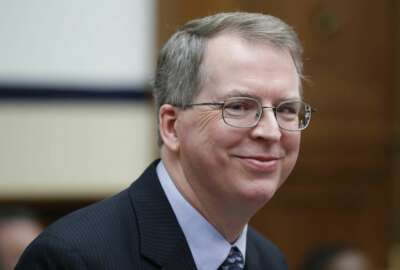