“The proposed changes will benefit both...

“The proposed changes will benefit both agencies as well as individuals seeking to reenter the federal workforce as the proposed rules seek to encourage individuals who have gained additional skills and experiences to reenter the federal workforce at grade levels equal to the grade levels they actually qualify for, not for grade levels they previously qualified for,” OPM wrote in the proposed rule. “Any restriction on the promotion potential of the position may be a disincentive to attracting needed with the desired skills and/or experience.”

This has long been a point of frustration for human capital practitioners in government, who say the existing structure offers talented employees who have since gained valuable skills and expertise in the private sector, for example, no incentive to reenter federal service.

Agencies today typically have little to no discretion to rehire former employees at a higher grade than the level they left government with.

But under OPM’s new proposed regulations, agencies would have the flexibility to non-competitively reinstate former employees at any grade level which they are qualified — under certain circumstances.

Former employees who want to reenter federal service must have been separated from government for at least year and must have received a performance rating of at least “fully successful” to qualify for a reappointment, according to OPM.

OPM’s governmentwide qualification standards already require competitive service employees have at least one year of specialized experience before getting a promotion to the next grade level. Similarly, requiring separated employees to also wait one year before returning to federal service at a higher grade level, OPM said, should prevent employees from purposely quitting for the sole purpose of getting a promotion.

OPM said this rule should preserve “a measure of fairness with respect to current employees.”

The performance standards are in place, OPM said, that should ensure agencies offer promotion opportunities to top-performing former employees.

“If the individual was not performing to expectations at the time she or he left federal service, that rationale for liberalizing the rules for re-entry would not be present, and we would want agencies to put the candidate through a more rigorous process to accurately evaluate current capabilities before hiring the individual again,” OPM’s proposed rule reads. “An individual whose most recent evaluation was less than ‘fully successful’ would have been headed for potential demotion or termination if she or he had remained.”

Employees who don’t meet these criteria can still apply for reinstatement competitively, meaning they’d be vying for a position along with the rest of the candidate pool.

Taking another job in federal service with no higher grade or promotion potential is also an option, OPM said.

OPM’s new proposed regulations build on other administrative and regulatory changes the agency has made under the President’s Management Agenda to help agencies more quickly recruit and retain the right talent. OPM over the last year or so has granted new direct-hire authorities for certain IT, cybersecurity and science positions and has, in some cases, given agencies the discretion to grant direct-hire authorities on their own.

Much of OPM’s attempts at creating a more flexible federal workforce, however, have stayed within the scope of the current, decades-old classification system.

Margaret Weichert, deputy director for management at the Office of Management and Budget, has expressed open frustration with the rigidity of the General Schedule, which marked its 70th birthday earlier this year.

The limitations of the General Schedule became especially apparent earlier this year, when a vast majority of the students in the first cohort of the Trump administration’s Federal Cybersecurity Reskilling Academy graduated the class with flying colors but couldn’t get placed in a position relevant to their new skill sets.

For many of the reskilling academy graduates, finding a federal cybersecurity job would, in many cases, mean taking a position at a lower grade and pay level.

Reskilling graduates could, as Weichert has pointed out publicly, accept a cyber position in the private sector. But until now those graduates didn’t have an incentive to return to government, unless they wanted to accept another job at the same grade level they had upon leaving federal service.

Of course, these new regulations wouldn’t address all of these challenges. They don’t address how agencies could, for example, move current, reskilled employees to new positions with higher grade levels without leaving federal service. And they don’t, as human capital practitioners have suggested, allow government to create a “talent exchange” with the private sector, where professionals can move seamlessly between the sectors.

The public comment period on OPM’s proposed rehiring regulations is open for 60 days. 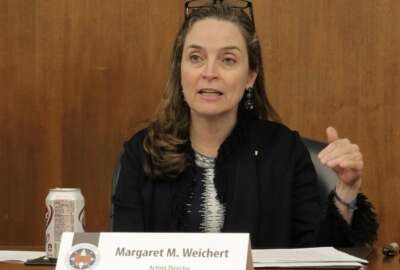