During a presentation at the annual Air Force Association conference,...

During a presentation at the annual Air Force Association conference, Roper mentioned the successful flight demonstration almost in passing. More interesting to him is the design process that led up to the production of the first airplane: It is the first major system to be produced via digital engineering.

“I can’t tell you how much of a paradigm shift this is. It’s going to change everything,” he told reporters during a roundtable. “But it’s really exciting, because we’ve needed something like this in acquisition for decades.”

It’s not the Air Force’s first foray into building “digital threads” for its real-world systems. The service has taken a similar approach with its T-7 trainer aircraft and the Ground-Based Strategic Deterrent system. But he said NGAD was the most “radical” to date.

The approach involves building an “eSystem” — a digital version of the real-world system the military plans to produce — and testing, prototyping and adapting it in a virtual world before the first physical system is ever built. The result, Roper said, is that the first real-world version that rolls off the assembly line is as good as the 100th would be under a more traditional acquisition and design approach.

Roper said the “eSystem” approach would become the Air Force’s standard way of doing business from now on. Also on Tuesday, he released a how-to guide for “digital acquisition” to push his own workforce in that direction.

“Why would I ever want to create a new program where we didn’t go build an e-system? It’s truly magical,” he said. “It’s letting us do things I would have never thought of doing in the past, like killing the assembly learning curve. In the past, that was just accepted like a law of the universe — people have to get better at doing things, and the only way to get better at doing them is by doing them. Well, now you can get better by ‘e-doing’ them. You can digitally learn. And I’ve watched it now. It’s not hypothetical.”

Roper sees the digital design model as a very promising cure to a deep, underlying problem in the Air Force’s acquisition system that he’s repeatedly complained about during his time as assistant secretary for acquisition, technology and logistics.

Today, new aircraft programs only come along every decade or two, and they’re enormous. Programs like the F-35 require vast amounts of up-front investment by competing bidders, partly because they’re expected to serve the military for decades and because they’re so high-stakes.

Roper said that’s the biggest reason 70% of the Air Force’s acquisition budget is tied up in sustaining old weapons systems instead of buying new ones.

“Once a vendor has put their own money on the table, they have to get it back in sustainment, so we get sustainment-dominated business cases,” he said. “We end up in sole-source modernization situations, tail-chasing the threats, and the cycle continues. We will not compete against nations like China and Russia if we are trapped in this vicious circle.”

But Roper said moving a good deal of the traditional design and prototyping work to the digital world — eliminating the cost of actually building an airplane and its associated systems before they’re ready — would let the Air Force conduct more frequent competitions, since the military and the defense industry will be able to continuously design and improve systems without time and money involved in building physical items. Something like a DevOps process, but for military hardware.

“Digital engineering seems to accelerate everything,” he said. “The big thing I’m seeing across programs that are doing it right is that integration risk is an order of magnitude less. That allows us to run more in parallel, and be able to have acceptable risk while doing it. That allows engineering to happen longer with no penalty, because we can collapse the [steps in the acquisition process] to run in parallel instead of in series. So engineers get to be engineers for longer. Technologies get to be explored for longer using these digital tools.”

Roper argued the “eSystem” approach also has major implications for the military’s ambitions in the areas of artificial intelligence, machine learning and autonomous systems.

Those technologies can’t work without vast amounts of data about the real-world platforms they’re supposed to be interacting with and aiding in decisions about. But if a weapons platform has already been designed, tested and integrated with all of its logistics and enabling technologies in a digital world, most of that data is ready to go before the first physical copy emerges from a factory.

“The AI algorithm gets to learn from the digital simulator itself – that’s why this is such a powerful model. These digitally-engineered systems can produce learning at machine speeds,” Roper said. “So as we bring AI into the force, these digital environments are going to have even more value. If we’re training AI at real-world speeds, we will lose. We have to train much, much faster than real time. So this even transcends where we are today, building things better. It’s going to ultimately be a foundational layer that enables us to finally start bringing in AI as a competitive domain in the military.” 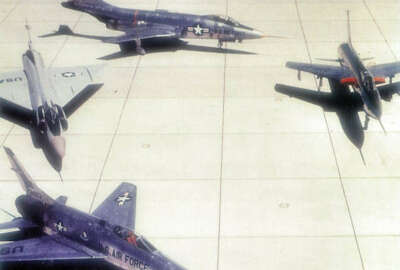 Building planes like iPhones: How the Air Force can adapt to rapidly-changing technology