Will Roper, assistant secretary for acquisition, technology and logistics, is planning the advanced battle management system (ABMS) around a testing period every four months that will demonstrate the ways individual systems within ABMS work together.

“We want to run the programs that will be used in ABMS through the wash cycle...

Will Roper, assistant secretary for acquisition, technology and logistics, is planning the advanced battle management system (ABMS) around a testing period every four months that will demonstrate the ways individual systems within ABMS work together.

“We want to run the programs that will be used in ABMS through the wash cycle asking not just, ‘Are the capabilities developing and progressing, but do they work together?’” said Preston Dunlap, Air Force chief architect, during a Tuesday roundtable with reporters at the Pentagon. “We are trying to integrate the Air Force together, and then work with our partners and other services and allies around the globe to bring capabilities together.”

ABMS is a collection of 28 programs that follow a progression of picking up information through sensors, turning that into data, processing the data, translating it so it can be understood by multiple systems, feeding it to apps that can be used by troops and finally integrating it into warfighting capabilities.

The goal is an internet-of-things approach that will allow, for example, a drone to pick up information on an enemy and share and process that information to people in the field so they can make immediate decisions.

Roper told reporters that the Air Force looked at the sequence of phone calls that need to be made for decisions to happen today.

“There’s so many people in between information, moving between different nodes in the decision chain,” Roper said. “The idea with ABMS is that the people are no longer the glue. The information flows everywhere all at once. The people are the assessors, the analyzers, the feedback providers that help the analytics that are doing the pushing to get better and better.”

ABMS will lay the groundwork of systems and connectivity through the cloud so the military services can use things like artificial intelligence to process information and deliver important information to troops on the edge. It’s similar to how the traffic app Waze takes in information from multiple sources to give you updated traffic information. However, the military is not yet as savvy as industry when it comes to having the systems in place.

“We’ve been talking a pretty good talk in the Pentagon, but we have very little artificial intelligence that would go to war today. We haven’t laid in the digital infrastructure to enable it,” Roper said. “That means cloud, that means transport, that means software-defined systems that are adaptable, all things that we enjoy when we leave the Pentagon and go home.”

Eventually, major systems will plug into ABMS. Roper said he hopes to incentivize program managers to jump onto ABMS early, and then peer pressure those who are taking longer.

ABMS’s first four-month test took place in December. The Air Force is working with the combatant commands to test the operational viability of the programs.

Dunlap said the first test, which was in conjunction with U.S. Northern Command, demonstrated four firsts for ABMS.

The Air Force passed data back and forth with the Navy between two fifth-generation fighter jets using a translating link, it pulled in data from a low-earth-orbit satellite for the operation, it used a cloud-based command and control application instead of a local app and, finally, made command and control mobile by working from a tent.

Roper said the demonstration actually didn’t have enough failure as it tried to link in 28 systems to ABMS.

“Twenty six of 28 things worked. That is too high of a success rate,” Roper said. “We should be taking more risk than that. We had a few issues with camera feeds we were using to show where special operations forces were. U.S. Special Operations Command also had some robot dogs that are able to patrol, but we were never able to patch their feeds in.”

Roper added that he hopes industry sees ABMS as an opportunity.

“I hope industry will see in ABMS a pot of money that is for connecting things,” he said. “Both new things and legacy things and it is open for competition three times a year outside of the normal budget cycle.” 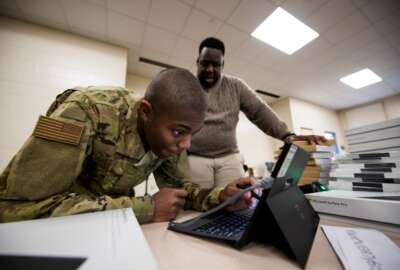