How to blow an agency reorg

By now everyone knows of the fiasco of the Agriculture Department’s attempt to move two small policy bureaus to Kansas City. As Federal News Network’s Nicole Ogrysko has been reporting, half the staff selected to move has left the agency. Many joined agencies so they wouldn’t have to relocate. Ag management screwed up the buyout offer by yanking back half of...

By now everyone knows of the fiasco of the Agriculture Department’s attempt to move two small policy bureaus to Kansas City. As Federal News Network’s Nicole Ogrysko has been reporting, half the staff selected to move has left the agency. Many joined agencies so they wouldn’t have to relocate. Ag management screwed up the buyout offer by yanking back half of the promised $25,000 because too many people took them up on it.

The episode gives Kansas City a bad name, and no one was certain whether the agencies would end up permanently in Kansas or Missouri. The move inspired employees to join one of the federal unions.

Sadder, though, is that the move itself isn’t necessarily a bad idea. At least it merited serious discussion. I don’t doubt that Secretary Sonny Purdue gave it a lot of thought and was well motivated. Perhaps nothing he might have said or done would have convinced the people of the Economics Research Bureau or the National Institute of Food and Agriculture this was a good idea.

Now the move is sort of a hash. USDA has delayed Kansas City reporting dates and asking relocation refuseniks to stick around in Washington. A spokesperson said USDA is concerned with mission continuity.

Equally troubling is the stuck-halfway reorganization of the Office of Personnel Management. Its National Background Investigations Bureau moved on Tuesday, under a new name, to the Defense Department. The move deprived OPM of $70 million in revenue, which Congress mostly plans to compensate with appropriations — that is if it can actually pass a budget for 2020.

The Trump administration wanted to move the remainder of OPM under the General Services Administration, with the federal employee policy functions moving to the Office of Management and Budget, a la the Office of Federal Procurement Policy. Members of Congress range from against the idea, to wanting to see more detailed plans, to “meh.”

The result? As you might expect: Low morale and an exodus of leadership streaming out of OPM. One official told FNN, “Morale is extremely through the floor.” Where I live, that’s the basement.

OPM has never been federal employees’ favorite agency. Its service on retirement benefits has been spotty, it had the famous data breach in 2015, and it sometimes botches snow-day announcements. It’s often slow to come up with specific procedures for new policy, like phased retirement. But it does do good. And in the world’s largest employer — the US government — it makes sense to have an agency responsible for the needs of more than 2 million civilian employees. Here again, OPM’s mixed heritage at least merited a discussion about what to do with it.

Now 2020 appropriations language would prohibit the merger with GSA. The administration insists the merger will happen. The outcome is all mixed up with separation of powers, failure to consult one another, and the bigger maelstrom of our divided politics.

The reorganization of the Overseas Private Investment Corporation, the acronym for which sounds like a Capitals loafing play, happened, from what we can tell, smoothly and with little outcry or drama. OPIC is about to get a new name: The U.S. International Development Finance Corporation, or DFC. In fact, that also happened Tuesday. In so doing the new DFC incorporates a piece carved out of the U.S. Agency for International Development and follows a law supported by the Trump administration signed in 2018.

My interview with USAID’s Karl Fickenscher details what’s going on. But the basic idea is to give OPIC wider investment options and tie it more closely to U.S. foreign policy. Everybody who’s in Washington stays in Washington.

The contrast between OPIC and the OPM and Agriculture episodes offers some lessons, if anyone learns them: 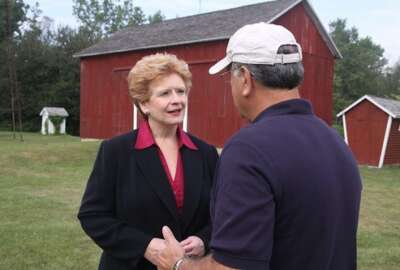