Congress is taking a serious interest in a landmark report on military personnel released earlier this year.

Members of the Senate Armed Services Personnel Subcommittee found family life and flexibility to be underlying issues for a lot of the military’s personnel woes as the lawmakers questioned some of the minds behind the study.

The report caused a stir when it came out in March due to the number of former top Defense Department officials who participated...

Congress is taking a serious interest in a landmark report on military personnel released earlier this year.

Members of the Senate Armed Services Personnel Subcommittee found family life and flexibility to be underlying issues for a lot of the military’s personnel woes as the lawmakers questioned some of the minds behind the study.

The report caused a stir when it came out in March due to the number of former top Defense Department officials who participated in the study, including former Marine Corps Commandant Jim Jones, former Sen. Jim Talent, former Defense Secretary Leon Panetta and Kathy Roth-Douquet, CEO of Blue Star Families.

While the report covered everything from civilian unions to subcommissaries to health care, lawmakers seemed focused on a narrower set of interests. Recruiting cyber talent, shoring up the Air Force’s pilot shortfall and bettering childcare all were at the top of the subcommittee members’ minds.

But lawmakers soon found that problems with military personnel are entangled in a large interconnected web of issues. Take the military’s troubles in recruiting and retaining cyber talent as an example.

“All the branches are struggling to build and maintain new cyber units,” Talent said as he testified alongside Roth-Douquet and Defense Business Board member Arnold Punaro. “And as far as we can tell and as far as we were able to determine in our deliberations, it’s not because young people are opposed to service in the military, it’s because they have never really engaged with the idea. And we think that’s largely because the department is not doing as good a job as it should of engaging with them on a broad spectrum. … The underlying problem, as the ranking member said, is that the current military personnel system was developed in World War II.”

Family life seemed to be the bottom line for a lot of military issues, the authors of the report said. Employees with cyber skills want to be able to move between the civilian and military world, they want quality childcare for their children and they want their spouses to be happy and be able to work where they are stationed.

But those wants can be plugged into any area where the military is hurting on the personnel side. The Air Force’s pilot shortage, the lack of Navy’s nuclear qualified officers and the Marine Corps’ shortfall in sniper scouts can all be tied to the rigidity of the military’s personnel system.

“If the military is going to recruit and retain a volunteer force with the necessary skills, it needs to do two things. It needs to recruit, assign and promote in a way that develops and retains value across a wide range of skills including the highly technical skills, and it needs to better accommodate the evolution of American society and the American family. And it needs to do those things without sacrificing the aspects of the system that are working well,” Talent said.

The subcommittee seemed open to lateral entry programs for occupations needing personnel. Lateral entry would allow a civilian to enter into the military at a rank that commiserates with their level of expertise.

Another solution the subcommittee seemed particularly interested in is bettering childcare.

The study suggests public-private partnerships to take care of the childcare issue.

However, the elephant in the room was the Defense Officers Military Personnel Act, a law that created the military’s “up or out” system, where service members must promote or leave the military.

“The system basically assumes that everybody in the service wants to eventually become chief of staff,” Talent said.

“If they’re pushed into a system where they have to train, have to do things that aren’t part of their vocation and their love or if they’re pushed out because they’re not being promoted according to the terms of that system then we lose them,” Talent said.

The House and Senate Armed Services committees are preparing provisions for the 2018 defense authorization bill. If the committees try to make any personnel changes, they will likely be put into that bill. 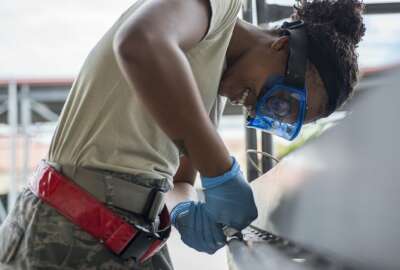