Webinar
During this exclusive webinar Lt. Gen. Michael Groen, the director of the Joint Artificial Intelligence Center at the Department of Defense, will discuss JAIC's IT strategy and AI opportunities for the future.
Register Now

Three years into the Defense Department’s plan to put artificial intelligence to more strategic and tactical use, the center charged with this job has moved on to phase three of its lifecycle.

The Joint AI Center began by building capabilities and promoting adoption when DoD created it in 2019. Phase 2 included the acceleration of the adoption of AI across every aspect of the military’s warfighting and business operations and to actively seek and solve problems.

While Lt. Gen. Michael Groen, the director of the JAIC, hasn’t officially called this phase 3, he said the latest shift is focused on enablement of AI capabilities.

“We started to offer a whole range of enabling capabilities to help organizations across the department and that includes all the services obviously, but think about all of the agencies in the Department of Defense, like the Defense Health Agency or the Defense Logistics Agency or the Defense Contract Management Agency, all of these organizations really driven by data and really have data at their heart for their mission accomplishment,” Groen said on Ask the CIO. “We’re able to reach out into those organizations and then help them find their path to self-sufficiency in the AI space and in the data space.”

And that move toward self-sufficiency is part of the reason why Groen doesn’t buy into the recent criticism from former Air Force Chief Software Office Nic Chaillan that the U.S. is in danger of losing the battle for AI technology to China and other near-peer competitors.

Groen said while China may have some advantages as an organization, the United States’ ecosystem that promotes economic innovation as well as world-class universities and academic research help put the nation on a solid path to continue to lead the world in using AI and with AI-related technologies.

“I think there is no doubt that this is hard work. At the Department of Defense, the bones of the department and our processes is in hardware acquisition and building new hardware platforms. Well, we have a pretty major transition now when we start talking about software-derived capabilities, and so the Department of Defense needs to become a world class software organization. That doesn’t happen overnight,” he said. “There’s lots of bureaucratic inertia that has to be overcome so that we can get momentum to that. Some people get frustrated by that and throw in the towel. I think the vast preponderance, I mean, especially the people that are listening to this, are folks who recognize how hard this is, are working hard and they’re dealing with all of the really tough challenges, most of which are cultural, not technical. I think that’s the real measure of our competitiveness: do we have the guts to stick it out and make this successful, and do it in a way that really does transform the operating model of the Department of Defense and how we do business? And I think we’re on a really good path to do that.”

The software mindset that Groen refers to means bringing agility and flexibility to DoD so it can create capabilities rapidly.

“How do we recognize what it means to be a software integration organization? The Department of Defense has not been one to date, it needs to be going forward. Those are the kind of cultural transitions and cultural transformations that we have to figure out,” he said. “Similarly, the budgeting process, if I’m talking to somebody about a software capability, and they say, ‘Yeah, I’ll get that into program objective management (POM) 2024,’ well you can’t respond in a dynamic software environment to something that you might get funded two years from now. We have to figure out how can we do this effectively?”

Another way the JAIC is trying to change the culture and shift toward enablement is through the AI and Data Accelerator (ADA) initiative. Groen launched the program in June with a goal of sending teams of data experts to all 11 of its geographic and functional commands. Their first task will be to take stock of their local information storehouses, including by cataloging the data feeds commanders currently use to make decisions, and that AI algorithms could potentially help with.

“ADA is probably the premier example of how we integrate data and AI capabilities together. The focus of our efforts is the combatant commands and the combatant command decision environment,” Groen said. “We know that joint force commanders today struggle with an overwhelming environment of data, an overwhelming decision environment. It would be hard to articulate the way we do integration today. It’s usually, if you can picture it in your head, rooms full of Airmen behind monitors with nine chat rooms open, and each one of them is looking at a stove pipe, one set of data, implemented through one algorithm or one system that produces one set of insights. Those chat rooms are cut and pasted into a PowerPoint slide, and a PowerPoint slide goes to a commander somewhere who now has to somehow bring all this data together in his or her head to make good decisions. That is not a modern way to make decisions. That is not a modern way to use data to help your decision making.”

Create once, use many

He said ADA is an experimental program that uses AI algorithms to build a decision environment for combatant commanders based on their priorities and challenges.

“ADA begins with a data environment so the chief data officer and that team are building what they call operational data teams, which will go to combatant commands and help commands with their data environment, help them make sense of the data to help them predict data flows and how they will have to use that data in a crisis environment. So the operational data teams are a key element on the front end to make sure that the data flows in the right way. Then we’re bringing in elements of AI through the Joint Artificial Intelligence Center, and then also through the Undersecretary for Defense Intelligence, Project Maven initiative, to bring AI capability now into this data environment,” he said. “Our approach is to take workflows out of the combatant command and then see where we can automate or accelerate those workflows through the integration of data, real human machine learning by taking a look at how decisions are made and how processes are conducted today.”

Groen said each time the combatant command and the data teams write an AI algorithm to support a decision process or a workflow, it becomes an application that will be made available to others, who may have similar problems.

All of these apps eventually will be put in a repository, or an app store, that JAIC will make easily searchable.

“Now you have the ability to not only solve multiple workflows at a combatant command, but you can also do it at scale because most of our combatant commanders have very similar challenges,” he said. “It’s in different parts of the world or with different functions, but you can now start to scale horizontally by fielding those algorithms or those apps, making those apps available, customizing them for combatant commands across the globe. Then you can scale vertically as well by adding more and more apps to the stack of capabilities, giving you an enterprise capability that responds to command needs.”

Join moderator Jason Miller and Groen as they discuss: 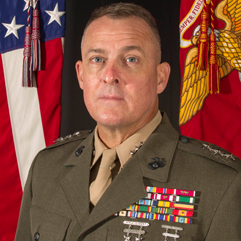