A podiatrist stood out as one of the top billers in the United States for a procedure to “remove skin and muscle.” But once investigators with the Department of Health and Human Services’ Office of Inspector General took a closer look, it turned out the doctor had overbilled Medicare and Tricare for the most routine procedure — cutting toenails — and later pleaded guilty for the $1.5 million scheme.

Using many of the same predictive analytics tools, another HHS OIG analyst in Miami was able to connect the dots with some of the field office’s data, and helped build a case that turned into a $35 million fraud scheme implicating several pharmacies and a home health agency.

When it comes to tracking down billions in fraud, waste and abuse each year, federal watchdog agencies have often faced an uphill battle trying to pin down the fraudsters. But through more sophisticated big-data tools, many of those same watchdogs now have an upper hand in bringing bogus health care claims to court.

The agency in April helped take down a scheme in Kentucky, West Virginia and Tennessee responsible for more than 350,000 opioid prescriptions and the disbursement of more than 32 million pills.

But more than anything else, Brzymialkiewicz said advanced data analytics tools have helped the IG office better decide where to commit its limited resources.

“If there’s a hotline complaint that comes in, if there’s suspicion of fraud … what we’re trying to do is use the data proactively to both identify potential targets, and also then triage those cases very rapidly,” Brzymialkiewicz said Sept. 18 at the Association of Government Analytics Fraud 19 conference in Washington.

These tools, he added, won’t replace auditors or investigators, but will serve as a force multiplier for the staff agencies already have.

“You can start to visualize where things are in a way that, I would say, if you just laid out all the numbers [in], let’s say in a standard Excel spreadsheet or something, it might not be as obvious,” Persons said.

Through these data analytics tools, HHS OIG has been able to run “reasonableness tests” on spending data to see if medical professionals have billed for services that would exceed their capacity.

“If I’m billing for a 15-minute procedure, and I’m claiming that I’m seeing 150 patients a day, that’s 2,250 minutes [and] there are only 1,440 minutes in a day, so that’s not reasonable,” Brzymialkiewicz said. “That opens up other questions about why is that happening. Are they not seeing the patients as long as they should be? What’s happening with that 15 minutes?”

The agency can also provide big-picture analytics through its Payment by Geographic Area (PAYGAR) tool, which overlays health care spending data on a map and flag areas where the average level of medical spending is double or triple the national average.

“If I’m looking at hospitals, providers, prescription drugs, whatever area I want to look at, I can zoom into a particular area in the country, and then I can get more information about the trends [and] the top providers,” Brzymialkiewicz said.

But the algorithm never tells the full story, and analysts can often find anecdotal information to explain outliers in the data.

For example, Brzymialkiewicz recalled that at a recent training, auditors saw a “spending spike” in certain areas because providers had encouraged seniors to get a vaccine for shingles.

“That was one of those cases where the data would have suggested, ‘Hey, something’s going on.’ And then there was a rational explanation for [that],” she said. 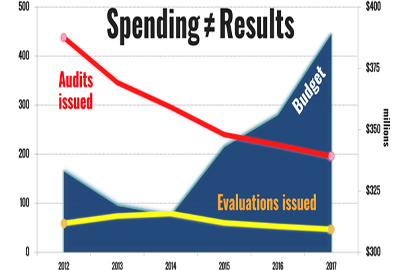 Why does HHS OIG’s budget keep rising as its output keeps falling?