Breaking down the barriers to improve cyber threat information sharing

By no means should that comment shock anyone who pays attention to the constant and ever-changing threat to public and private sector systems, networks and data.

But what Uggoretz’s comments did do is hit the nail right on the head when it comes to...

By no means should that comment shock anyone who pays attention to the constant and ever-changing threat to public and private sector systems, networks and data.

But what Uggoretz’s comments did do is hit the nail right on the head when it comes to this constant push and pull between government and industry to share what they know, when they know it and how to fix it in a trusted and secure way.

Over the years we’ve seen a host of pilot programs and attempts to ensure there is no monopoly. From Homeland Security Department’s Automated Indicator Sharing (AIS) program to the Defense Department’s DIBNET-S, which is a classified network for defense contractors to receive intelligence on threats to their companies, and the just recently announced National Risk Management Center from DHS, which aims to help break down some of the communication barriers that exist between the government and sectors when it comes to sharing cybersecurity threats, these and so many other approaches still haven’t helped agencies and industry finally break free from the culture and technical challenges they face with cyber threat information sharing.

The scale of the problem is incredible. I’ve been at Anomoli for about four years and when I first started here it was 200,00 or 300,000 indictors. Year two it was 2-to-3 million. Now it’s over 100 million indicators that everyone has access to on our platform.

We know that meant…key players dropped in the next couple of dozen patches that you need to put on right now. We know Patch Tuesday is preceded by Adversary Scan Wednesday. We know the adversary is already actively looking so our job is to look for any of those now known vulnerabilities for the systems we have, how fast we can patch and share what the adversary is focused on.” 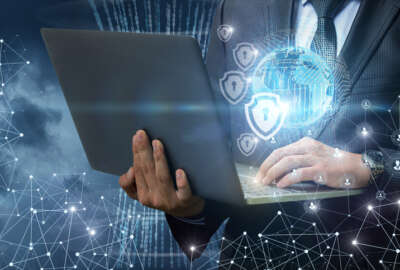 What is a Threat Intelligence Platform?

Email Spoofing a Threat to the 2018 US Midterm Elections

Ms. Rogers provides leadership and oversight of the Department’s information and technology programs and services in support of its technology-intensive law enforcement mission. She supports the Chief Information Officer in developing the Information Technology strategy and policy for DOJ. She is responsible for managing internal operations and the successful delivery of applications, networks, and security.

US Army COL Paul G. Craft is the Director of Operations, J-3, for Joint Forces Headquarters, Department of Defense Information Network (JFHQ-DODIN). He is responsible for the operational-level command and control of DODIN Network Operations and Defensive Cyberspace Operations for all DOD networks and their functional synchronization and integration as a key subordinate organization of US Cyber Command.

Prior to becoming the J-3 for JFHQ-DODIN, COL Craft was the brigade commander for the Defense Information Systems Agency's Global Operations Command (DGOC) in Scott Air Force, Illinois. DGOC is the largest operational command within DISA and is responsible for the operations and defense of the DOD's Information Network outer boundary, mid-tier Joint Regional Security Stacks, DISA's global backbone infrastructure, DOD email security, operating and defending the DOD's Big Data Platform known as Acropolis and DOD's internet root name servers, along with the portion of the internet root structure assigned to the United States.

Principal Deputy Under Secretary, Office of Intelligence and Analysis, Department of Homeland Security

Brian Murphy is the Principal Deputy Under Secretary for the Office of Intelligence and Analysis. In that role, he advises and assists the Under Secretary and is responsible for the conduct of key intelligence activities supporting the Department of Homeland Security; State, Local, Tribal, Territorial and Private Sector partners; and the Intelligence Community, including: intelligence collection, production, dissemination, watch and warning, watch-listing and partner engagement. He also serves as the Deputy Chief Intelligence Officer for DHS.

Prior to this selection, he served as the Acting Principal Deputy for Intelligence and Analysis. Before joining DHS, Mr. Murphy was responsible for the Federal Bureau of Investigation’s national level counterterrorism programs, intelligence sharing within the intelligence community and state and local law enforcement. In this role, he developed and implemented the FBI’s counterterrorism program, including policy and budget development, training, and the buildout of several pilot field offices.

Mr. Murphy was appointed into the Senior Executive Service in 2016. He earned a Bachelor of Arts in Government from the College of William & Mary, and a Master’s degree in Islamic studies from Columbia University. He is also a veteran of the U.S. Marine Corps.

The IT-ISAC is a non-profit organization that enables companies to better manage cyber risks to their corporations and the IT infrastructure. As Executive Director, Scott’s responsibilities include the daily management of the organization, developing and implementing enhanced information sharing and analysis capabilities, facilitating cyber incident response across the IT-ISAC member companies, and establishing and maintaining effective partnerships. He is the IT-ISAC’s principal spokesperson, representing the organization to the public, senior leadership at the U.S. Department of Homeland Security (DHS), the U.S. Congress and international organizations.

Trish is the Director of Federal Sales Engineering at Anomali, a leader in threat intelligence management technology. She is responsible for designing and delivering Global Public Sector Solutions, as well as consulting on strategic commercial accounts. At Anomali, Trish has supported information sharing initiatives with DHS AIS, HITRUST, Retail ISAC and Industrial Control System ISAC. Trish has presented at several events as a subject matter export on a variety of topics, including operationalizing shared intelligence and controlled collaboration.

Trish has spent her public and private sector career dedicated to the largest and most critical institutions, guiding best practices and empowering the implementation of security products in complex architectures. Before joining Anomali, she worked in operations at Department of Energy and Defense Information Systems Agency as a Senior Subject Matter Expert in the Host Base Security System program.