The Biden administration late last year set a decades-long vision to eliminate carbon emissions from federal buildings and vehicles. But work by federal agencies to reduce energy and begin meeting that vision has already begun.

To achieve the administration’s goal of reaching net-zero greenhouse gas emissions across all federal operations by 2050 and a 65% reduction by 2030, agencies are looking at ways to make their buildings and vehicles more sustainable.

The Biden administration late last year set a decades-long vision to eliminate carbon emissions from federal buildings and vehicles. But work by federal agencies to reduce energy and begin meeting that vision has already begun.

To achieve the administration’s goal of reaching net-zero greenhouse gas emissions across all federal operations by 2050 and a 65% reduction by 2030, agencies are looking at ways to make their buildings and vehicles more sustainable.

Federal Chief Sustainability Officer Andrew Mayock said in early March that agencies must set ambitious goals in the near term to keep the administration’s longer-term goals within reach.

“While 2050 is important, what we’re doing today, what we’re doing this year and what we’re doing for this decade is what’s really critical,” Mayock said at this year’s Federal Market Workshop hosted by the National Association of Energy Service Companies (NAESCO). We have a very keen eye on the present, as we should, to turn this ship and start delivering now.”

Building a sustainability-focused workforce across government

Beyond making federal buildings and vehicles more environmentally friendly, Mayock said the administration is looking at ways to build up capacity within the federal workforce to address sustainability and climate issues.

The federal workforce, he added, must also partner with industry on energy savings performance contracting, a budget-neutral approach to make building improvements that reduce energy and water use and increase operational efficiency.

The administration sees federal sustainability investments not only as a way to reduce the government’s carbon footprint but to mitigate the harm caused by climate change.

“We’ve got a growing amount of damages, and that’s not only in dollars, but in lives,” Mayock said.

“Even though we talk about the federal government being the single biggest energy consumer in the U.S., we’re not actually one singular, monolithic customer. We’re a family of incredibly diverse agencies and operations,” Sotos said. She pointed to a range of missions, from homeland security and food security to technology innovation and labor innovation.

“The thing that [agencies] share in common is serving the American people,” she said.

They also all use energy. “That energy costs money and, unfortunately, creates a host of environmental damages,” Sotos said.” We at FEMP attempt to start with the premise that there are better ways to manage energy and its environmental impact.”

Homeland Security studies how to electrify its vehicle fleet

Teresa Pohlman, the executive director for Sustainability and Environmental Programs at the Department of Homeland Security, said DHS is looking to electrify half of its fleet by 2030.

To meet this goal, DHS is currently testing electric versions of vehicles used by law enforcement.

The department has 51,000 vehicles, about 40% of which are administrative support vehicles. The majority of the DHS fleet are vehicles used for law enforcement.

Last year, it released a Climate Action Plan outlining steps the department is taking to tackle the effects of climate change. DHS also launched a Climate Change Professionals Program in January to ensure its employees have the skillsets and knowledge to manage real and potential threats.

DHS is one of the first agencies to develop a climate resilience plan, and those plans have a critical role in continuity of operations for the department, Pohlman said

Resilience is critical to the Defense Department as well. The Air Force has two pilots, one at Joint Base Andrews and one at Joint Base McGuire-Dix Lakehurst, to study how to best electrify the service’s nontactical fleet, said Michael McGhee, the department’s executive director for climate resilience.

“As we look at electrifying the nontactical fleet, the general strategy, I will say, across the department is to begin with the infrastructure that you already have because that’s going to be your most limiting factor,” McGhee said. “If you have the vehicles, that’s one thing. But if you don’t have the infrastructure to charge those vehicles, then you’re not taking full advantage of the electrification of the fleet.”

He also touched on the part of Biden administration’s executive order on federal sustainability that directs agencies to achieve net-zero emissions across their portfolio of buildings, campuses and installations by 2045.

Defense leaders advocated for broader language in the executive order that looks at sustainability targets for installation and campuses, McGhee said.

“DoD installations tend to be small towns. In some cases, large towns, and it may make more sense to go on an installation-by-installation basis, rather than a building-by-building basis, to look at net zero,” he said. “We have land available, for example. We have some buildings that are 100-plus years old. It may not make sense to retrograde and upgrade that facility to a net-zero building.”

The White House, meanwhile, is calling on lawmakers to invest in its green-government goals.

The fiscal 2023 budget request calls for $757 million for zero-emission fleet vehicles and supporting charging or fueling infrastructure at 19 agencies to provide “an immediate, clear and stable course of demand to help accelerate American industrial capacity to produce clean vehicles and components.”

Of those funds, $300 million would go to GSA to build charging infrastructure, purchase electric vehicles and consolidate existing conventionally fueled vehicles in the GSA fleet. 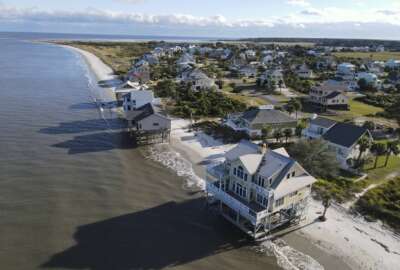 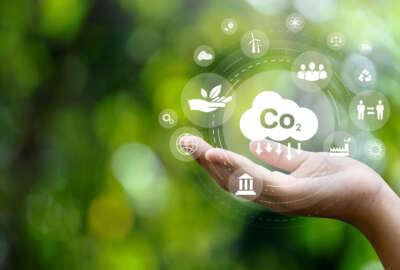