This week’s edition of On DoD is an abridged version of a panel discussion at the Navy League’s annual Sea Air Space conference, moderated by Jared Serbu. Click here for a video recording of the full panel discussion.
As part of a broader effort to add flexibility to its personnel system, the Navy wants more of its sailors to get a chance to earn advanced educational degrees. But the service argues that in too many cases,...

This week’s edition of On DoD is an abridged version of a panel discussion at the Navy League’s annual Sea Air Space conference, moderated by Jared Serbu. Click here for a video recording of the full panel discussion.

A legislative proposal the Navy is discussing with Capitol Hill for potential inclusion in the 2019 Defense authorization bill is meant to let military officers take a temporary detour from their traditional career paths, then rejoin them without facing consequences for future promotions.

It would amend the Defense Officer Personnel Management Act (DOPMA), the 1980 law that enforces up-or-out strictures to officer promotions. It would only apply to instances in which service members are still on active duty, but are spending a few years in “nontraditional” activities, like pursuing advanced studies.

Vice Adm. Robert Burke, the chief of Naval personnel, said the change would be especially helpful in fields where sailors have compressed, tightly-defined career paths, such as aviation.

“An aviator that goes off to Oxford or goes and does some sort of very high-level prestigious scholarship – if it’s anything that takes them out of the cockpit and the production flight line, they’re not going to screen for their next milestone, because they didn’t contribute to naval aviation,” he said during a panel discussion at the annual Sea Air Space conference in National Harbor, Maryland. “And there are many examples of that happening in recent years, but it’s not right for the long term. We need to be producing the next generation of highly-talented strategists to build our next version of War Plan Orange,” he said. “We should be sending our best and brightest off to those types of opportunities. So this would allow an officer to go do something off the golden path, then come back in and reset with a new peer group so that they’re not punished.”

The proposal is loosely-modeled on an existing legal authority available to all of the military services, called the Career Intermission Pilot Program (CIPP). CIPP lets service members leave the military altogether, along with most of their military salary, for a set period of time. They transition to the Inactive Ready Reserve for a few years, then re-enter active service as though they never left.

The Navy has long been an advocate of CIPP and is by far its biggest user. Burke acknowledged that relatively few sailors were interested in applying for the program in the initial years after the program’s 2009 introduction, but contended that recent upticks in participation proved it to be a major success.

Within the Navy’s force of 326,000 active duty personnel, 162 sailors are participating as of now, he said.

“We’ve had 89 people go all the way through it and come back in on active duty, 14 of whom went through subsequent officer promotion boards or enlisted promotions,” he said. “ And the vast majority — 80-some percent — were selected for promotion and went on. We’ve had husband-wife teams that that did this as department heads, each took the intermission, had two children, and each went on to become commanding officers in major commands. We’ve had every level, every rating, every rank in the Navy represented using this program, and the screening and the subsequent advancement went on and worked fine.”

In the case of CIPP, the Marines have had very few takers so far: only 11 of its servicemembers are currently enrolled.

“But we have a number of programs, and over 300 people that have gone out to places like the Naval Postgraduate School, gotten their degrees, and their promotion rates are as good if not better [than Marines pursuing traditional career paths],” Rocco said. “In the past, they haven’t been that good, because we picked the wrong people for the wrong reasons at the wrong time.”

But Rocco said the Corps has since taken a more proactive approach in counseling members as to when and if the decision to pursue alternative career pathways is a good idea for their future prospects.

“We now do a much better job now of looking at the population and going, ‘Well, this is probably not the best choice for your career to be doing this at this time,’” he said. “So when you go into the program, we will look at where you’re going, to ensure that you don’t commit professional suicide by going into a program like that. But at the end of the day, Marines are pretty smart. We can do all the advertising in the world, but if they see a road to an education program that’s not going to let them advance in their profession, they’re not going to do that.”

As part of a broader push to make the officer personnel system more flexible, the sea services are also asking Congress to adopt a measure that would grant some degree of merit-based pay to their officers.

The proposal would change the order in which boards consider promotions for officers, so that in any given year, officers “of particular merit” can be promoted ahead of their peers, instead of being constrained by the lifelong lineal numbers officers are assigned at the time they’re first commissioned into the Navy or Marines.

“Right now, we promote throughout the fiscal year based on when you are commissioned, and this would say, let’s let the board re-order you based on how you’ve been doing lately and how you’ve matured throughout your career,” Burke said. “Let’s pay the best performers today, based on your performance right now instead of how you were doing 26 years ago, whenever you got commissioned.”

The Navy made a similar proposal last year. It was adopted by the Senate in its version of the 2018 Defense authorization bill, but rejected by the House.

Over the longer term, Burke said the Navy needs to find new ways to recruit talent that is already well-versed in highly specialized, high-tech fields that it believes it will need in the future of warfare, although it does not yet have any specific legislative proposals on that front.

“What workforce are we going to need? I don’t know right now, but I know that we’re going to need different skill sets,” he said. “And I know that in the cyber world. I’m having trouble on the officer side in building those from the ground up. It would be more cost effective and more timely for me to augment traditional forces with certain skill sets either for certain missions or for certain periods of time with specialists that I can bring in from the outside. We already do that today with doctors, lawyers, chaplains. Why not do it with other certain mission specialists?”

Congress has already authorized the military services to grant officer commissions to civilians that have the cyber expertise DoD wants. But since 2009, when the Navy first obtained that authority, it has inducted only about 25 officers via the direct commissioning program.

Burke argued the low rate is at least partly due to pay. Currently, Lieutenant Junior Grade is the highest rank the Navy can offer to a new cyber officer with outside expertise.

“The mission is a draw,” he said. “People want to do this because service to the nation is important to them. We don’t have to pay dollar-for-dollar Silicon Valley salaries, but we do have to be sort of in the ballpark. So a little more time-in-grade credit, being able to laterally enter for skills like software engineering would be things we’d be seeking eventually.” 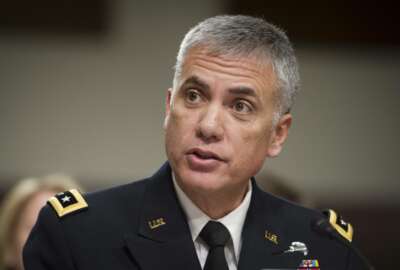