Did you miss Giving Tuesday? I’ve got news for you…

Tuesday all of my inboxes contained “giving Tuesday” messages. I’m sure yours did too. Many hands extended for many worthy organizations: charities, arts groups, religious institutions, people’s alma maters, pet rescuers. It’s tough to decide how to apportion one’s annual giving budget, whether to concentrate it on a single place and have impact, or spread the nickels around, a little to everyone.

That was Tuesday. The opportunity to give, though, never really ends.

Tuesday all of my inboxes contained “giving Tuesday” messages. I’m sure yours did too. Many hands extended for many worthy organizations: charities, arts groups, religious institutions, people’s alma maters, pet rescuers. It’s tough to decide how to apportion one’s annual giving budget, whether to concentrate it on a single place and have impact, or spread the nickels around, a little to everyone.

That was Tuesday. The opportunity to give, though, never really ends.

For example, to the Combined Federal Campaign of the National Capital Region, 8,457 federal donors have so far pledged $10 million. That’s roughly $1,200 per person. This year’s local goal is $37 million. The campaign runs to Jan. 14. Check out the possible recipients of donations. Literally thousands of vetted organizations need help.

People often like to give personal effort. But volunteering for a given organization is not always so easy to get into. Some groups are understandably picky about whom they enlist, and they have enrollment protocols. You can also give merchandise. Witness the success of those ubiquitous Toys for Tots boxes the Marine Corps distributes each year.

Still, cash can be more useful to charitable organizations than stuff. Maybe someone left a paper grocery bag on your doorstep for packaged food donations. That type of giving — as long as people donate nutritionally dense items — can help the food banks. It can also hinder them. They have to do some heavy sorting and discarding. People unfortunately leave bulging cans of sardines or bags of croutons.

Recently, I saw first-hand how money actually enables leverage. I spent an evening last month packing small boxes of groceries destined to augment for families in my county. We picked items from pallet loads of groceries. Food bank officials said that with cash donations, they can purchase large, discounted quantities from wholesalers. Plus charities have at least nominal paid staffing and have  payroll and rent obligations to meet.

The giving gestalt of the season occurs as a welcome antidote to what for some will feel like losses. Thousands of federal employees lost a class action lawsuit seeking liquidated damages for delayed paychecks in two government shutdowns. The availability of long term care insurance is about to vanish, for two years anyhow. One thing for sure, when and if it returns, it’ll cost more and pay out less.

The latest Thrift Savings Plan results reflect what everyone knows — the stock market has taken, not given, this year. Through November, the lowly G-Fund was up 2.65% so far this year; the rest of them are down for the year, with the S-Fund shrinking the most at -21.09%.

When I look at my own 401(k), I think, at least I didn’t have anything invested with that crypto knucklehead.

Congress could give. How about a solid effort to pass a full year federal agency budget? The continuing resolution expires in just two weeks. Agencies could then get on with their fiscal 2023 plans.

At least one federal agency has its hand out, in the sense that it has reiterated directly to the public why it has asked for a much larger appropriation than was enacted last year. A somewhat unusual blog post from a public affairs officer at the Social Security Administration cites customer experience. The Biden administration has asked for a $1.4 billion plus-up for 2023 to help SSA rebuild its staff and modernize its systems. You don’t see agencies very often take their budgetary case, as it were, right to the people.

The first power vacuum cleaner was so large that it was horse-drawn. 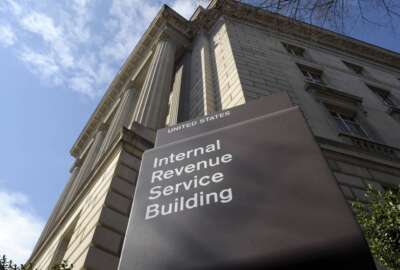 If the IRS gets bigger, so should taxpayer protections

GivingTuesday raises $3.1B for charities in tough economy