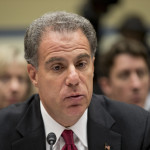 The Department of Justice’s Office of Inspector General made some serious New Year’s resolutions for the DoJ.

It released a report in November on the Top Management and Performance Challenges Facing the Department of Justice in 2017.  The report pinpointed nine challenges that are most pressing for the DoJ to handle, including:

Enhancing cybersecurity in an era of increasing threats.

The Department of Justice’s Office of Inspector General made some serious New Year’s resolutions for the DoJ.

It released a report in November on the Top Management and Performance Challenges Facing the Department of Justice in 2017.  The report pinpointed nine challenges that are most pressing for the DoJ to handle, including:

Michael Horowitz, inspector general for DoJ, told Federal Drive with Tom Temin that national security and cybersecurity are two areas that are receiving a considerable amount of attention.

With national security, Horowitz said the focus is currently on understanding what motivates homegrown violent extremists and discovering the causes of self-radicalization. The report said that between August 2015 and August 2016, 10 out of 13 attacks by HVEs were on civilian targets, compared to two out of 18 in the first seven months of 2015.

But one of the biggest concerns for the DoJ, Horowitz said, is walking the tightrope between gathering the necessary information to prevent attacks from HVEs and not violating the constitutional protections of American citizens.

Meanwhile, the cybersecurity landscape has shifted to involve both state and non-state actors, but one of the DoJ’s biggest focuses is on how to effectively screen for and prevent insider threats.

Another major issue related not only to cybersecurity but to most of these goals is that of the workforce. It’s slowly edging toward retirement, and the department is facing significant challenges in finding, hiring and retaining new talent across the board.

Horowitz also said that the prison system needed some attention: currently, high-security institutions are 31 percent over capacity, and managing these prisons is extremely costly.

“Even as the overcrowding has been reduced somewhat over the last few years — and as I said, still overcrowded — the share of the budget that the [Bureau of Prisons] and the prisons take up remains flat or even grows a little bit,” Horowitz said.

The Bureau of Prisons’ proportion of the budget has grown steadily over the last 20 years, Horowitz said, beginning in the teens and now accounting for about a quarter of DoJ’s budget.

Recent legislation could make it easier for the OIG to ensure that DoJ is working toward these goals. Horowitz called the Inspector General Empowerment Act of 2016 “critical.”

He said this won’t stop agencies from trying to stall unpopular investigations, but it will help.

“There will always be folks who are hesitant to cooperate with us, who will try and make arguments to avoid oversight, but I think it’s fair to say that this legislation is critical, because it lets all the senior leaders in every agency know that they need to make it clear to the agencies that they oversee that that kind of delay will not be tolerated,” Horowitz said. “It also sends a message from Congress to those individuals that if you do try to do that, we have an obligation to report it to Congress. And Congress will have hearings, and make clear their displeasure.”

The law also includes an exemption from the Computer Matching and Privacy Protection Act of 1988, allowing IGs to more easily match data sets with those of other agencies in order to better combat improper payments and other types of fraud.

“Allowing IGs to share information with each other in this way will allow us to use data to attack those people, for example, who are trying to get benefits improperly from two agencies or three agencies, or grants for the same work from three, four, five agencies.”