The U.S. Postal Service delivers your mail and packages. And depending on the outcome of pending negotiations, your neighborhood letter carrier could also be your local census-taker.

Testifying before the Senate Homeland Security and Government Affairs Committee last October, Commerce Secretary Wilbur Ross told lawmakers that his department was in negotiations with USPS to use letter carriers part-time, as part of a field test the Census Bureau plans to conduct in April 2018 in Providence, Rhode...

The U.S. Postal Service delivers your mail and packages. And depending on the outcome of pending negotiations, your neighborhood letter carrier could also be your local census-taker.

Testifying before the Senate Homeland Security and Government Affairs Committee last October, Commerce Secretary Wilbur Ross told lawmakers that his department was in negotiations with USPS to use letter carriers part-time, as part of a field test the Census Bureau plans to conduct in April 2018 in Providence, Rhode Island.

While the outcome of those negotiations remains an open question, the postal labor side of the equation appears generally open to the idea of taking on the added responsibility.

Jim Sauber, the chief of staff for the National Association of Letter Carriers, a union that represents more than 200,000 postal employees, told Federal News Radio that USPS workers have long supported the Census Bureau’s efforts to conduct its decennial counts.

While many questions remain unanswered, like how the Commerce Department and Census Bureau would compensate the Postal Service for its work, Sauber said he generally supports a more formal partnership with the Census Bureau.

“I think it would be a very efficient way to use the resources, because you get a really high-quality count by using letter carriers who know their communities,” he said.

The Government Accountability Office lists the 2020 census on its High-Risk List due to cost overruns and unmet deadlines for field testing new information technology systems, but the GAO has also thrown cold water on the idea of using postal employees as extra census help.

In 2011, GAO wrote that using mail carriers to conduct census field operations at USPS pay rates would not be cost-effective, adding that letter carriers get paid two-to-three times what census enumerators receive.

The Postal Service ended fiscal 2017 with a $2.7 billion net loss, and was its 11th straight year of net losses. However, USPS will soon release the financial results of its first quarter, which will reflect the success of a record-breaking holiday season for packages, which continue to see double-digit growth thanks to a booming e-commerce industry.

“Post office operations are actually doing quite well,” Mark Dimondstein, president of the American Postal Workers Union, told Federal News Radio. “It’s challenging times, it’s changing times. But we also, with the internet, have a huge increase in packages — ordering online, package sortation, package delivery and so on … I think the future can be bright, but I think some of the challenges have to be addressed by Congress.”

One pending piece of business on Capitol Hill is the latest incarnation of a postal reform bill that would, among other things, move all future postal retirees to Medicare Part B and reduce some of the burden the Postal Service has had in prefunding retiree health benefits.

The bill, which passed the House Oversight and Government Reform Committee in February 2016, has broad backing from Democratic and Republican lawmakers, and is generally supported by the postal unions and the mailing industry. However, the bill has yet to receive a full House vote since leaving committee.

“We would like to see a few tweaks, but we basically do support it. But the key to that bill is that it’s bipartisan, so in that sense, we’re optimistic that bill can pass the House and Senate. It does solve a lot of the prefunding manufactured crisis. There’s some compromises, it’s not the end-all and be-all, but it would certainly help put the Postal Service on a better path going forward,” Dimonstein said. “We’re hoping with the new year that there will be a renewed effort to get [H.R.] 756 onto the House floor.”

Also pending on Capitol Hill are the nominations of three postal governors, who if confirmed would sit on a nine-member board of governors.

However, they won’t have much of a welcome party. The Board of Governors, which serves many of the functions of a board of trustees at a private-sector company, currently has no appointed members. The last member stepped down in December 2016 after his term expired. President Donald Trump nominated the three governors in October.

The Senate Homeland Security and Government Affairs Committee addressed this issue last November, when it asked for the president’s “prioritized nomination of at least one more qualified individual” to serve on the USPS board.

Without those postal governors, USPS management cannot proceed on major decisions like increasing the price of postal products, or investing in the organization’s infrastructure.

“It’s important to have a board of directors because there’s lots of things in the law that requires board action in order to go forward,” Sauber said.

One such investment would be updating the Postal Service’s fleet of delivery vehicles. USPS is currently testing out several postal truck prototypes in select cities.

“The Postal Service has the largest enterprise fleet in the world. Frankly, the vehicles that our members use, the vast majority, are totally obsolete and well past their scheduled lifetime. And it’s costing the Postal Service and the mailing industry a lot of extra money for no reason,” Sauber said. “This is really, I think, one of the major costs of the prefunding policy. Basically, Congress made a decision that all of the Postal Service’s available money should go into prefunding retiree health [benefits] instead of maintaining their vehicle fleet and their infrastructure … It’s really important that the Postal Service be freed up to make the investments that are necessary to keep high-quality services available.”

Meanwhile, President Trump waded into the discussion of postal reform with a December tweet charging e-commerce giant Amazon with not paying its fair share to the Postal Service for delivery of its packages. Sauber said the president’s understanding of the situation was “based on misinformation.”

Why is the United States Post Office, which is losing many billions of dollars a year, while charging Amazon and others so little to deliver their packages, making Amazon richer and the Post Office dumber and poorer? Should be charging MUCH MORE!

“They earn a return on [investment] on all this work, and this has been proven over and over again,” he said. 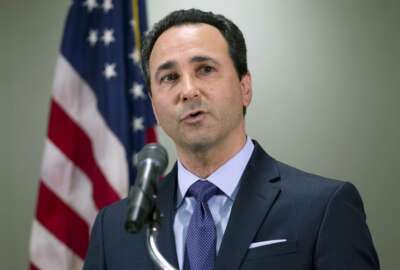