The Department of the Air Force intends to move to a future where all of its major weapons systems are designed and built via digital engineering. But for that to work, the defense industry needs to be comfortable operating in digital worlds too — and those worlds need to all speak the same language.

The Department of the Air Force intends to move to a future where all of its major weapons systems are designed and built via digital engineering. But for that to work, the defense industry needs to be comfortable operating in digital worlds too — and those worlds need to all speak the same language.

The Air Force says it’s making progress on that problem, however.

From now on, the Air Force and Space Force want all of the new systems they acquire to adopt the new digital engineering philosophy, and for existing systems, officials want to digitize as many aspects as possible.

For those new systems, the approach will mean building a “digital thread” that accounts for every aspect of a new weapons platform throughout its entire acquisition lifecycle, all the way until it reaches retirement, before the first physical copy is ever built.

In at least some cases, contracts will be awarded based on those digital models, not physical prototypes, said Will Roper, the assistant secretary of the Air Force for acquisition, logistics and technology.

“For you in industry, step one will be effectively a digital competition. Then you get put on contract, we make our government tech stack available to you, you move whatever you’ve done prior to award in, and off you go,” he said during an industry day this week. “Depending on the nature of the program, we may take you up to something short of a full system design, or we may take you all the way where you design a fully-integrated digital system.”

But for that model to work, contractors will need to build digital worlds that are compatible with the Air Force’s digital environment while they’re still designing the systems they plan to submit for bid. And Roper said delivering vendors a how-to guide for doing so is a top priority.

“We owe you, pronto, our government reference architecture. We’ve just started, so we’re going to have to leap far ahead of our needs and provide industry the reference architecture we will be using for our tech stack so that it is easier for you to jump from internal developments into a program of record, “he said. “I think it’s much better to give you the ability to skate ahead of the puck.”

Much of that work is ongoing within a program called Weapon One, which has been working for the past nine months to build an open, digital ecosystem for the Air Force’s weapons programs, including by combining model-based systems engineering with some of the modeling and simulation capabilities the Air Force already has.

Craig Ewing, the modeling and simulation lead for the Air Force Research Laboratory at Eglin Air Force Base, said Weapon One plans to release a draft version of its reference architecture for munitions by November, with its first official release in January.

But Roper says the good news is this is a case where the Air Force actually isn’t lagging behind industry. He said there are only a handful of examples where commercial manufacturers have adopted digital engineering in the comprehensive way the Air Force wants to, and they’re all outside the aviation and defense industries — mostly in the automotive manufacturing space.

“But we can’t jerk you around: we have to have the technical acumen on our team to be able to tell you how to build your stack, so that when it’s time for you to be on contract, it’s seamless and one-to-one with ours,” he said. “And then once you’re on ours, all of that government automation that we’ve been working on comes to you as free-of-charge government-furnished property that directly reduces your integration risk.”

The Air Force also wants to build on some of the successes it’s seen in the software world with its Cloud One and Platform One software development environment. There too, Roper said, the government has seen huge benefits by incorporating a high degree of automation into the development process.

“It’s a government-owned, fully-container native Kubernetes software development platform, it has an authority to operate that is continuous and baked into the stack. And when we share it with industry, industry gets that authority to operate as well,” he said. “And maybe that’s not reason enough to think that we ought to be doing programs in the future with a government-furnished tech stack. But once you see what’s possible with having security embedded in the tech stack itself — happening automatically in the background — it opens up your eyes and your aperture. What is already common in commercial industry can be common for us: Trying to automate nearly everything we do.” 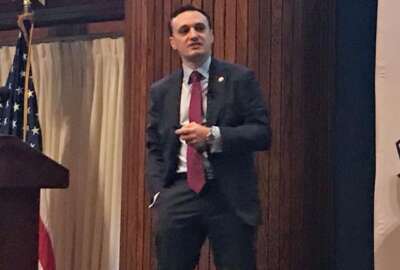