Lynne Parker, the assistant director for artificial intelligence at the White House’s Office of Science and Technology Policy, speaking Thursday at the National Academy for Public Administration, said her office expects to release an updated National AI R&D Strategic Plan later this spring.

The update, she said, will reflect comments the White House received from a request for information the National Science Foundation issued last fall, and will replace OSTP’s previous AI research plan released under the Obama administration in October 2016.

In addition, the Office of Management and Budget and Office of Information and Regulatory Affairs are both working on guidance, due for public comment this summer, focused on what Parker described as “consistency across agencies in how they think about AI governance.”

While the guidance will give agencies a better sense of best practices around AI, Parker said the administration is also looking to avoid a one-size-fits-all approach.

“All AI is not the same, and so we don’t want to have a big overarching umbrella that says we treat all AI the same. There are many people who call for AI to be explainable, for instance, but maybe not every use of AI has to be as transparent as every other use,” Parker said, noting that applications for AI vary from making a diagnosis from an X-ray, to controlling drones, to deciding who qualifies for a loan.

However, that lack of AI transparency concerns Priscilla Regan, a professor at the Schar School of Policy and Government at George Mason University and a NAPA fellow, adding that AI will reshape how federal managers make certain decisions, including who receives certain benefits, who gets considered for jobs and who gets promotions.

“You lose a certain amount of control over understanding and being able to be accountable for the processes, the decisions that you are making as an administrator,” Regan said. “All of those kinds of decisions, that are being facilitated in many agencies already by AI systems, are going to be a little harder for you to you to understand, unless you’re really kind of staying on top of it.”

Karen Shrum, a principal in government and public sector at Ernst & Young, said the evolution of AI in the federal workforce will not just require reskilling, but continuous learning throughout an employee’s career.

“AI and introducing it to the workforce is not a one-and-done, it’s something that is ongoing … we’re always going to be tweaking the bot, or tweaking the process, or tweaking how we react to that,” Shrum said.

The administration has begun some efforts to prepare federal employees for the jobs of the future.

The Federal Cyber Reskilling Academy, launched by the Office the Federal Chief Information Officer, Education Department and the CIO Council, opened its doors to its first class of fellows on April 15. The first class consists of 30 non-IT federal employees who upon graduation will fill new cyber-focused positions.

Beyond that, Parker said agencies are “stepping up on their own” to create reskilling opportunities that include enrolling federal employees in short-term courses and workshops to gain cybersecurity and AI-related skills.

In addition, an Office of Management and Budget official told Federal News Network that the Office of Personnel Management would release a reskilling toolkit for agencies later this spring.

According to a Performance.gov update in December on the President’s Management Agenda, OMB and OPM, in addition to the toolkit, are working on a “reshaping playbook” and “video vignettes featuring agency successful practices” for future reskilling efforts.

Despite federal workplace anxiety around AI, Shrum said the technology will help employees do their jobs more effectively, and likened workplace culture change with AI to the chaos around bring your own device during the rise of smartphones

“I have no doubt that AI is going to be as challenging as some of these other technological advancements that we’ve brought into the workforce, but I also believe that over time, it will become part and parcel of the way we do things, provided that we as leaders and managers are able to help our workforce to adjust and adapt to these.”

“We now have a very strong industry base that is investing significantly in R&D, but the federal government still has a very critical role in its investments,” Parker said. “And so we want to prioritize the important investments there. Regardless of how much we spend on R&D, we want to make sure that those investments are used wisely and in the areas that are most impactful.”

The president’s FY 20-20 budget request looks to cut overall federal R&D spending, but it also calls for about $850 million to support the American AI Initiative launched under the president’s executive order.

“The expenditures AI in particular have not been cut, even though overall R&D budgets proposed in the president’s budget has been cut.” 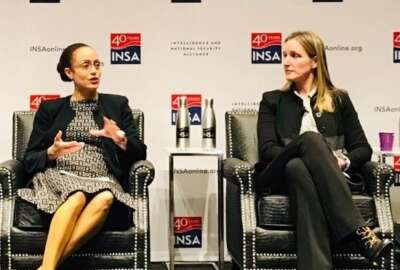