Two Pentagon components, the Defense Innovation Unit and the Defense Threat Reduction Agency, have teamed up with one another, along with Phillips Corporation, on an artificial intelligence project. It aims to establish an early warning system for infectious diseases. To learn more about the Rapid Analysis of Threat Exposure, or the RATE project, Federal Drive with Tom...

Two Pentagon components, the Defense Innovation Unit and the Defense Threat Reduction Agency, have teamed up with one another, along with Phillips Corporation, on an artificial intelligence project. It aims to establish an early warning system for infectious diseases. To learn more about the Rapid Analysis of Threat Exposure, or the RATE project, Federal Drive with Tom Temin spoke with the Chief of the Digital Battlespace Management Division at the Defense Threat Reduction Agency, Dr. John Hannan.

Tom Temin: This project actually predated the current pandemic, sounds like you had perfect timing.

Dr. John Hannan: Yeah, it did. We were actually starting this project back in March of 2018, believe it or not, and that was in conjunction with the Defense Innovation Unit and Philips Healthcare. So initially, this was going after a non invasive technology that could improve force readiness by providing indications, early indications of any type of exposure to an illness.

Tom Temin: And tell us what each piece brings to this, the DIU, your agency and Philips Health.

Dr. John Hannan: DTRA is the project lead and we bring the infectious disease experts and and other folks here to help shepherd the project along. DIU has helped us not only with the project execution, but also putting us in touch with some of our non-traditional partners in DoD and Philips falls into that category. So in the past, getting to a company like Philips would be likely impossible for the DoD, it just wouldn’t be a marriage that you would normally see happen with that commercial space, but DIU through their extensive network was able to link us up with Philips Healthcare and bring them into the equation.

Tom Temin: And is this a grant effort? Or is it an OTA, other transaction authority type of arrangement.

Dr. John Hannan: So it was originally started as an OTA. And that was, again, through DIU and Philips. We’ve followed on now with some of the extensive efforts going on to get at the COVID issue with a follow on contract. So that’s a separate contract through DTRA.

Tom Temin: So you’ve done a little bit of pivot, because since the project was underway, an actual pandemic came along.

Dr. John Hannan: Yeah, that’s correct. As the pandemic arose, and in the March timeframe, we were fairly well positioned already having gone through two years of research and development to bring this into the COVID space and see whether or not we can help address some of the problems that were happening back in March.

Tom Temin: And let’s talk about the project itself. What is it that you envision, is the result of this, the rate system? How would it work and what would the artificial intelligence piece of it be?

Dr. John Hannan: Yeah, so the way we envisioned this project, it’s basically a screening technology. And we like to talk about it in an analogy using the check engine light in your car, it’s meant to tell you that something is wrong and the physical system in a human being — but it’s not specific as to what is going wrong. But it basically alerts you to be able to in advance, get to a clinic and get checked out through traditional diagnostic tests. And the idea here is if you can get testing on the order of what we’ve shown is about 48 hours prior to becoming symptomatic, that allows you to put a lot of other measures in place and whether it’s isolation or therapeutics or something else that would allow you to get ahead of the infection and not have people spreading that.

Tom Temin: What is the mechanism under which the rate system or authorities would be alerted to an individual being exposed to something and would therefore need testing?

Dr. John Hannan: Right. So we’re working that through the military channels right now, and we have an operational user assessment. So we have a number of cohorts in the military that are working through those types of questions in terms of at what level would the commanders have that kind of information and make the decision? And what is the appropriate level to do that? So that’s something that we’re with the, again, the operational user assessment going on right now that we’re aiming to get out, at least from the military perspective.

Tom Temin: What I was asking was, would it be from a smartphone? Would it be from some kind of a contact tracing technology? At the ground level how do you find out, hey, that soldier, that airman should be tested?

Dr. John Hannan: The technologies that we’re using right now are commercial off the shelf technologies such as the Garmin Phoenix 6, and also a device called the Oura Ring. So it’s a just like a wedding band, if you will, that sits on your finger and has a number of sensors inside the band that can detect things like heart rate, variability, and temperature. So the combination of these two data streams that come off the watch and come off the ring basically flow through applications up to a cloud based service that Philips has, and this is where the rate algorithm resides. So those data streams flow from the devices up through that cloud architecture. And then the algorithm is operated by the pillar of cloud.

Tom Temin: So in other words, it’s sort of a Internet of Things technology basis.

Dr. John Hannan: Yes, it is. I think a lot of people these days are familiar with fitness trackers. If you own something like a Fitbit or a Garmin.

Tom Temin: I’ve got a Garmin on my wrist right now.

Dr. John Hannan: Right. So when you’re tracking that information, all of the commercial developers have an application that you can download to your smartphone. And the information is basically transferred from your device via bluetooth over to your phone and then up to a cloud that’s hosted by that commercial entity. And from that you can look at a lot of things that are related to the analytics and performance over time, and sleep patterns over time and all of that. So very similar to that with the extra step of basically pulling that up to the the rate algorithm to operate.

Tom Temin: And do you envision this being deployed for troops across the military, or pretty much everyone within the defense enterprise?

Dr. John Hannan: Yeah, so we’re starting with the troops, and that’s the natural place for us to start. And if it shows promise, as we move through time and collect additional data and look at how the algorithm is performing — then our plan would be to transition this capability to a larger program of record and the military that would essentially handle the fielding to all of the troops. But there’s no reason it couldn’t expand further than this. And there’s also with Philips involved, there’s obviously a commercialization perspective that they are going to get after from their side. So it could be something that is both DoD and a public venture at some point?

Dr. John Hannan: So what we’re doing with the military right now is making sure that everything is coordinated through research oversight, number one, but that HIPAA considerations are taken into account data that comes across from all the individuals is de-identified. We’re also concerned and making sure that there is no GPS data, which is I think we saw in the in the news several years back, there were some information that was out there via commercial applications like Strava that maybe should not have been out. So we’re going to great lengths to make sure that number one, the privacy issues are taken into account, and also security issues for the DoD.

Tom Temin: What is the deliverables from Philips and what is the timeline when you think you might have something to test and try out?

Dr. John Hannan: So the deliverables from Philips is the rate algorithm itself. And we do have the algorithm already in hand, this is the result of the first two years of work. The first two years of work to be clear, were done in a hospital environment. So the algorithm was trained on hospital patients that acquired an infection as they move through the hospital care system. What we’re doing right now with the operational demonstration is seeing how this translates into a field environment with our military members. So if this over the next few months as we collect the data from the individual service members, and it shows promise, again, we are hoping to have this moving through Philips commercialization within about a year timeframe.

Tom Temin: Just out of curiosity, as a matter of course, are inductees that join the military, does everybody get some kind of a fitness tracker anyway?

Dr. John Hannan: That’s not the standard protocol right now. As you can see, if this were to pan out and to work well and show promise within the military population, that would be certainly a consideration. As these technologies evolve, and do so quickly. There’s going to have to be an adjustment on the military side to determine how this might promote health care or monitoring in the future. 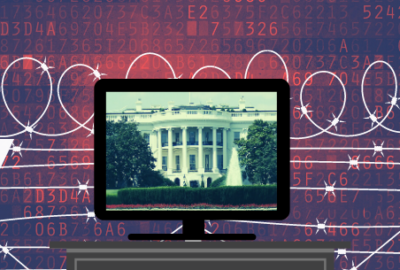 Move over COVID, IC says influence operations will be next big disrupter