The Army sees artificial intelligence as the foundation that will allow its leadership to use real-time data to make decisions on the battlefield. But first, it’s using AI to look inward and assess its service members.

Ltc. Kristin Saling, the chief analytics officer for the Army Talent Management Task Force, said the Army is using machine learning to build a retention prediction model, which determines the likelihood of personnel staying in the service.

The Army sees artificial intelligence as the foundation that will allow its leadership to use real-time data to make decisions on the battlefield. But first, it’s using AI to look inward and assess its service members.

Ltc. Kristin Saling, the chief analytics officer for the Army Talent Management Task Force, said the Army is using machine learning to build a retention prediction model, which determines the likelihood of personnel staying in the service.

The Defense Department outspends civilian agencies in AI research, and rapidly fields the products of that research. The Joint AI Center has led these efforts across DoD, but the Army’s AI Task Force is taking steps to make AI education available to all Army soldiers and civilian employees.

Despite these research investments, Saling said the Army is “all over the map” in terms of AI deployment, and is looking for ways to move cutting-edge technology out of its labs and into operational headquarters throughout the Army.

On one end of the spectrum, the Army has fielded sensors and wearable technologies for service members on the battlefield, but other areas have not yet caught up to speed.

“We have organizations that are still kind of working at the acetate-over-maps level in their command centers, who really want to be able to innovate into this space, but aren’t quite sure where to start,” Saling said Thursday during a virtual panel hosted by the  Advanced Technology Academic Research Center.

The Army is looking to stand up fully AI-ready divisions within its ranks, but with an enterprise of more than a million people, Saling said the future of AI in the Army won’t be “one-size fits all.” Instead, the future of the Army means a greater level of data fluency throughout the entirety of the service.

“We’re trying to break ourselves out of our usual kind of bureaucratic, scripted, here’s-the-doctrinal answer and figure out what is a more flexible framework for innovation and the provision of resources look like for us,” she said.

Building AI competencies in the Army, she added, also requires leaders who value these skills in the context of career progression and promotion opportunities.

“We need leaders who can speak data and who can communicate their decisions that they need to automate, we need people working in between or people working, running the product teams, data teams who understand the way that the Army thinks and how to integrate these systems, and I think we are moving in that direction,” Saling said.

Meanwhile, the Department of Veterans Affairs, through its National Artificial Intelligence Institute, is using AI to determine how best to treat its patients.

Christos Makridis, a senior adviser for NAII, said the institute has developed a mortality risk score for patients based on multiple streams of data, and breaks down these metrics for care providers.

“That allows the clinician, instead of just having a single score, they can see what are the inputs to that and then make adjustments appropriately,” Makridis said.

The NAII has also stood up a COVID-19 dashboard with the Washington, D.C. VA and is working with its researchers in the private sector to pull data from wearable technology to get a better picture of a veteran’s health.

“There is a little bit more caution in applying this, particularly when you’re working with [personally identifiable information] so there is I think warrant behind some of the caution,” Makridis said. “You don’t want to move too fast, but you don’t want to move too slow. Where the NAII is really trying to find that sweet spot is by bringing private-sector individuals into the fold through the sort of research that we pioneer.”

While agencies have ramped up work in artificial intelligence in recent years, the National Oceanic and Atmospheric Administration have worked with this technology for more than 25 years.

Jamese Sims, a senior AI adviser at NOAA, said the agency is looking to stand up a center for artificial intelligence that will accelerate the technology across the agency and improve the accuracy of its weather forecasts.

“We are in a historical hurricane season, and we’re really seeing how our models and prediction tools have advanced and allowed us to provide the accurate forecasts that are needed for people to take action,” Sims said.

Given NOAA’s long history with AI, Sims said the agency recently identified that about 190 projects across the enterprise is powered by this technology. NOAA Fisheries, for example, has been using AI to analyze data from fishery surveys and reduced its compute cost by 98% for data processing.

As for next steps, NOAA is partnering with Google to explore the benefits of using artificial intelligence and machine learning to enhance the agency’s use of satellite and environmental data.

NOAA signed a three-year Other Transactional Agreement, a vehicle that allows the agency to quickly award small research and prototyping contracts without a lengthy competitive bidding process. The agreement includes NOAA and Google working together to provide AI training to the agency’s workforce. 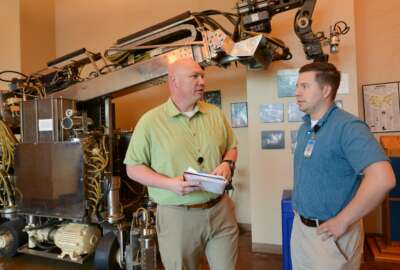 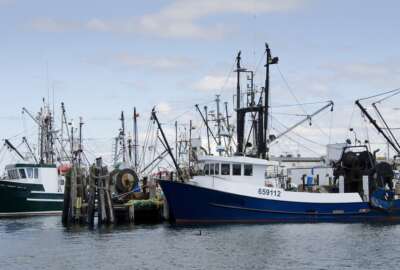