They teach military members’ kids. Now they’d like a contract.

The Department of Defense Education Activity or DoDEA, employs 570 teachers for the children of service members stationed in Italy, Spain, Turkey and Bahrain, the teachers, part of a bargaining unit called the Overseas Federation of Teachers, say it hasn’t had a new contract in 28 years. Here with what they’d like to have happen, the union...

The Department of Defense Education Activity or DoDEA, employs 570 teachers for the children of service members stationed in Italy, Spain, Turkey and Bahrain, the teachers, part of a bargaining unit called the Overseas Federation of Teachers, say it hasn’t had a new contract in 28 years. Here with what they’d like to have happen, the union president Linda Hogan talked to the Federal Drive with Tom Temin.

Tom Temin: You are in Washington, DC now for the purposes of trying to establish something with the D. D, Tell us what’s going on here.

Linda Hogan: I’m here in Washington, DC, we were just recently in Vicenza, Italy. And we are attempting to negotiate a new contract with Department of Defense. And that’s why I’m here for that reason.

Tom Temin: And you’ve been operating without a contract. Since when?

Tom Temin: Well, did you just wake up 28 years later and say, gosh, we probably should get a new contract or has this back and forth been going on for some time?

Linda Hogan: We’ve been negotiating this contract for over a year. But we didn’t just wake up and all sudden.  Things changed over the last few years starting during the Trump administration. And I’m sure you’re aware of there were  many civilians working under Trump that did not support union. And and it hasn’t been the same collaborative, respectful relationship since that time. But it was during that time when  they requested that we open our contract and negotiate a new one.

Tom Temin: All right, so some good and bad news, I guess, in that particular era, and who do you specifically negotiate with?

Tom Temin: All right. And just getting back to who’s covered here? Italy, Spain, Turkey, in Bahrain. What about all the other countries DODEA operates in?

Linda Hogan: Those are under another union. And we’re only dealing with, I only deal with about of 570 educators I have in my district. Which is those four countries.

Tom Temin: And by the way, where are you stationed yourself?

Linda Hogan: I live in Turkey.

Tom Temin: Well, what’s it like, by the way, we’ll get back to the bargaining. But what’s it like teaching American kids in Turkey?

Linda Hogan: You know, it’s actually like their children anywhere you go. And it’s just like teaching anywhere in the United States. These are American children who want the best from their teachers and, you know, want to grow and learn. And actually, I don’t find it any different. It’s very different living in a foreign country. That part is very different. But the children are the same. They’re children.

Tom Temin: Yes, indeed. And let’s get back to the contract. Now, I presume that pay and related benefits have gone up as they have for all federal employees over the years. So what is it specifically that’s an issue in this contract negotiation?

Linda Hogan: We are not negotiating pay, but we are negotiating some very important issues to teachers. One is the preparation time they need. The other one is lunchtime. But you know, most importantly, when we first started this contract, we asked the teachers we reached out to them and saying what is most important to you? What would you like us to get as we have to negotiate this new contract? And the number one thing that asked for Tom was respect and trust, that they are doing everything they can for the students that they work with every single day. And they don’t feel like they have the respect that they deserve.

Tom Temin: Well, how do you get that into a contract clause respect, and that sort of thing?

Linda Hogan: Well, actually, we have we are working on that it’s in our preamble, we actually added a section in our preamble, we actually got it in that talks about respect for teachers. But you know, just getting it in the contract does not mean teachers get the respect they deserve. And that’s going to show up in other ways. And what we’re fighting for this time right now for these next two weeks is preparation time and a lunchtime that these teachers need to continue doing the work that they’ve been doing all along.

Linda Hogan: Preparation time is a time when teachers have to prepare for their lessons for the day. It’s a critical time, it’s when they plan, it’s when they grade papers is when they work on everything they need to do to individualize instruction for the students they are serving. Our military connected families arrive overseas from everywhere in the US. And they only remain with us for two to four years. And in fact in Ankara it’s two years. But teachers work with all the students from wherever they are educationally and move them forward, which is something that doesn’t happen in the state side schools. We know the parents are very concerned about and we know that about the possibility of losing that prep time because they’re aware that the teachers use this time to move their child Johnny forward wherever they’re at,  educationally and move them forward to be the best that they can be. So this prep time is critical for our teachers.

Tom Temin: So in other words, there’s a take back maybe gambit happening from the DoDEA side.

Linda Hogan: Absolutely, Tom. Yes. There’s there’s a huge take back with with prep time, with lunchtime, with several things like that, that, to us, really show respect for our teachers.

Tom Temin: Yeah, let’s talk about lunchtime for a minute. What time do you feel you need in a day? And what are they offering?

Linda Hogan: Well, right now they’re offering an unpaid lunch time. In other words, they would increase our day, by the 30 minutes they want to give us for lunch, which is not what we have presently. And you know, for the majority of our teachers, this lunchtime is probably I can tell you speaking from as a teacher, myself, this lunchtime is most likely for as many teachers the only time they can use the restroom during the day. We’re not like civilian workers, we have a 15 minute prep, or a 15 minute break that we can go use the restroom. It doesn’t work that way when you’re teaching children. And this is lunchtime. Thirty minutes is most likely the only time they can use the restroom and scarf down a few bites of food for their lunch before they have to go back and get their students again. And they they don’t want to give us this paid lunchtime within our within our duty day.

Tom Temin: Wow. So I guess the reason that they wanted to reopen the contract is becoming increasingly clear. I’m trying to understand how they would benefit by extending that day with unpaid, I’m just imagining what they’re trying to drive at.

Linda Hogan: I would agree with you. In fact, one of the things I want to say for our teachers is DoDEA has one of the best test scores in the nation. And and they know it. Currently, right now they brag about it, you you’ll read it in the news, that they have these high test scores. And we want to continue that. Reading scores of the DoDEA fourth graders and eighth graders, I can tell you overall, are higher than any other state in the nation. Higher. And why would we want to change what has been working so well. In fact, during COVID, when our teachers work so hard to continue lessons to teach when other schools were closed down to service their students even virtually, we found they found with test scores, that our students did not lose the progress that they lost in other schools in the States. And so then my question to you is, yeah, why would they want to change this? Why would they want to take what’s been working so well, all these years? I don’t know.

Tom Temin: And you’re in Washington once again. How long do you expect these negotiations to take?

Linda Hogan: Well, we’ve been we’ve been negotiating this contract for over a year now. We’re here for two weeks. I will tell you this is important. Until the last two, the last round, which was in Vicenza. We were not doing very well at all. But what happened was, and this is we think about it how bad the situation had to be. How tense it was between the union DoDEA has been so fraught over the last several months that 11 members of the House and Senate Armed Services Committee sent a letter last month to DoDEA director Tom Brady, urging him to bargain in good faith and advanced proposals that both parties  can negotiate. That letter, I have to tell you that letter made an impact. I think, on negotiations and on Tom Brady, because things have picked up in the last round. And we’re getting articles completed and tentatively agreed to that we were not getting before. But why would it take a letter from the armed forces committee to get what we should be getting anyhow?

Tom Temin: Well, maybe because they control the budget?

Linda Hogan: Well, that’s probably true. And whatever the reason is, I will tell you, I’m very grateful that that happened. Because until that letter went out,  I was actually very unsure what was gonna happen with our contract because we were not getting anywhere.

Linda Hogan: Thank you so much, Tom. 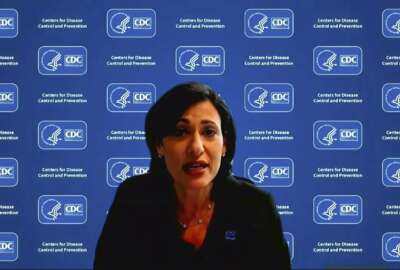