In December 2011, Sen. Claire McCaskill (D-Mo.) received a flyer in the mail offering a free cellphone as part of the Federal Communications Commission’s Lifeline program. After six years, numerous Senate hearings and Government Accountability Office investigations, she’s still not convinced the agency is doing enough to combat waste, fraud and abuse in the program.

But FCC Chairman Ajit Pai has been trying to draw attention to these issues for years as an FCC commissioner, and was eager to show how he’s worked with the Universal Service Administrative Company, the company that administers the program. At a Sept. 14 hearing of the Senate Homeland Security and Government Affairs Committee, Pai and acting CEO of USAC Vickie Robinson tried to assuage senators’ concerns by detailing some of the measures they’ve already taken, and those they will be taking in the near future.

Central to those concerns was a July 2017 report from the Government Accountability Office that said companies working with the Lifeline program may have a financial incentive to abuse the program, since agents are paid based on the number of new subscribers signed up. Because of these incentives, and lax controls on the parts of the FCC and USAC, GAO found more than 6,000 deceased recipients and more than 5,500 receiving duplicative benefits.

GAO was also unable to confirm the eligibility of about 36 percent of participants. Individuals who currently receive other forms of government assistance, like Medicaid or the Supplemental Nutrition Assistance Program (often called “food stamps”), automatically qualify for Lifeline. But GAO could not confirm these qualifying benefits for 3.5 million Lifeline recipients.

And loopholes in Lifeline’s one-per-household rule have resulted in cases where a large number of subscribers — as many as 10,000 — were enrolled at one address.

“Due to its scope and scale, Lifeline is inherently open to fraud,” Seto Bagdoyan, director of Audit Services, Forensic Audits and Investigative Service at GAO, said during the hearing.

And lawmakers were quick to focus on the idea that it is participating companies taking advantage of the situation, not the individual recipients.

Pai admitted that these issues had been plaguing both the FCC and USAC for quite some time.

“It is an unfortunate feature of human nature that if there is not a cop on the beat, people tend to play a little faster and looser with the rules, and unfortunately, that has manifested itself here,” he said.

But he and Robinson laid out in detail the moves their organizations have been making to clean up the program.

In 2014, FCC and USAC launched the National Lifeline Accountability Database, which keeps track of all the customers currently enrolled in the Lifeline program.

“Upon initial launch in 2014, the NLAD detected over 2.5 million duplicate subscribers that have since been eliminated,” Robinson said in her testimony. “This led to hundreds of millions of dollars in savings. Lifeline disbursements dropped from $2.2 billion in 2012 to $1.5 billion in 2015 following implementation of the NLAD.”

She said the FCC and USAC are now working to stand up a national verification program to complement the NLAD.

“We’re projecting to have our soft launch of the national verifier in December of this year. … We also have secured an agreement with HUD to have federal matching of eligibility using federal housing information. And we’re targeting our hard launch in March of 2018,” Robinson said.

The National Verifier would check state and federal databases to ensure that applicants to the program are eligible to receive the benefits.

“It is always better, I think, to have upfront verification, as opposed to after-the-fact enforcement. The pay-and-chase model … is never going to be efficient,” Pai said.

Pai said that in 2015, the FCC and USAC also began requiring plan providers to retain all documents pertaining to eligibility verification. With this information, FCC and USAC have begun reviewing addresses with more than 25 subscribers, ensuring that companies only claim subsidies for the total number of subscribers, and are reviewing the lists to eliminate deceased and duplicate subscribers.

They also intend to release a final plan in January 2018 to require sales agents to register, so that FCC and USAC can begin holding them individually accountable.

But lawmakers were still disturbed by the lack of prosecutions and recouped losses.

Robinson, who previously worked in the enforcement bureau at the FCC, told the committee that the FCC is restricted by statutory maximums regarding the structure of enforcement.

Pai said that the FCC begins by sending out notices of apparent liability, which tells companies that FCC believes they owe money. After an investigation, it can follow up with forfeiture orders, which require the company to pay back the money it owes.

But McCaskill noted that payments have continued to some companies to which the FCC has sent notices of liability.

“I’ve got $90 million that has been identified [in the notices of liability] from 10 carriers. Now keep in mind, those same 10 carriers, you wrote checks totaling $2.4 billion in the last two fiscal years. How in the world are we writing these people checks when they owe us $90 million? How is that happening?” she asked.

Pai said he couldn’t speak to current investigations, but that the FCC is currently pursuing a number of violations, and that he would update the committee at a later date.

But some lawmakers remained skeptical. 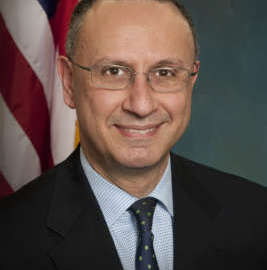 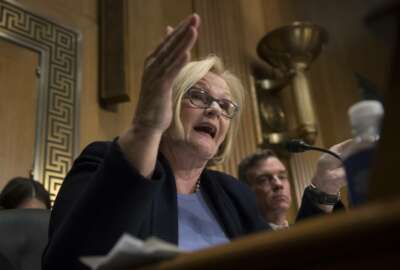