Small businesses have a big stake in the federal marketplace, and the Small Business Administration sets a high bar for the rest of the federal government to do business with them.

This marks only the second year that agencies met or exceeded the women-owned small business contracting goal since SBA set that benchmark, although agencies have fallen just shy of the governmentwide goal in recent years.

Eight agencies earned an ‘A+’ on the scorecard and 14 agencies received an ‘A.’ Agencies that showed the most improvement include the Office of Personnel Management and the Department of Veterans Affairs — which both went from a ‘B’ to an ‘A.’

“There’s been a lot of consistency and a lot of improvement in what the agencies have done, it was just a banner year. I’ve seen this from the other side, and as a chief procurement officer or as a director of acquisition, if I was looking at my agency making increases like this, I would be extremely proud of what we’ve done for small business,” Spampinato said Wednesday in an interview.

Instead of hitting the 3% benchmark for prime contracts, 2.28% of federal contracts went to certified HUBZone firms, but Spampinato that’s still the highest level of HUBZone spending in seven years, and that contracting spending injected $11 billion into economically disadvantaged regions.

To make sure that HUBZone contracting continues to head in the right direction, Spampinato has reached out to the Offices of Small & Disadvantaged Business Utilization at the 24 largest agencies to see what’s been working.

“I’ve been doing a lot of outreach, talking to the OSDBUs and say, ‘Look, you’re doing really good on HUBZone. What’s your HUBZone secret?’ And I’ve come to find out that a lot of times the secret is focus,” he said.

The Nuclear Regulatory Commission saw the biggest improvement in HUBZone contracting, going from 3.4% of prime contracts in 2018 to 13.31% in 2019.

Beyond just meeting the SBA goals, Spampinato said small businesses have a lot to offer the federal marketplace.

Meanwhile, 33% of the $270 billion spent on subcontracting last year went to small businesses, which SBA says created more than a million jobs. Spampinato said that’s one area where agencies should continue to expand.

“We were trying to get everybody’s attention 15 years ago at Energy in the sub-contracting arena,” he said. “We have to understand that small businesses are a viable and a critical part of the national economy, the employment picture, and we’ve got to learn to understand what they do and how they do it and how they can help us meet our mission requirements.” 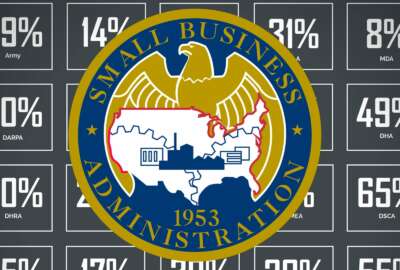