It’s paid false claims fines. It’s been investigated by the Justice Department. Members of Congress have expressed outrage over it. It appears to be a large enterprise. And yet this year Atlantic Diving Supply received a slot on a $33 billion, 10-year deal from the Defense Logistics Agency, for which only small businesses were supposed to qualify....

It’s paid false claims fines. It’s been investigated by the Justice Department. Members of Congress have expressed outrage over it. It appears to be a large enterprise. And yet this year Atlantic Diving Supply received a slot on a $33 billion, 10-year deal from the Defense Logistics Agency, for which only small businesses were supposed to qualify. Federal Drive with Tom Temin will hear what the ADS says about this. But first, from the Project on Government Oversight, senior investigator Nick Schwellenbach.

Tom Temin: Nick, good to have you back.

Nick Schwellenbach: Hey, great to be on.

Tom Temin: So this has been an ongoing saga for a number of years, Atlantic Diving Supply. This is not the first report you’ve done on it. Give us the overall picture here of what’s going on.

Nick Schwellenbach: Well, I’ll give you a little bit of background about how I learned about this company. So I, like a lot of other people, were looking at the Paycheck Protection Program last year and some of the recipients that got some of the larger loans. And this company emerged as one of the biggest, at least in terms of annual revenue, privately held companies that got a PPP loan. Atlantic Diving Supply got $5 million last year from the Small Business Administration to help keep its workforce paid as the pandemic ravaged the economy. And those loans were supposed to go to businesses that had reasonable uncertainty in terms of their financial status because of the pandemic. Yet, Atlantic Diving Supply had a record breaking year in terms of its federal contract revenue, making over $3 billion. So we looked at the company more deeply and did an initial story on some of their settlements with the Justice Department in 2017 and 2019. In 2017, the company settled for $16 million with DOJ to settle a whistleblower lawsuit that claimed that it really wasn’t a small business and that it actually secretly controlled the network of other companies, or in order to keep its sort of total workforce officially under the 500 employee cap. ADS never admitted wrongdoing, there was no finding of fault, yet it paid $16 million. And then two years later, ADS’s majority owner, its former CEO, and its current chairman of the board, Luke Hillier, paid another $20 million to settle the same lawsuit. Yet less than one year later, it was winning a $5 million loan from the SBA. So that initial story led a number of people to come out of the woodwork. And you know I can identify that many of them are people who work in this industry, some of whom are former ADS employees, who had a number of stories to tell about the company and concerns to share. And we also filed a number of Freedom of Information Act requests with the federal government regarding investigations involving this company. And we did a part two in February of this year. It’s a pretty long story detailing a lot of the findings over the years involving ADS. Turns out the Pentagon back in 2005 initially learned that ADS was secretly controlling one of these front companies or shell companies that would later settle more than a decade later with the Justice Department. So it’s a long running saga, it raises profound questions about the government set aside programs for small businesses and whether or not they’re really working for small businesses. And whether or not actually large companies are gaming the system to benefit at the expense of legitimately small companies.

Tom Temin: And what has SBA, or the DLA that awarded this most recent contract, have they said anything about this?

Nick Schwellenbach: So the Defense Logistics Agency did provide us some comments for our second story. They generally said that their agency was doing what it could to ensure that ADS was complying with the law, they sort of kicked the can over to the Small Business Administration, at least officially, that’s what they told us. The story we’ve heard from the SBA is a little bit more complicated. The SBA has been frustrated, because they haven’t received all the information they believe exists on this company that the Justice Department has, that DLA has. So the SBA has been a bit frustrated here. The SBA tried to take away ADS’s small business status back in 2019. They briefly succeeded for about a month or two. ADS appealed. That’s what’s called a size determination in EDS, one on appeal, EDS based their appeal partly on the fact that the SBA was using what ADS deemed dated information that came out of the whistleblower lawsuit. So the whole saga raises questions about how do you hold companies accountable when they engage in wrongdoing or allegedly engaged in wrongdoing, they can always settle and then claim that the settlement isn’t a basis for barring them or suspending them and that the information that led to the settlement is old. So what’s presently responsible if you’re looking at it from debarment perspective.

Tom Temin: We’re speaking with Nick Schwellenbach, he’s senior investigator with a Project on Government Oversight. So from the company’s point of view, it proved it was small per SBA definitions, won on appeal. So really, the DLA has no choice but to make that award, if in fact, all things being equal that had the best bid – correct?

Nick Schwellenbach: Right, right. So one thing we learned during the course of this investigation was that there were actually concerns inside of the Defense Logistics Agency about a decade ago that were shared with Pentagon, law enforcement officials at the Inspector General, at the DoD, which was a new piece of information that came out of our Freedom of Information Act request. Pentagon law enforcement agents at the time, and this is 2011 keep in mind found that they couldn’t do anything, at least according to the memo that we got. They said that there wasn’t anything actionable that they had in hand, but that the Defense Logistics Agency had a real concern, because ADS was dominating this tailored logistics support contract. And this is a contract used to clothe troops in the field to get them knives, scopes for guns, all sorts of gear that troops might want. And EDS is considered an intermediary company. They’re classic middleman, they connect suppliers that actually make the gear. And the criminal agents wrote in 2011, that DLA could if it wanted to take administrative actions to restructure this contract. So ADS went and dominated so much. And the criminal agents wrote that it appeared that healthy competition was being negatively impacted over the last decade. It doesn’t look like DLA has taken any actions to protect taxpayers. So there’s a question of is there criminal behavior or civil violations, but then there’s also just our taxpayer interests being protected, regardless of any official wrongdoing.

Tom Temin: And a couple of members of Congress have expressed concern about this, but there’s been no real action otherwise – right?

Nick Schwellenbach: There have been at least two letters, actually three letters, written in response to our February investigation. One was a letter that was led by House Representative Nancy Mace, she’s a Republican out of South Carolina. And it was a bipartisan letter joined by both Republicans and Democrats in the House. And then the House Small Business Administration a couple weeks ago, on March 31, the chair and ranking of that committee also sent a letter to the SBA asking the agency questions about ADS. And then there was a third letter also by Senator Tom Tillis, which hasn’t been made public yet, raising questions about this company and the DLA contracts especially.

Tom Temin: So it stands now then that the contract is in place, and people are ordering clothing and knives and scopes, and all the bric-a-brac that you would need by military forces through ADS.

Nick Schwellenbach: Yes, there’s this huge contract that ADS won back in January. And it’s not the only company that won that contract. There were five other companies that were also awardees. But on that contract, which I mentioned earlier, the tailored logistics support contract. Historically, the Atlantic Diving Supply has totally dominated the contract that’s one of these IDIQ contracts, definite delivery, indefinite quantity contracts. And military buyers, as well as other federal agencies can use this contract to buy gear as needed. So it may be worth up to $33 billion over the course of the next decade. And if past is prologue, ADS will win the lion’s share of those awards. We’ll see about that.

Tom Temin: Alright, interesting story. I guess there’s more to come yet if some of the I guess, oversight gears start to get in place. Nothing from the Inspector General of the DoD?

Nick Schwellenbach: Well, the SBA inspector general has been fairly vocal. In past press releases when there have been settlements involving this company, SBA inspector general Mike Ware, he has put some pretty strong quotes in DOJ press releases. In terms of the DOJ inspector general’s office, we’ve heard they want tips about this company, if they’re actionable tips that they encourage people to go to the hotline over there. So I think there’s interest clearly there are criminal agents in the federal government who have worked on this case. There was an award last October to the federal investigative team that worked on the ADS case, which had a criminal side to it that led to charges against the heads of non ADS companies that were working with ADS. But no charges were ever brought against anyone at ADS, which is a fairly unusual outcome in these kinds of cases given that court records show that the chairman of ADS, Luke Hiller, at least according to the DOJ was the person who initially brought together the criminal scheme that led to the prosecution of three other people me years later.

Tom Temin: Nick Schwellenbach is senior investigator with the Project on Government Oversight. Thanks so much

Nick Schwellenbach: Yeah, thanks for having me Tom. 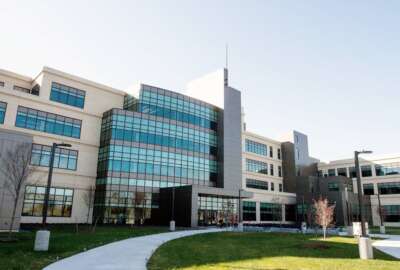 What Atlantic Diving Supply says about itself and its DLA contract