Nearly 80% of the trillion dollar infrastructure bill is slated for grants. Only a sliver is destined for federal contracts. That’s all according to a detailed analysis by Bloomberg Government. For details, BGov senior data analyst Paul Murphy joined the Federal Drive with Tom Temin.

Interview transcript:
Tom Temin: Paul, good to have you back.

Nearly 80% of the trillion dollar infrastructure bill is slated for grants. Only a sliver is destined for federal contracts. That’s all according to a detailed analysis by Bloomberg Government. For details, BGov senior data analyst Paul Murphy joined the Federal Drive with Tom Temin.

Paul Murphy: Good to be with you, Tom. Happy holidays.

Tom Temin: And nobody can discern what’s really in the numbers better than you, Paul. So tell us about this bill. What is it really all about here?

Paul Murphy: Well, it’s a fascinating piece of legislative and financial artisanship. It’s actually a hybrid authorization and appropriations bill. It’s got 11 parts and the first half roughly is reauthorization of the Surface Transportation Act, and then the Surface Transportation Reauthorization Act, Surface Transportation Investment Act, basically Highway Trust Fund and related programs. And then it’s got a bunch of other infrastructure items added to that, and various divisions going down division A,B,C,D and so forth. You get to division J, and it’s the appropriations that they’re pushing out quickly so that they can jumpstart all the infrastructure programs, even as the CR is ongoing through Feb. 18.

Tom Temin: So is this bill mainly about bridges and roads and I don’t know what else, dams and that kind of infrastructure? Of $1 trillion, you’re looking at 15% is actually for contracts. And is that for federal contracts? Or is this mostly going to be done through the states?

Paul Murphy: Well, the trillion figure is a combined figure with the authorization and the appropriation. So the authorization is roughly $650 billion, and the appropriations about $550 [billion]. So we went through the appropriations line item by line, a 1,000-page bill, and we went through item by item. And we detailed the parts of the appropriations bill, one by one, and then made assessments as to whether they were mostly grants, mostly contracts or a mix. So out of that, roughly $550 [billion], we determined there were about 138 programs that were combination of contracts and grants, or just exclusively contracts. And about $80 billion of that is actually exclusive contracts. We went through the supplemental documents from OMB, we went through USAspending, really researched these programs to get a feel for exactly what was contained in them. We think this is a pretty good number. And the goal, of course, is to try and help clients because we’re getting a lot of questions about what companies can reasonably pursue. So we’re mostly focused on federal prime contracts. And so these are prime contracts directly issued by agencies. And we think this is a good number to hang your head on, roughly about $125 billion fenced in total contracts, and mix of contracts and grants.

Tom Temin: Alright, so $125 billion in there for federal contracts, that is contracts led by federal agencies. And for what, what is it they’re going to contract for?

Paul Murphy: Well, mostly by RSS. We went through, after we detailed the items, after we assigned contract and grant categories, we went through and looked at the different markets. And it looks like most of it’s going to be for energy. It looks like a lot of alternative power programs, a lot of battery recharging stations, a lot of infrastructure to strengthen the grid, and make the grid more efficient. But then after that, based on our preliminary assessment, we’re looking at a lot of water and wastewater system rehab for lead pipes, pollution from super funds, other pollution sites around the country that have been contaminated. Or they’re strengthening the water cleanliness and wastewater treatment. And then comes communications. The big chunk of that is going to be broadband, broadband investment, broadband extension into rural areas, broadband extension into underserved areas. Those seem to be the key items.

Tom Temin: Alright, we’re speaking with Paul Murphy, he’s senior data analyst at Bloomberg Government. So that’s the $125 billion. But you said also, there’s a ton of grants coming under this bill. Is it possible to tell where those are going in general, and what those are intended for? I mean, is that where the states get to build roads and bridges?

Paul Murphy: And that’s where you get the roads and bridges. Most of the highway infrastructure is funded through the Highway Trust Fund, the mass transit trust funds, and through grant programs from the Department of Transportation. And you’re starting to see now if you monitor the Federal Register, which we all do, of course, you can see notices coming out. The Federal Highway Administration just issued its allocation notices for the states. One of the things this bill does that’s kind of interesting it utilizes something called a contract authority, not budget authority, it’s contract authority which basically enables agencies to incur obligations in advance their appropriations. And so they issued these allocations so that the states and localities can start planning for the highway programs that they haven’t lined to be funded by the Infrastructure Act.

Tom Temin: Yeah, so build it on a wish and a prayer, I guess and hope the money will come through.

Paul Murphy: Yeah, let’s hope that there’s gonna be a budget at the end of the tunnel here with the CR going to Feb. 18. I think in all likelihood, there’s going to be but still, I think part of the goal of this bill, this IIJ (Infrastructure Investment and Jobs) Act is to jumpstart these programs in advance to get them going before the CR and the appropriations bills are passed.

Tom Temin: So then a large portion of this trillion-dollar so-called bill then is really found in appropriations of the regular budget that have not come through yet.

Paul Murphy: Yes, a very good part of it still remains to be seen. A lot of the bill, I think, is just going to fund programs that are ongoing with a boost. With this boost, we see in the division J of the bill, a lot of this is additional money, in addition to the normal authorization amounts, we would expect to see. And along with that, I think we’re gonna see a lot of existing contracts be utilized to get this work out the door, because as you know, when these funding bills come so late in the year, there’s a very narrow window to push this money out the door before the end of the fiscal year. So another thing you’re seeing in this bill is a lot of the money is multi year funding. So they make explicit that, you know, it’s going to be available for three, five, 10 years. So hopefully, it won’t go away at the end of September. However, there’s the regular authorizations that have to be concerned about that.

Tom Temin: Now, on the grid, getting back to that $125 billion sliver that is for federal contracts, what kinds of companies do this sort of work? How many wiring companies are there that string wires on those big metal towers that go interstate?

Paul Murphy: Oh, there’s hundreds, hundreds. And obviously, there’s some big vendors that you might expect that are involved in EIS, the transition to the new communication systems. The big engineering companies of course, are going to be the likely go-to companies, even if they aren’t the primes. They may wind up being subs to other primes. But they are a lot of the companies that are doing work right now for, particularly for the Army Corps, and at the state and local level for the state departments of transportation. Because these grants, which is going to be most of the money coming through the IIJA. And the grants will typically go to states in the form of block grants or other kinds of grants, and then re-issued as contracts at the state and local level. So a lot of these companies are well known, but there’s a heavy emphasis, at the end of the bill, they talk about reauthorizing Minority Business Development Agency, creating a Minority Business Development Center, also creating rural Minority Business Development Centers. So there’s a real active push to engage small businesses, underserved communities, as part of the infrastructure rebuild.

Tom Temin: Got it and in these types of civil projects, water and wastewater grid construction, or whatever they do with grids, rewire it, and I don’t know much about the electrical grid. And for communication that’s installing broadband types of devices, then is the general model here, that you’ve got large engineering and contracting companies that would then use subs, which presumably they would try to make as small and disadvantaged businesses?

Paul Murphy: Well, I don’t see any way around that. I think that this money is being pushed out quick. I think the whole intent of passing the bill now in advance of the end of the CR is to get these projects jump started. And so I think there’s going to be heavy emphasis on use of existing contracts and funding vehicles. A lot of vendors have been pre-vetted. They have vehicles to do this work. So I would expect at least in the short term, that they would try and utilize the resources and the financial contract vehicles they have in place. Again, with the CR going through February, there’s really not much time to administer procurements through the end of the fiscal year and a lot of agencies are just going to try and push this money out the door in the most efficient way possible.

Tom Temin: So the scramble is on then?

Tom Temin: Paul Murphy is a senior data analyst at Bloomberg Government. As always, thanks so much.

Paul Murphy: Thank you, Tom. Good to be with you. 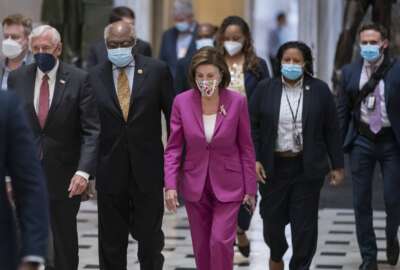 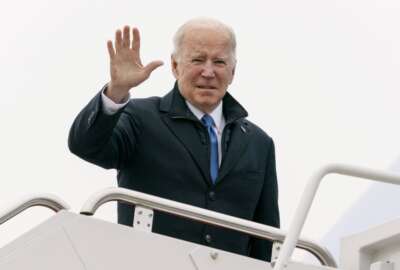 WH has new slogan on infrastructure, but message the same 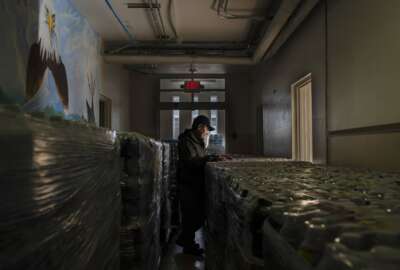