A federal appeals court ruled Friday that the Biden Administration’s vaccine mandate for federal contractors can largely go back into effect — at least for now — overturning a lower court ruling that enjoined the contractor mandate nationwide.

The decision was far from a victory for the administration, however. The three-judge panel’s majority found that a narrower injunction to block the mandate would have been warranted, and that once the case is fully litigated, the...

A federal appeals court ruled Friday that the Biden Administration’s vaccine mandate for federal contractors can largely go back into effect — at least for now — overturning a lower court ruling that enjoined the contractor mandate nationwide.

The decision was far from a victory for the administration, however. The three-judge panel’s majority found that a narrower injunction to block the mandate would have been warranted, and that once the case is fully litigated, the plaintiffs are at least “reasonably” likely to win their claim that the president can’t use his authority under procurement law to mandate vaccines for contractors.

But the court found Georgia District Court Judge Stan Baker went too far by applying the injunction nationwide during the case’s earliest stages last December. Instead, the court ruled, the injunction can only apply to the handful of parties who actually sued.

In this case, that means the government is barred from enforcing the mandate against members of the Associated Builders and Contractors (ABC), and state agencies from seven states that were part of the same suit: Georgia, Alabama, Idaho, Kansas, South Carolina, Utah and West Virginia.

“Here, the district court relied on improper considerations to justify its nationwide injunction,” according to Friday’s opinion. “It emphasized that [ABC members] are located ‘all over the country,’ and that, in recent years, they were collectively awarded most federal construction contracts. Stretching logic, the court reasoned that if it ‘were to enjoin the enforcement of the mandate only in the Southern District of Georgia or only in Georgia, Alabama, Idaho, Kansas, South Carolina, Utah and West Virginia,’ then ‘members would not have injunctive relief as to covered contracts in other states.’ But injunctive relief operates on specific parties, not geographic territories, and identifying the plaintiff states and trade association members is possible.”

And although the ruling theoretically reopens the door to enforcement of the vaccine mandate against a broad swath of other government vendors, Ben Brubeck, ABC’s vice president of regulatory, labor and state affairs, called the ruling a “major victory” for his group’s members.

“The injunction was a direct result of ABC intervening as the lone business group challenging the federal contractor vaccine mandate, along with the plaintiff state governments,” he said in a statement Friday evening. “ABC will continue to lead efforts to push back on the Biden administration’s executive overreach harming federal contractors with respect to COVID-19 vaccine mandates and other anti-competitive and costly policies.”

Next steps for contractor mandate are uncertain

The administration completely suspended enforcement of the contractor mandate right after Judge Baker’s decision last December, and hasn’t yet said how it will respond to the new ruling partially lifting his injunction. A spokesman for the Office of Management and Budget did not immediately respond to an inquiry Friday evening.

But even if the administration decided it wanted to take another run at enforcing the mandate — after having had it completely barred for the past nine months — determining the specific contracts in which the mandate could now be enforced would be a fairly tricky endeavor.

Although the Georgia case was the only one that imposed a nationwide injunction, other plaintiffs have won more limited injunctions.

In November, a federal judge in Kentucky imposed an injunction barring the contractor mandate in that state plus Ohio and Tennessee. The 6th Circuit Court of Appeals upheld that decision in January. And in April, a U.S. District Court judge in Arizona issued a permanent junction barring the contractor mandate there. That case is now before the 9th Circuit Court of Appeals.

As one of the 11th Circuit judges noted during oral arguments in April, there’s a fair chance that the Supreme Court will need to decide what the nationwide legal landscape is for contractor vaccine mandates.

Judges divided over whether vaccine mandate was legally authorized

The 11th Circuit panel was split on the underlying issue in the case: whether the Procurement Act gives the president wide enough discretion over government acquisition policy to mandate public health measures.

In a short concurring opinion, Judge J.L. Edmonson wrote the plaintiffs had a “reasonable” chance of proving at trial that it does not.

Judge Britt Grant, however, was much more certain that the mandate overstepped the government’s authority.

“The act confers broad but not unbounded authority,” she wrote in Friday’s lead opinion. “Nothing in the act contemplates that every executive agency can base every procurement decision on the health of the contracting workforce. Instead, the statutory scheme establishes a framework through which agencies can articulate specific, output-related standards to ensure that acquisitions have the features they want.”

The court was unanimous in finding that the district judge abused his discretion by applying the preliminary injunction nationwide.

But in a partially dissenting opinion, Judge Lanier Anderson wrote that he would have upheld the Biden Administration’s authority to issue the mandate in the first place. He agreed with the administration’s position that the health of the contracting workforce has a “close nexus” to the “economy and efficiency” of the federal procurement system.

“The Procurement Act very clearly grants to the president the authority to include in the contract provisions designed to result in the government work being performed by persons qualified to complete the work in a competent and timely manner, he wrote “Because the vaccination requirement has such a close nexus to best assuring that the government work will be completed without delay and in a timely manner, it seems to me that it falls comfortably within the clearly authorized powers delegated to the president.”

Friday’s decision does not affect the separate vaccine mandates for government employees or members of the military, both of which are the subject of numerous other court cases.

The mandate for federal employees is still on hold because of a separate nationwide injunction. A District Court judge in Texas first issued the injunction in January. A panel of the 5th Circuit Court of Appeals overturned that decision in April, temporarily allowing the employee mandate to be reinstated.

But the full 5th Circuit stayed that decision in June, blocking the mandate once again. The full court is scheduled to hear oral arguments in New Orleans on Sept. 13.

The Defense Department’s vaccine mandate for military members has so far survived without any sweeping nationwide injunctions, but District Court judges have blocked the military services from enforcing it against individual plaintiffs in a handful of cases. 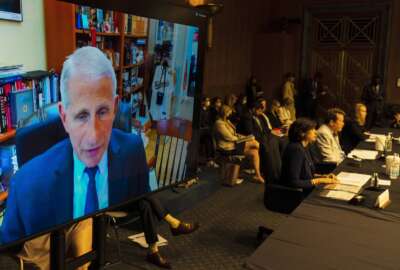