It didn’t take long for the Defense Department’s $10 billion cloud contract to come under protest.

Oracle says it’s protesting DoD’s rationale for making JEDI a single award contract. Under the 2008 Defense Authorization Act, DoD must issue a determination and findings (D&F) to explain its reasoning for using...

It didn’t take long for the Defense Department’s $10 billion cloud contract to come under protest.

Oracle says it’s protesting DoD’s rationale for making JEDI a single award contract. Under the 2008 Defense Authorization Act, DoD must issue a determination and findings (D&F) to explain its reasoning for using a single award task or delivery order contract approach that’s worth more than $112 million.

“The technology industry is innovating around next generation cloud at an unprecedented pace and JEDI virtually assures DoD will be locked into legacy cloud for a decade or more. The single-award approach is contrary to industry’s multi-cloud strategy, which promotes constant competition, fosters innovation and lowers prices,” said Oracle spokeswoman Deborah Hellinger in an email. “The DoD seeks to procure so-called ‘commercial services’ that are wholly inconsistent with the commercial sector, and the determination and findings falls far from meeting the rigorous legal standards required for a single award contract.”

The protest doesn’t stop DoD from receiving and evaluating proposals, but it does stop them from making the award.

GAO has until Nov. 14 to decide the protest.

“We do not comment on pending litigation,” said DoD spokeswoman Heather Babb.

Oracle’s decision to submit a pre-award protest isn’t surprising to industry experts and despite the fact DoD released two draft RFPs and reviewed more than 1,000 comments from industry over the last four months. DoD Chief Information Officer Dana Deasy took over the JEDI initiative and strategically paused it to ensure it was focused appropriately.

Congress has been paying close attention to JEDI as well, asking DoD to justify its single award approach, and adding more reporting requirements in the 2019 Defense Authorization bill.

In the court filings, Oracle detailed three reasons why the JEDI solicitation is faulty.

“This anti-competitive RFP violates law and regulation, and creates significant risk that DoD will award a 10-year, $10 billion contract to a company that will not offer the best value for all the potential JEDI Cloud user’s current and future cloud service needs,” Oracle’s lawyers write.  “The DoD determination and findings oddly intimates that DoD will receive proposals for firm fixed prices to meet DoD’s future, unarticulated tactical cloud computing needs (classified and unclassified) for the next 10 years and today can determine the single best value cloud computing technological leader over the next 10 years when some — if not most — of the impactful technology has yet to be developed. Congress prohibits the use of single source IDIQ contracts in these circumstances. Therefore, this protest challenges the failure to use the Congressionally preferred multiple award approach to the ‘maximum extent practicable,’ the flawed D&F, and several related anticompetitive aspects of the JEDI RFP, each of which will frustrate fair and meaningful competition in this significant market. “

The first point Oracle brings up about JEDI is DoD’s rationale in its determination and findings that a single award contract is appropriate doesn’t meet the spirit or intent of the law.

Additionally, Oracle argued DoD contradicts itself by saying in the D&F that the offerors will provide a commercial catalog of cloud services that will be based on a single, firm, fixed price unit. But at the same time, Oracle argued, DoD wants JEDI to stay on the leading edge of technology so what that looks like and how much it will cost will constantly change and therefore goes against the Pentagon’s own reasoning for a why a single award makes sense.

“The JEDI RFP involves the precise circumstance for which Congress has  directed agencies to use multiple award IDIQ contracts. The only lawful and reasonable approach is multi-vendor task order competitions over time,” the document states.

Oracle’s second argument focused on whether DoD performed a “meaningful price evaluation” as part of its rationale for a single award contract.

“To do so, the RFP must reflect the services that the department expects to purchase across the entire contract. Here, the department has elected to use a limited scenario approach under which an offeror can select from any of its many current cloud offerings to fulfill the scenario. The absence of detail as to what the offerors must provide in the scenarios most assuredly will leave the Department with no basis to meaningfully compare even the scenario proposals,” the document states. “[B]ecause infrastructure-as-a-service and platform-as-a-service offerings are not a commodity like a pencil, and cloud service providers offer differing features and functions, which cloud service provider will offer the most cost effective solution will vary depending on the ultimate function, work requirements, and applications. Absent a multiple award approach, this type of pricing evaluation falls far short of the statutory bar.”

The company sayid a single award approach necessarily requires greater specificity regarding the services DoD solicits for JEDI in order to assess the best value offeror.

“Although the configuration of services proposed may be ideal for the six hypothetical price scenarios used for the evaluation, there is no way to know whether the same configuration approach will also be optimal for the future specific needs of the many potential JEDI cloud users, or whether some other approach is more optimal, what the cost of the configuration will be, and what the ‘best value’ would be, in terms of technical considerations relative to price, for the undefined future tasks,” the document states. “Multiple awards represent one means to address this issue.”

“[The] department’s unreasonable decision to limit the potential 10-year, $10 billion IDIQ contract to a single awardee violates the law and prejudices Oracle’s ability to compete,” the document states.”Equally problematic, the evaluation scheme prevents the department from evaluating the relative price of the competing offerors and determining the best value, further harming Oracle’s ability to compete.”

This is Oracle’s second bid protest of a big DoD cloud effort. The company won its protest of the U.S. Transportation Command’s $950 million deal for cloud services using an Other Transaction Agreement (OTA) approach. A month later, DoD quashed the deal, knocking it down to a $65 million deal and making the cloud services only available to USTRANSCOM, but ended up canceling the OTA all together. USSTRANSCOM is hosting an cloud industry day on Aug. 14 in Illinois. 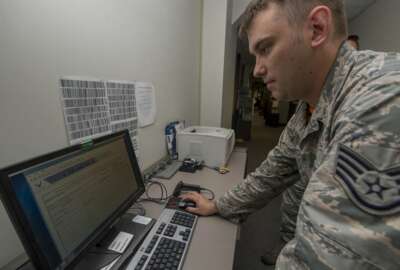