Fixed-price contract. It’s a common strategy for the government. Contractors need to understand that every word in that three-word phrase is there for a reason. Inflation, COVID, supply chain, if they drive up your costs, tough luck. That point was reinforced in a recent lawsuit.  The Federal Drive with Tom Temin  heard from Smith Pachter McWhorter procurement...

Fixed-price contract. It’s a common strategy for the government. Contractors need to understand that every word in that three-word phrase is there for a reason. Inflation, COVID, supply chain, if they drive up your costs, tough luck. That point was reinforced in a recent lawsuit.  The Federal Drive with Tom Temin  heard from Smith Pachter McWhorter procurement attorney, Zach Prince.

Tom Temin: I don’t know why contractors sometimes don’t understand this. But it doesn’t really matter what drives up the cost. Tell us about this case.

Zach Prince: Yeah, that’s right, Tom, you know, we’ve talked about this before, as inflation is ongoing, supply chain struggles are continuing. It’s something worth reiterating. And it’s something that’s going to keep coming up. Ace Electronic Defense Systems out of the Armed Services Board of Contract Appeals involving the contractor performing under a fixed-price delivery order for various parts associated with cruise missiles. The contractor, what is a pretty familiar fact pattern at this point, had a substantial increase in the prices, it was being charged by one of its vendors for certain materials, supposedly, the price increase was due to COVID-19 issues. And the contractor couldn’t source the parts from anybody else. So they had huge losses they were facing under this contract, as they told the government, cost increases put substantial financial stresses on them, unlike anything they’ve ever experienced. So they’ve got and contractors in general have a huge incentive to try to figure out a way to get more money under fixed-price contracts. The problem is there really isn’t a way.

Tom Temin: So they sued anyway, to try to get that rule bent in some way?

Zach Prince: They did in a somewhat novel argument. They pointed to a memo that the Office of the Undersecretary of Defense for Acquisition and Sustainment put out in July 2020. That memo said that while the general rule is contractors under fixed-price contracts have the risk of cost increases, contracting officers have discretion to modify contracts using the changes clause to reflect changes in the government’s needs. What that doesn’t say, I think a careful reader notes, is that there’s any reason or any basis for the government to increase the contract price, simply because the contractor is facing some sort of cost increase,

Tom Temin: Right. In this case, the government’s need did not change, it was the same order for the same quantity of cruise missiles. And so therefore, there was no change under that memorandum from the secretary.

Zach Prince: That’s right. And that’s the same sort of language that we saw in May and September 2022, memoranda from defense pricing and contracting. They said, Remember, these are fixed-price contracts. Despite supply chain issues, despite inflation issues, there’s no basis for the contracting officer to change the price just because of cost increases. But as the September memo pointed out, if there’s some consideration, that is a change in government needs for something the contractor has given up, then there might be some basis for relief. But it’s not just on its own. So the contractor here, either intentionally misread the memo or accidentally, but tried to use this as the basis to get some recovery.

Tom Temin: And just to be clear, the contracting officer then has no discretion in that circumstance of a fixed-price contract under the FAR to just grant the relief because he or she understands the contractor could go out of business or is facing losses.

Zach Prince: That’s right. The only basis for a contractor to recover in those circumstances are to employ this extraordinary contractual relief mechanism under Public Law 85 804. That is really rarely granted. I’ve seen a few cases, but you need to demonstrate to the government and not the contracting officer. This is to the secretary level that this is essential to the national defense, and that you’re going to go belly up and imperil some major programs if they don’t grant the relief. We don’t see that happen often.

Tom Temin: In the case of ACE Electronics Defense Systems, they were just making a sub-system within the overall missile. They’re not the prime contractor for these missiles, correct?

Zach Prince: That’s right. And more than that, they didn’t even demonstrate in the board’s view, the real impact that they would have they made conclusory statements. One of the footnotes in the board’s decision says we have no real basis to evaluate the impact on the contractor didn’t matter, because the law wouldn’t have entitled them to relief anyway, but they didn’t really do the full job here.

Tom Temin: We’re speaking with Zach Prince. He’s a procurement attorney at Smith, Pachter McWhorter. And so it’s probably worth reviewing, under which circumstances inflation, supply chain pressures. I mean, it’s all inflation. If prices go up, it doesn’t really matter what the cause is: federal spending or sunspots or COVID. But what are the circumstances now currently under which contractors can get relief for higher costs from inflation?

Zach Prince: Well, contractors should be doing a better job now with trying to negotiate economic price adjustment clauses. And those can be devilishly difficult to negotiate on the front end, the factors that you pick that might entitle you do a price adjustment can be hard to establish and figuring out what the right metrics are to peg your entitlement to can be difficult. But that’s the only way that you’re gonna get a price increase in a fixed price contract.

Zach Prince: But then you have a whole other slew of problems of ensuring that your accounting systems are correct, tracking the FAR part 31, allowability principles, potentially compliance with the cost accounting standards. And as anybody who spends a lot of time in the cost-plus world knows that you might be subject to challenges five or six years down the line for direct costs that the people who incurred them and the reasons you incur them, the evidence just isn’t available anymore.

Tom Temin: Right. So you really, and we talked about that not too long ago, also, you really need to have your systems and your procedures geared and aligned toward cost-plus, before you decide to enter that phase of business.

Zach Prince: Absolutely. And if you don’t, it’s a huge risk.

Tom Temin: Missiles are not the type of thing that are generally bought under task orders under Government  Wide Acquisition Contracts, we’re seeing the emerging generation of GWAC come out with order level pricing negotiations, and they’re not negotiated as part of being on the GWAC. But that’s not really anything close to what’s happening in the world of missiles and military platforms.

Zach Prince: Not usually no.

Tom Temin: With the volumes we’re using them at and sending them around the world maybe they should be but then that’s a discussion for another day. So what happened then, it was dismissed?  And that’s the end of it? There’s no appeal for Ace Electronics?

Zach Prince: They could appeal. But if I were advising them, I would strongly tell them not to, I think this whole case was throwing good money after bad for them. It was a low dollar value claim to begin with, they were only seeking an adjustment of 113,000. And that’s really not enough money at stake to justify an appeal. It’s hardly enough money at stake to justify a claim, particularly when the law is very much not on your side.

Tom Temin: What happens to a contractor that says I just can’t deliver, therefore. Because I can’t get the parts or the parts are too expensive, that has risks for the next round of contracts, too, doesn’t it?

Zach Prince: Absolutely does. If a contractor defaults, which that would be they can be terminated for default. They have bad past performance ratings, they could be suspended or debarred from government contracting. So the ramifications are quite significant.

Tom Temin: And other than fixed-price, or cost-plus for this type of commodity, is there any other mechanism under the FAR that the government might agree to that would be more attractive to the contractor to anticipate changes in costs for components?

Zach Prince: A fixed-price contract with an economic price adjustment clause is the only real way forward that I can think of for contractor., The alternative is building in a lot of contingencies. And you just have to be upfront with the government about what assumptions you’re putting into your price. If those come true, then you might break even.  If they don’t, if inflation is lower, you might have a windfall. And of course, the inverse is true, too. You could still take a loss.

Tom Temin: But why would they not have built in that adjustment clause in the first place? Is that something that might have disqualified them from consideration or maybe made them lose the bid?

Zach Prince: Until recently, it was really rare to see those clauses. I’ve seen them maybe once or twice ever, in my experience. Now they’re starting to show up fairly frequently. I think the government views an economic price adjustment clause not only is very difficult to administer, but as somewhat negating the benefits the government have a fixed-price contract.

Zach Prince: That’s right. Although there are limits, you can only get an increase up to 10%. For the most part, the government gets a decrease with an unlimited floor. So you know, if your assumptions go way down, which doesn’t seem likely now, the government gets to get the benefit of that, too.

Tom Temin: Right. It’s like being on an elevator hanging by a thread, I guess.  Zach Prince is a procurement attorney at Smith, Pachter McWhorter. 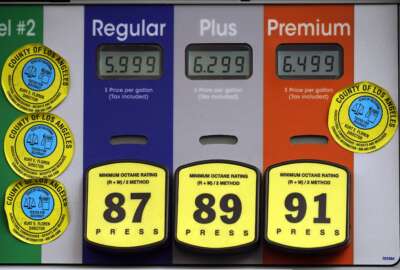 Addressing the impact of inflation on government contracts