“Competition is the essential ingredient that leads to high-quality products at lower prices,” Chairwoman of the FTC Edith Ramirez said in the press release. “This is especially critical when it comes to America’s defense industry, which provides the weapons and equipment that our men and women in uniform rely on every day.”

Antitrust laws, such as the Clayton Act, place restrictions on certain mergers and acquisitions in the defense industry in order to maintain a certain level of competition that promotes innovation and ensures the Defense Department has enough potential bidders on various contracts. For example, tier-1 defense companies such as Lockheed Martin, Northrop Grumman, BAE Systems and Raytheon, among others, are forbidden from merging due to fears of monopolies and lack of competition.

“The Department of Justice is committed to preserving competition for current and future defense procurement,” Bill Baer, assistant attorney general of DoJ’s Antitrust Division, said in the press release. “In light of recent speculation about possible future consolidation, we thought it timely to reinforce that message.”

Larry Davis, a partner and founder of Aronson Capital Partners, an investment banker who specializes in mergers and acquisitions, said this is likely just a case of the agencies proactively making their voices heard in reaction to general rumblings and trends within the industry.

“I wouldn’t call it a shot across the bow,” he said. “I think there’s been a lot of merger activity, a lot of talk within the industry, CEOs of tier-1 companies making a lot of moves in divestiture and consolidating their businesses. The [agencies are] reacting to that, saying, ‘You can’t reshape the defense industry without involving us.’”

In response to this release, Daniel Stohr, director of communications for the Aerospace Industries Association, referred to a statement the AIA released in October in response to comments from DoD’s Undersecretary for Acquisition, Technology and Logistics Frank Kendall. Kendall expressed concerned about the rate of mergers and acquisitions happening in the federal market in the aftermath of the Lockheed Martin-Sikorsky merger.

“Consolidation is market-driven and enhances the efficiency with which we deliver the world’s best equipment to the American warfighter,” AIA’s statement said. “We’re seeing fewer and fewer new programs which start farther and farther apart. With fewer programs for which to compete, the stakes for individual companies grow ever higher — loss of a contract competition could mean the end of a company’s ability to compete for defense work. In this environment, it’s no surprise that industry is looking to become leaner and more efficient.”

“We stand by that statement,” Stohr said in an email. 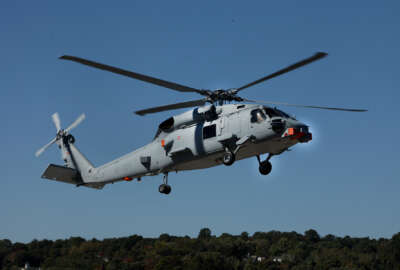 Lockheed buys Sikorsky in hopes of competing with Boeing