Two factors are driving military spending priorities: The shift in strategy to great powers competition, and the need to restore the U.S. technological edge, or offset. Data analysts at Govini looked at five years of Defense Department spending to determine whether spending on Research Development Test and Evaluation, or RDT&E, reflects those priorities. Govini CEO Tara Murphy Dougherty joined Federal Drive with Tom Temin with what they found.

Tom Temin: Govini has done a series of reports on how well federal spending, especially in the DoD area, matches the stated goals of the national defense strategy. This time we’re looking at research, development, test and evaluation, RDT&E spending. First of all for 2019, and I guess we don’t know what the 2020 is gonna look like yet, but give us a sense of how much the government does spend on that area in the first place.

Tara Murphy Dougherty: Overall, we’re seeing trends going in what we think is the right direction, given the NDS priorities over the FY 15 to 19 period DoD’s RDT&E  investments grew by about 40%. And their slated to surpass $100 billion in FY 20. So, as you can see, there is not just a significant investment being made, but I mentioned trending in the right direction.

Tom Temin: When we talk about those topics research, development, test and evaluation, it’s not necessarily that all of that money is for the brand new correct? Could they also be testing and evaluating existing systems that might have been upgraded or renewed in some way?

Tara Murphy Dougherty: Absolutely. That’s one of the most interesting aspects of this entire dynamic. The question about the extent to which the department is continuing to invest in sustainment of existing platforms and longstanding capabilities that have served the warfighter well. But over the past four decades, balancing those investments against key investments in emerging technologies that we believe are really critical, and the department believes are really critical, to a potential future war fight with China or with Russia. That’s the crux of the issue, and so far what
we’re seeing is that this is an area where DoD is taking initial steps to make those key investments, but a significant amount of work remains to be done. For example, DoD spending on manned platforms overall received almost four times as much RDT&E funding as unmanned platforms over the time period that we were looking, that five year span from FY 15 to FY 19. Not necessarily a bad thing to continue investing in manned platforms. But if you think about the RDT&E portfolio or account in particular, we really want to see this as the initial phase of moving increasingly toward the emerging technologies

Tom Temin: From the data, can you discern how much of that really is aimed toward that leading edge and the change in doctrine toward great power of competition?

Tara Murphy Dougherty: We look at that across the entire portfolio. And we can see that in cases such as Air and Missile Defense and C4ISR and Advanced Autonomous Systems, we see spending absolutely on the rise. There are other areas such as readiness, resiliency, next generation combat platforms where we actually have seen a decrease in spending. So just looking across the entire portfolio, it’s really helpful to dig into the actual data in order to determine whether those balances are right.

Tom Temin: You have these structures that have been in place, like the Defense unit Experimental. Each of the armed services seems to have its own experimental, so called focused organization. And then you’ve also got the OTA spending, which is supposed to be for prototyping, which is on the increase. So can you sift out what spending goes through those organizations and then compare that to the OTA spending to get some sense of how much is really leading edge spending?

Tara Murphy Dougherty: We can, actually, and that is one area where we’ve seen significance strides. So the department has increased its use of nontraditional contracting mechanisms, which include OTAs, and are particularly designed to target this community of more innovative companies. That spending grew by about 67% over the 15 to 19 time period. I think whether we are actually working with nontraditional defense companies or non traditional companies that are interesting to the defense market overall was still an outstanding question. The department’s engaging these companies that the question of whether they sort of reached the right threshold in terms of getting what we want out of the relationship or engaging sufficiently remains to be seen.

Tom Temin: You’re also projecting in this report that the budget for RDT&E is projected to decline. Which doesn’t seem like the right trend for an armed service or military establishment that’s trying to rebuild its competitive edge or it’s offset.

Tara Murphy Dougherty: Exactly and I think that’s a question mark that DoD should turn into a declarative statement. In terms of adding some clarity to the long term outlook here is show, beyond just the five year term, whether investments are likely to continue to trend the way that we’re seeing them trend with the focus of the national defense strategy on modernization. As of right now, DoD is projected to spend nearly the same amount in the RDT&E account in fiscal year 2033 as it did in fiscal year 2017. While we don’t know exactly what the geopolitical environment will look like, the geostrategic competitions that were in in 2033, I would argue that we should probably be carrying out this approach longer than I think we currently are.

Tom Temin: There’s one other super trend over all of this. That is the rest of the world has caught up and surpassed the United States in this type of research and development spending in the years since the Vietnam era. Even though the United States spends an absolute sense more than it did, the percentage of work being done here in the United States has declined.

Tom Temin: Sounds like the bottom line is then that the spending really does not align with what are the stated priorities of the U.S. military in the world?

Tara Murphy Dougherty: Yeah, I think that we need to look not just at what makes sense within the United States, but certainly how we’re investing and what we’re investing in, vis-a-vis our competitors. One of the further complicating issues at play hears that the Chinese internal or national system does not reflect a similar structure in the United States. So we hold ourselves to standards that impact how we pursue research and development efforts in a way that China does not. That has a qualitative impact on the pace with which they are moving toward militarization of core R&D technologies. That has an overall impact on our competition with them as well. So there are essentially at least two different factors, if not more, that need to be considered as we compete in this realm.

Tom Temin: While we have you, you should probably explain the methodology that Govini uses, which is not to look at the spreadsheets that come out of the federal budget process.

Tara Murphy Dougherty: That’s right. So we attack everything that we’re touching in in this national security space from a big data approach and doing so at scale. We really believe that the answers lie in the data and the department and the rest of the United States federal government can continue to move in a direction of data back decision making. I think that we’re hearing that from our senior leaders that that’s an important direction to continue to move. We’re seeing the department in particular continue to rely on data more and more give. Govini applies artificial intelligence and machine learning to our own data set and government data sets as well, when in partnership with different federal entities in order to really pull the insights from the entirety of the data that’s available to us, not just the portion of data that a human analyst can sort of wrap their heads around and make senseless. 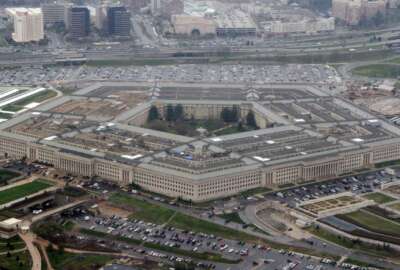