Many adjectives describe the Marine Corps. How about this one: thorough. The Marines are in the midst of a thorough testing program for something that might seem like a simple thing: A new workout uniform. Federal Drive with Tom Temin talked with the 19th Sergeant Major of the Marine Corps, Troy E. Black.

Tom Temin: Sgt. Maj. Black good to have you on.

Troy Black: Yeah. Good morning. Thank you very much for the invitation. I do appreciate it.

Tom Temin: And the workout uniform, that doesn’t change very often, does it? I mean, each generation kind of has its own version, is that a good way to describe it?

Tom Temin: Sure. So what are you seeking in a new workout? First of all, how is the workout uniform used? Is it simply for basic training? Or is it something that you might use for general training throughout a career?

Troy Black: Well, a combination of both. You know, our current uniform, simple as it is, isn’t very modernized. Materials aren’t modernized, they’re fit form, not really modernized. And we’re trying to do a couple of things here. One have a standalone physical training uniform. We don’t necessarily have that now, the current uniform is part of another uniform or marine pattern uniform or camouflage uniform. This was a standalone uniform. And the reason for changing it is fabrics have changed over time, you can even see in professional athletes, what they train in, isn’t necessarily a cotton shirt with canvas trunks. And we also have requirements to make sure we’re safe. So reflective materials in this sort of thing that aren’t part of the current uniform are not going to be part of this uniform. Instead of wearing like an extra reflective belt or reflective vest or this sort of thing.

Tom Temin: Yes, you’re right about that the fabrics have come a huge way, even the last 10 years compared to how they are able to weave polyester. And I speak from experience here. The issue is, or one of the issues, the fact that most of the high end workout gear is not manufactured in the United States. A lot of it’s made in the Philippines or in China, and so forth. So there’s an acquisition issue connected with this also, correct?

Troy Black: It could be. You know, obviously, there’s certain laws that require the Department of Defense and government agencies to purchase and produce things that are American made, USA made. Not a challenge here for us, or any of these uniforms. Heck, all the uniforms for the Marine Corps, whether the blue dress uniform, marine pattern uniform, much more complex uniforms and materials, all produced United States, and it won’t be any different for this uniform.

Tom Temin: Alright, so you’ve got several vendors competing here, what does the program look like in terms of testing? What’s going on?

Troy Black: So later this month, we’re going to begin to send out the first, I call it batch of uniforms to be tested and those are gonna be sent out to some of our entry level training pipelines to some of the instructors, folks that can return a good response back and give some good input on what’s right, what’s wrong, some things need to change. So that testing phase is going to begin here at the end of the month and hopefully we’ll get to a production issue process here following that in the next year or so.

Tom Temin: And you mentioned that these might also be used by people further along in their career, say, someone such as yourself, who’s a career Marine, or one of the officers that comes up through the academy and so on. This is something that older guys and gals would wear too.

Troy Black: Oh, absolutely. This will be the uniform, the physical training uniform for the Marine Corps. So that means all Marines.

Tom Temin: And what about female Marines? What special provision will these have for them? Because clearly, they need a different shape sometimes?

Troy Black: Well, I think that’s going to be determined during the testing phase. Everybody’s body shape, not just by gender, but everybody’s body shape is not generic. So, then we get into the testing phase, we’re going to have both men and women wearing the uniform and they’ll give good feedback on that. There’s also going to be what I would call, and you mentioned that you were a runner, a marathoner, the general uniform is going to be a standard shirt. Obviously, sizing and how that fits individuals is going to be part of the testing process, but the shorts are going to be more of a general purpose short. There’s also going to be, per request from some of the initial design, an optional runner’s short. Something that again, like someone like you will be more familiar with. You don’t want to run in, you know, above the knees shorts, you want to have a different kind of style to be able to run in. That’s going to be optional uniform that’s going to be tried and experimented with as well.

Tom Temin: We’re speaking with Troy Black, he’s the 19th sergeant major of the Marine Corps. And how does the decision get made as to which particular uniform will be chosen among the different vendors being tested?

Tom Temin: Because I was reading an article about this in one of the publications that covers military exclusively, and what I noted were the comments made by either current Marines or retirees. And some of them said, well, in my day, we trained in fatigues and combat boots. Not sure that’s true or not. But that’s at least what they said. And so I guess there’s some improvements in the experience of the Marine doing the training that you’re looking at too hear, correct?

Troy Black: You know, our veterans are very vocal. They’re the reason we’re here. We stand upon the shoulders of giants, and our history is just full of the great things that former Marines have done. However, there’s a lot of things have changed over the course of time. I’m certain 30 years from now there will be things about the Marine Corps they’re going to change that I may look at and go, wow, that’s interesting. But frankly, we’ve had a PT uniform now, we actually had a PT uniform prior to the current one, it was a yellow shirt and some red shorts. Maybe that was challenging for some folks at the time as well. Now we’ve got the current uniform, which is a green general purpose trunk, it’s a cotton, green shirt. And we’re just modernizing that. So I think every generation may be challenged with changes. But at the end of the day, the Marine Corps continues to train and fight and win. And this is gonna be one element of making us be able to do that better.

Tom Temin: I was thinking for what you said earlier, how much better fabrics have become, how much more functional they have, they don’t chafe as much, you know, and you know that chest area chafing can be a huge problem in long distance runs if you’re not careful. I wonder if what is learned from the workout uniform testing program and feedback could translate back to other uniforms.

Troy Black: Yeah, I would say potentially. I guess what I would say is if you go to any training facility, or even a civilian community, or definitely on bases, posts and installations, you’re going to see the types of uniforms that Marines are wearing, what kind of gear that they’re wearing while they’re in the gym. It’s anti microbial, it’s moisture wicking, generally it stretches for better mobility, it’s generally fast drying. And quite often you bought something off the civilian market, it’s probably got a reflective material on it in order to increase its safety when you’re running during low light times and periods. So I think all of those things are what we’re looking for, and what we’re getting ready to test and develop here for this new uniform.

Tom Temin: And I guess durability is an issue. One of the comments I read, again, not original, but I’m just relating it, is that they were worried that this uniform would stand up to the laundering process that happens on shipboard, which can, in the words of this one, comment or destroy just about anything?

Troy Black: That might be an observation, sir. But again, that’s part of the process of the development is making sure that the material is going to hold up for a certain period of time. There’s all kinds of regulations that before we approve a uniform in any of the services but in the Marine Corps in particular, it has to pass certain tests, durability, obviously being one of those tests.

Tom Temin: All right. And would these be available to civilian family members should this work out?

Tom Temin: Alright, Troy Black is the 19th sergeant major of the Marine Corps. Thanks so much for joining me.

Troy Black: Hey, thank you as well sir and I hope you have a great day. 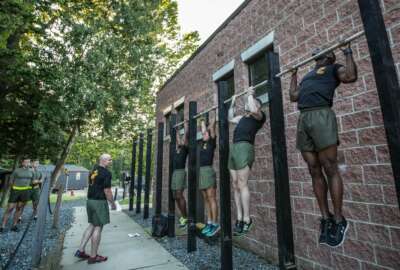 Quiz: What does the VA health record have in common with a Marine Corps T-shirt? 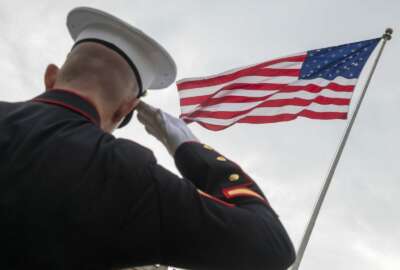 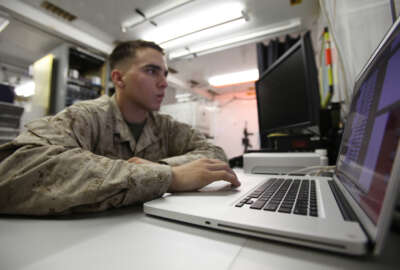