SAN ANTONIO, TEXAS — The Defense Intelligence Agency will soon issue an artificial intelligence strategy, with talent development being one of the top challenges facing DIA and organizations across the Defense Department.

SAN ANTONIO, TEXAS — The Defense Intelligence Agency will soon issue an artificial intelligence strategy, with talent development being one of the top challenges facing DIA and organizations across the Defense Department.

DIA put together a panel last year to lead the development of the strategy, Menon said. The goals at a “high level” are based on the National Security Commission on Artificial Intelligence’s recommendations. NSCAI recommended the DoD and the intelligence community be “AI ready” by 2025.

“Although we looked at it from different pillars, the most important one is talent and skills,” Menon said. “How do we attract the best and the brightest retain them in the intelligence community to enhance our mission capabilities?”

The strategy will also touch on platforms and tools, ethics and “explainable AI,” and international partnerships.

But Menon said the most pressing challenge to DIA’s aspirations is likely gaps in talent.

“We need the talent,” he said. “We have to cross train and upskill our staff, so they have the digital skills necessary to support us.”

DoD Chief Digital and AI Officer Craig Martell, speaking here on Dec. 13, also highlighted the talent challenge. The CDAO organization was established earlier this year through a combination of the chief data officer, the Joint AI Center, and the Defense Digital Service.

Martell suggested DoD should largely avoid competing with technology companies for individuals with technology doctorate degrees from some of the country’s top colleges.

Instead, Martell said the Pentagon should become a “machine learning practitioner” talent development incubator through training and education.

The idea rests on the notion that DoD will largely not build its own machine learning models and instead acquire them from industry. That’s where Martell said the CDAO organization will come into play. “We need to provide the scaffolding to help people contract and deploy models effectively, and get ongoing value,” he said.

DoD could develop the machine learning cadre through community colleges and Scholarship-for-Service programs, Martell said. Such a program would aim to train individuals who would work at DoD for three-to-four years, he said, before they could potentially move on having secured valuable experience in the AI and machine learning field.

While DoD would ultimately lose many of those people to higher paying jobs in industry, Martell said it would create a stronger technology recruiting pitch to help bring new talent into the department.

“I think if we can build that pipeline where people are sucking it out the end, we’re going to have people flooding to come in,” Martell said.

The NSCAI has also recommended a focus on recruiting and training new AI talent through the establishment of a Digital Service Academy. The idea, however, has yet to gain traction in Congress or the Biden administration.

“Using the NCAA and the NFL model, we would love to be that that pipeline or that hub where people do come and recruit from us,” he said during the media roundtable.

He said DIA is also looking to partner with other organizations to create “AI labs” for training and education. The agency has already worked with the National Geospatial-Intelligence Agency’s Moonshot Lab to conduct “joint hackathons,” as well as an AI hackathon with Joint Special Operations Command.

“We’re looking to invest in training,” Mathew said. “We’re looking to attract people through the mission, where they can see actual mission advantages, like when things that they work on are being shown on the news. That’s somewhat exciting.” 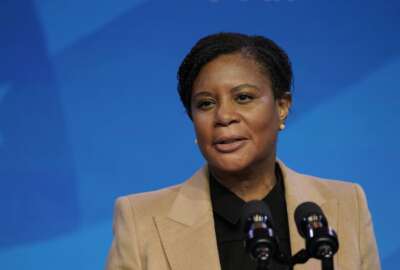