Defense Secretary Ashton Carter said Wednesday that he has advised President Barack Obama to veto the Defense Authorization bill Congress will vote on later this week for several reasons.

Carter said the Obama administration’s opinions about the bill haven’t changed since this summer when the House and Senate marked up their own respective versions of the National Defense Authorization Act, and the final agreement the two houses reached Tuesday retains most of the characteristics DoD leaders and the White...

Defense Secretary Ashton Carter said Wednesday that he has advised President Barack Obama to veto the Defense Authorization bill Congress will vote on later this week for several reasons.

Carter said the Obama administration’s opinions about the bill haven’t changed since this summer when the House and Senate marked up their own respective versions of the National Defense Authorization Act, and the final agreement the two houses reached Tuesday retains most of the characteristics DoD leaders and the White House dislike.

Their objections start with the fact that the NDAA agreement authorizes the shift of tens of billions of dollars in regular military spending into Overseas Contingency Operations (OCO) accounts as a work-around to spending caps in the 2011 Budget Control Act. The White House and DoD want the caps to be repealed outright, including for non-defense agencies.

“The bill attempts to evade the question of overall fiscal responsibility with this OCO gimmick, which is objectionable to me and others in other federal agencies, and I think it ought to be objectionable to the taxpayer and certainly to the warfighter,” Carter told reporters Wednesday. “These are not mysteries to anyone. I think we’ve been very clear about our position on a veto.”

Carter said his other objections have to do with provisions of the House-Senate agreement that would deny longstanding requests to reduce spending in certain areas of its budget, such as by retiring older weapons systems and conducting additional rounds of base closures.

“For several years now, we’ve proposed reforms that extend from health care to force structure so that we can get a better national security benefit for our defense dollars. Billions of dollars per year worth of those reforms are disallowed in this bill,” he said. “That’s not OK with me, because it takes money — which I already regard as short — and uses it in a way that we have said for several years is not in the national interest. I need to be able to tell the taxpayer that we need every dollar we’re given and that we’re using them in the best possible way, and this bill does not take into account the reforms we think are needed.”

White House spokesman Josh Earnest affirmed Thursday that the President will veto this year’s NDAA. But Congress intends to press ahead toward passage anyway with a vote scheduled on the House floor on Thursday.

“For the national security of our country, we need to pass this so that the world and our troops see that we can still function,” he told the House Rules Committee. “I understand that this does not solve all of our budget problems, lots of issues are out there and we need to deal with the appropriations issues by Dec. 11. It doesn’t solve everything, but it’s a good thing to do. I’m hopeful that this conference report, with all the good it does and with all that’s happening in the world today will get the support of not only all of our colleagues, but ultimately, the President.”

Thornberry also suggested Congress might be able to override a veto, because 71 members of the Senate and a nearly veto-proof majority in the House voted this summer to approve the original bills on which the bicameral compromise is based.

But a veto override seems unlikely at this point. However much they may agree with the more than 800 substantive provisions in the annual policy bill, Democrats are generally united in their view that Congress must not create a sequestration safety valve only for the Defense Department, because it would severely undermine the argument to lift the Budget Control Act’s spending caps for the entire government.

Rep. Adam Smith (D-Wash.), the Armed Services Committee’s ranking member, said he looks forward to voting for a future incarnation of the bill once this one is vetoed and the OCO controversy is sorted out.

Sen. John McCain (R-Ariz), the chairman of the Armed Services Committee, attacked that line of argument, noting that the Defense authorization bill does not actually appropriate any funding and argued that the NDAA is not the right venue to litigate a years-long deficit reduction battle.

“The NDAA is a policy bill,” he said in a statement Wednesday. “It does not spend a dollar and it certainly cannot raise the budget caps or deliver an agreement to fund the government. It is absurd to veto the NDAA for something that the NDAA cannot do. If the President vetoes the NDAA at this time of mounting global threats, he will be prioritizing politics and process over the security of our nation and the well-being of our armed forces.”

Carter breathed a slight sigh of relief on Wednesday as Congress was poised to approve a short-term funding bill that avoids a government shutdown until at least Dec. 11, but he emphasized that a continuing resolution would not be any better than forcing DoD to continue to live under the BCA caps.

Either way, he said, DoD is living under a “paycheck-to-paycheck” approach to federal budgeting.

“The alternative to a budget deal — a long-term continuing resolution — is merely sequester-level funding under a different name,” he said. “And the longer the continuing resolution lasts, the worse it becomes, eventually resulting in a $38 billion deficit in resources for our military if Congress chooses to pursue this path for the full year. The Department of Defense has done its best to manage through this prolonged period of budget uncertainty — seven years in a row of continuing resolution. What we have under sequestration or a long-term continuing resolution is a straitjacket. We would be forced to make irresponsible reductions when our choices should be considered carefully and strategically. These cuts are managerially inefficient and therefore wasteful to taxpayers and industry. It’s dangerous for our strategy, and frankly, it’s embarrassing in front of the world. And for our men and women serving our national defense and their families, it adds an absolutely undeserved element of uncertainty about their future.

The uncertainty, in and of itself, has serious consequences for DoD’s workforce — even if the government doesn’t actually go through another shutdown, Adm. Mike Rogers, the commander of U.S. Cyber Command, told a congressional hearing on Wednesday.

“The single greatest perturbation I’ve experienced with my workforce in my 18 months on this job has been about even the hint of another government shutdown,” Rogers said. “In the last week, I’ve had more agitation from the workforce than anything else I’ve experienced. And they are very open about telling us that they aren’t so sure that they want to be part of an organization with such a lack of stability. That really concerns me, because I can’t overcome that.” 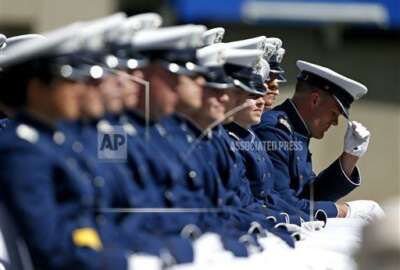