Iron is hot for Congress to act on DoD space programs, experts say

The time is ripe for Congress to force the Defense Department’s hand on reorganizing the fragmented leadership of its space endeavors, says a former deputy defense secretary.

“We’ve watched for 20 years where this has not come together,” John Hamre told the House Armed Services Subcommittee on Strategic Forces on Sept. 27. “Internally we’ve been fractured and it’s been hard to sustain a focus in the department. You are going to have to put pressure...

The time is ripe for Congress to force the Defense Department’s hand on reorganizing the fragmented leadership of its space endeavors, says a former deputy defense secretary.

“We’ve watched for 20 years where this has not come together,” John Hamre told the House Armed Services Subcommittee on Strategic Forces on Sept. 27. “Internally we’ve been fractured and it’s been hard to sustain a focus in the department. You are going to have to put pressure to do things right and you have an opportunity with a change of administration coming.”

Hamre suggested mandating changes DoD can make within a three-year window because that is roughly the tenure of a defense secretary. He also advocated Congress set goals in on an eight-year timeline, because it coincides with a two-term presidency, and past eight years for future presidents.

DoD has struggled with its space programs due to the splintered chain of command overseeing them. A July Government Accountability Office report stated most major space programs are undergoing significant cost and schedule increases.

That is partly due to the fact that the only real cross-department head over space acquisition is the defense secretary. There are eight areas within DoD that deal with space acquisition, including the National Reconnaissance Office and the Missile Systems Center.

“We and others have reported for over two decades that fragmentation and overlap in DOD space acquisition management and oversight have contributed to program delays and cancellations, cost increases, and inefficient operations… We identified approximately 60 stakeholder organizations across DOD, the Executive Office of the President, the Intelligence Community, and civilian agencies,” a July GAO update report stated.

Hamre said there are three areas where space programs need to come together and the only place they overlap is with the defense secretary.

Those three places are the organizing principle that recruits and trains people, the operational side and the strategic side.

DoD tried to alleviate its leadership problem last year by designating the Air Force secretary as the principal DoD space advisor (PDSA). That role is supported by an advisory body called the Defense Space Council and is responsible for promoting a unified approach to space issues, including acquisitions and overseeing the entire DOD space portfolio.

Still, Hamre is skeptical of DoD’s fix. He said it does not get to the question of core leadership at the top.

“My problem with [the PDSA] is the A, advisor, if the secretary of the Air Force is an advisor who’s in charge?” Rogers said. “It seems to me we’ve changed the title, we’ve moved the deck chairs on the ship, but we haven’t changed the direction of the ship.”

Then again, not all military experts agree with Hamre that Congress should stick its nose in department matters.

“The first thing you want to do is lay out for the department what the problem is and ask them to come up with a solution,” said Martin Faga former NRO director. “It probably won’t be adequate. Secondly, they will need legislation from [Congress] for powers they don’t currently have, but I think it starts with let [DoD] tell you what they need to do.”

James Ellis, former commander of U.S. Strategic Command said in his experience telling DoD what to do to fix a problem stifles creativity.

Instead, Congress should take the approach Ellis suggested.

That doesn’t mean that the former officials don’t have ideas on how they would fix the problem.

How to go about doing that exactly is up for debate.

One of the more popular options is to establish a space mission similar to the Missile Defense Agency.

That would make space its own component within DoD.

Another option is to elevate U.S. Space Command to a unified combatant command. That would be the easiest option, Hamre said. 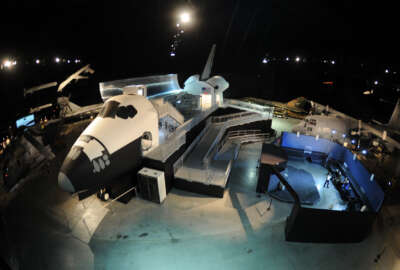