With only a few months left before his tenure as Defense secretary expires, Ashton Carter took one more step to drive home his oft-repeated point that the the Pentagon needs more “innovation” in its bloodstream, in case anyone has failed to take notice so far.

The yet-to-be-named innovation officer’s duties aren’t fully defined, but Carter said the position would serve as a direct adviser to the Secretary of Defense.

Among other things, he or she will be in charge of championing and implementing future recommendations from the innovation board, chaired by Google’s Eric Schmidt, which delivered its first set of informal interim recommendations last month.

“Those include building software platforms and human networks to enable workforce-driven innovation across DoD at scale, sponsoring innovation contests and tournaments, and providing training and education that promotes new ideas and approaches to collaboration, creativity, and critical thinking,” Carter said. “Many different organizations have recently embraced this position and also started to regularly run these kinds of innovation tournaments and competitions — including tech companies like IBM, Intel, and Google — and it’s time we did as well, to help incentivize our
people to come up with innovative ideas and approaches.”

He said he has decided to implement two of the board’s other interim ideas right away: Increasing DoD’s recruiting of computer scientists and spending more on machine learning technologies, though he offered few specifics.

As to the latter, he said the department will create a “virtual center of excellence” that lays out goals for new artificial intelligence breakthroughs and awards prize money to academic institutions and other U.S. organizations that manage to achieve them.

“Since this is an area where both the academy and commercial technology companies have been making significant strides, I’ve asked DIUx to pilot this approach by sponsoring an initial prize challenge focused on computer vision and machine learning,” he said.

Carter said the computer science hiring initiative will involve more “focus” on programs the department already has in place: they will would use the Reserve Officer Training Corps and the civilian Scholarship for Service program to make computer science a “core competency” in the military, he said, and institute personnel programs that emphasize ongoing development at all stages of a professional career.

“And for the first time in a long time, DoD’s personnel and readiness office has a real, proactive agenda — a concrete action plan to guide its efforts, so that they’re doing more than just being reactive, belatedly, to issues that crop up.”

Carter’s remarks came during a conference the Center for Strategic and International Studies hosted on the status of DoD’s third offset strategy, the department’s overarching plan to adjust its organizational structure so that it can rapidly absorb new technologies and adjust its warfighting concepts to stay ahead of potential adversaries, in some cases, by using existing weapons in different ways.

In that vein, Carter disclosed one new project the department’s somewhat-secretive Strategic Capabilities Office has been working on: modifications to the existing Army Tactical Missile System to give the Army the ability to hit targets both on land and at sea, in furtherance of battle concepts officials have been terming “cross-domain warfare.” (The new system is called ATACMS — pronounced, “Attack ’ems”).

“By integrating an existing seeker onto the front of the missile, they’re enabling it to hit moving targets,” he said. “Going forward, as these and other investments yield new weapons systems and warfighting capabilities in the coming years — some of them much sooner than you might think — they will need to be demonstrated so that they are effective in deterring future conflict. And it will be important to ensure they are allowed to run their course. We have to protect and integrate those concepts and ideas into our programs of record, rather than let them be uprooted just because they’re new.”

Frank Kendall, the undersecretary of Defense for acquisition, technology and logistics, said the next administration is likely to face major challenges on that front.

He said that while the third offset strategy has given the department permission to experiment with nontraditional warfighting approaches and prototype some new systems, none of that work has yet led to a significant modernization effort, primarily for budget reasons.

“All the things we’re doing amount to options for future administrations,” Kendall said. “We are not fielding capabilities, we are moving technology forward. We are giving operators a chance to try things out and keeping engineers employed doing cutting-edge things, all of which is good. But all of this is buying options that someone is going to have to fund, and that’s the problem. All of the things we’re doing with SCO and DIUx and in our labs and DARPA are to get us ready for development and production. Production takes money that we do not have, and that’s what keeps me awake at night.”

Indeed, Kendall said, the department is spending many more of its research and development dollars on  very early-stage experiments than on maturing new weapons systems to the point that they’re ready for large-scale fielding —  a reversal of the usual paradigm — and there are very few new products in DoD’s modernization pipeline.

“It’s right to do these things. It’s right to do demonstrations and get ready to provide options for future administrations,” he said. “But if we don’t get out from sequestration and get to reasonable budgets that are consistent with the commitments we’ve made around the world, we are not going to be able to field these capabilities.”

However, not all of the experimentation DoD has been conducting needs to wind up with brand-new platforms rolling off of traditional assembly lines.

Will Roper, the SCO’s director, offered the idea of swarming, miniaturized unmanned aircraft as an example.

The project aims to use commercially-available micro-drones, deployed from existing fighter jets to provide intelligence, surveillance and reconnaissance. Roper said that particular effort reached a major technological breakthrough in the past week, and that the department would have more news to offer in the very near future.

“We can build expendable [unmanned aerial vehicles] so that a lot of little things together can act as a big thing, and because it’s commercial technology, we can just kick it out of an aircraft and leave it behind,” Roper said. “Having a tactical aircraft that can put out a swarm of low-flying surveillance aircraft allows that fighter to perform missions it can’t do today. Instead of needing a Reaper or a Predator to provide ISR, I’ll just carry my ISR with me. I think those kinds of Frankenstein pairings of high-end and low-end capabilities are going to occur across all domains.” 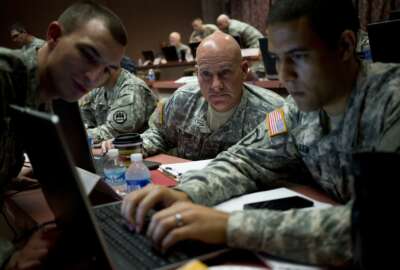