The annual Defense authorization bill Congress sent to President Barack Obama’s desk on Thursday will dramatically increase the role of the Pentagon’s youngest combat support agency. The Defense Health Agency will assume responsibility for managing the more than 400 military hospitals and clinics that are currently owned and operated by the Army, Navy and Air Force.

The change is set to take effect in October 2018 and represents the latest turn in a long-running debate over...

The annual Defense authorization bill Congress sent to President Barack Obama’s desk on Thursday will dramatically increase the role of the Pentagon’s youngest combat support agency. The Defense Health Agency will assume responsibility for managing the more than 400 military hospitals and clinics that are currently owned and operated by the Army, Navy and Air Force.

The change is set to take effect in October 2018 and represents the latest turn in a long-running debate over whether DoD should combine its health care operations in pursuit of cost efficiencies; past proposals have involved the creation of a single unified medical command on par with the rest of the military’s combatant commands.

The Senate had proposed a variation on that theme in its version of the National Defense Authorization Act. It would have fully abolished the military services’ medical departments and consolidated them within DHA, but the more modest House approach won out, moving only brick-and-mortar military treatment facilities (MTFs) to the joint agency.

“After careful study and deliberation, the conferees conclude that a single agency responsible for the administration of all MTFs would best improve and sustain operational medical force readiness and the medical readiness of the armed forces, improve beneficiaries’ access to care and the experience of care, improve health outcomes, and lower the total management cost of the military health system,” lawmakers wrote in a report describing the House-Senate compromise. “The current organizational structure — essentially three separate health systems each managed by one of the three services — paralyzes rapid decision-making and stifles innovation in producing a modern health care delivery system.”

DHA’s initial creation, in 2013, was itself a compromise between congressional advocates of health care consolidation and those that believed the military services each had unique needs that justified separate medical establishments. Since its standup, its headquarters in Falls Church, Virginia has been in charge of delivering a menu of shared services like information technology, procurement and facility support.

It does have some experience managing hospitals: DHA already runs the Walter Reed National Military Medical Center in Bethesda, Maryland, and Fort Belvoir Community Hospital in the Virginia suburbs of Washington, but the NDAA will almost certainly cause the agency to grow as it expands that portfolio to absorb the rest of the military services’ MTFs.

Indeed, the bill orders DHA’s director — a three-star military officer — to create a new professional staff structure within DHA, led by a civilian assistant director who has “significant” experience running a large hospital system in the civilian sector.

Below that position, the legislation specifically prescribes four deputy assistant directors, one each in charge of information technology, financial operations, health care operations and medical affairs. DHA would also be in charge of a new Joint Trauma System to improve care for severely wounded warriors.

The bill does not abolish the positions of the three military services’ surgeons general — each of whom are also three-star officers — but it does leave their remaining roles unclear and orders the Pentagon to deliver a report on what their future duties will be.

The MTF reorganization was one of several changes Congress made to the military health care system in this year’s sweeping Defense authorization bill. The White House has not signaled whether President Obama will sign the legislation, but it passed both the House and Senate by margins that could easily override a veto.

“These reforms constitute an important first step in an evolution of the Military Health System,” Sen. John McCain (R-Ariz.), the chairman of the Senate Armed Services Committee, said in floor remarks just before the Senate voted 92-7 to pass the bill Thursday. “It will help turn it from an underperforming, disjointed health system into a high-performing integrated health system that gives beneficiaries what they need and deserve: the right care, in the right time, at the right place.”

Another section of the bill makes tweaks to the TRICARE system, DoD’s managed care plan for military members, their families and military retirees. Notably, the changes would increase the share working-age retirees pay for their medical care, a request the Defense Department has been making of Congress for the past several years.

It replaces the current TRICARE Standard and Extra programs with a new one called TRICARE Select, a “self-managed” preferred provider option in which beneficiaries will be able to choose their own doctors, but requires new annual fees for retirees of up to $900 per year for family coverage and deductibles of up to $600.

The existing TRICARE Prime program, DoD’s HMO-like managed care option, would be largely unchanged, but retirees would pay enrollment fees of $700 per year for family coverage and would also see increased co-pays for services ranging from emergency room visits to routine outpatient care from civilian providers in the TRICARE network.

The enrollment fees will escalate each year, just as under the current health plans, but just as under current law, active duty members and their families would be exempt from those fees.

The final bill also orders DoD to implement “value-based incentives” and to lean toward “high-value providers” in any future TRICARE contracts in an effort to get the most bang for the military’s $50 billion health budget as possible. But somewhat paradoxically, it takes the authority to negotiate those contracts away from DHA and places them within the authority of the undersecretary of Defense for acquisition, technology and logistics — a position Congress completely eliminated in another section of bill.

The provision seemed to ignore the fact that DoD awarded its most recent round of TRICARE contracts in July and successfully battled back nine bid protests in short order — though that hasn’t been the case in prior TRICARE rounds.

In any case, the department is already in the process of implementing the awards, which won’t be recompeted for several more years.

Vice Adm. Raquel Bono, DHA’s current director, said the agency has already begun discussions on how to implement value-based services with the vendors it selected for the new TRICARE East and West regions: Humana and Health Net, respectively. Kickoff meetings with those contractors began this week.

“We feel very confident with the groundwork we’re laying with our new partners,” she said in a recent interview with Federal News Radio. “In the statements of work for these contracts, we were really looking at what a value-based system would look like and how we create shared risk between the contractors, the patients and the DHA to help manage the cost of care. We’re trying to concentrate our payments on actual health outcomes, quality and safety.” 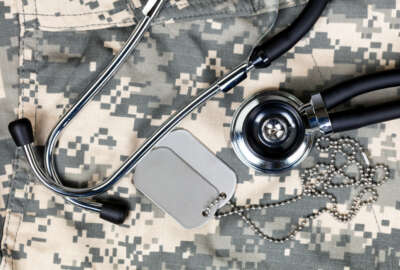