Officials tasked with protecting federal buildings have written up playbooks to deal with physical and cyber threats. But the coronavirus pandemic raised new challenges for members of a governmentwide security council.

With agencies reopening office buildings or setting a timeline for doing so, the Interagency Security Committee, now part of the Cybersecurity and Infrastructure Security Agency, is looking at ways to ensure a safe return of employees and visitors to federal buildings.

Officials tasked with protecting federal buildings have written up playbooks to deal with physical and cyber threats. But the coronavirus pandemic raised new challenges for members of a governmentwide security council.

With agencies reopening office buildings or setting a timeline for doing so, the Interagency Security Committee, now part of the Cybersecurity and Infrastructure Security Agency, is looking at ways to ensure a safe return of employees and visitors to federal buildings.

ISC Chief Daryle Hernandez said subcommittees have looked into, for example, whether agencies can use their closed-circuit security footage or their physical access control system (PACS) to assist in contact tracing efforts, if an employee or visitor tests positive for coronavirus.

Hernandez said members have also looked into some “low-tech” solutions, such as moving away from reusable plastic trays at security checkpoints at federal building entrances and instead providing plastic bags for people to run their personal items through security.

While the General Services Administration’s Public Buildings Service helped set the stage for reopening facilities as the government’s landlord, decisions about the operations of a specific building often fall on its facility security committee, which reports back to the ISC.

Facility security committees include representatives from all tenant agencies, as well as security personnel and the building’s ownership.

The ISC, which now counts 64 agencies as members, dates back to a 1995 executive order signed by President Bill Clinton in the aftermath of the bombing of the federal building in Oklahoma City.

In recent years, the number of violent incidents at federal buildings has heightened the profile of federal security efforts.

A gunman, for example, opened fire outside the Earle Cabell Federal Building last year, but was shot and killed after an exchange of gunfire with Federal Protective Service officers.

More recently a gunman killed two Federal Protective Service officers on May 29 in Oakland, California outside a federal courthouse.

“Over the last several days, the Federal Protective Service has experienced an unprecedented level of threats and attacks against federal facilities,” the agency said a statement last week. “In response to ongoing civil unrest, the Federal Protective Service has enhanced its law enforcement presence and taken a number of precautions at those protected facilities, and are standing with our state, local and federal partners to protect the safety of our Federal workforce, critical infrastructure, and federal property in light of these demonstrations and direct threats.”

CISA’s Assistant Secretary for Infrastructure Protection Brian Harrell said recent events have shown agencies need to be prepared for the “worst-case scenario” when drawing up security plans for federal buildings.

“Things look mighty clear when we look in the rearview mirror. We need to ensure that we are paying attention to the past, but we are also looking to the future, and we are trying to anticipate what those security issues are on the horizon,” Harrell said last Monday at the SIA conference.

The ISC in April released guidance on how critical infrastructure sectors should keeping operations centers and control rooms running during the pandemic. Meanwhile, the committee expects to release updated guidance in August on the threat of unmanned aerial systems.

Last year, the ISC ran its first year of compliance reporting of its members, and found that members demonstrated what Hernandez described as “good compliance with the risk management process,” but also highlighted some gaps.

“They are not following through on developing a plan, they’re not rehearsing response and taking other necessary measures to be prepared for an active-shooter event,” he said.

While the ISC seeks to improve communications between field offices and headquarters, the committee is rolling out virtual education opportunities.

Because of the coronavirus, the ISC has canceled all instructor-led training through August, but the agency is piloting instructor-led virtual training on the same topics that will include practical exercises.

In addition to housing the ISC, CISA employs 119 protective security advisers that operate in every U.S. state and territory. Harrell described them as senior-level career employees that take an on-the-ground look at security practices.

“These are GS-13, 14, 15, very seasoned government officials that reside where you do in the field — where you eat, breathe, reside. They know the local politics, they know the local concerns they have the relationships with local first responders,” he said. 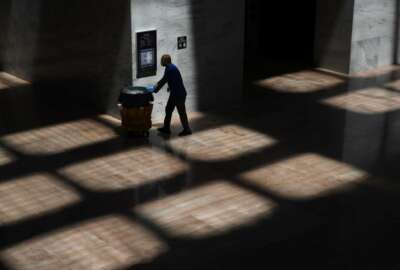 Let’s talk about those reopening plans