At DLA, that requires answering four questions, said Rowlands, the agency’s AI strategic officer, while speaking on an AI implementation panel convened by Federal News Network and Noblis: “Do we have the data in place? Do we have the infrastructure and tools? Do we have the experts in the data scientists to...

Chief Data Scientist and Director of the Innovation Lab, GAO

We’re seeing a readiness to adopt and experiment with AI. I think a lot of it comes down to pilots, getting a few base hits here, here and there … starting small and then branching out from there.

At DLA, that requires answering four questions, said Rowlands, the agency’s AI strategic officer, while speaking on an AI implementation panel convened by Federal News Network and Noblis: “Do we have the data in place? Do we have the infrastructure and tools? Do we have the experts in the data scientists to facilitate these projects? And do we have that governance structure?”

In a separate discussion, we covered how to prepare for AI projects. Read more in this article, “AI success starts long before you apply data to an algorithm.” In this second discussion, our panelists talked about how, having done the groundwork, agencies can best go about implementing their AI plans.

For AI, start small and scale up

Rowlands cautioned against comparing federal and commercial applications in similar domains too closely. DLA staff do consider other large-scale distributors of multiple items, such as major retailers, he said, but added that a big difference is the risk tolerance.

“If Walmart runs out of toilet paper, it’s no biggie. If a warfighter runs out of the critical part, that’s a different problem,” Rowlands said.

Because demand patterns from DLA’s armed forced customers can be difficult to predict, risk mitigation is an important element in its AI projects, he said. Mitigating risk, in turn, calls for an iterative approach to AI, deploying quickly but also making adjustments quickly.

“Whatever projects we want to take on in the future, we can get through that pipeline quickly, we can iterate, we can experiment,” Rowlands said. “And we can learn, more importantly, from what we’ve done in the past.”

AI pilots are a good way to proceed, advised Chris Barnett, chief technology officer at Noblis. He said he sees that approach often across government. Pilots often center on the application of AI or automation in making a particular job function more efficient.

Equally important to implementation is having complete data. Sometimes, for training algorithms, data gaps may exist. If so, agencies should consider using synthetically generated data, recommended Taka Ariga, chief data scientist and director of the Innovation Lab at the Government Accountability Office.

Synthetic data can help steer an algorithm away from biases that can creep in, Ariga said. GAO has used synthetic data to model outcomes of different financial controls on the stubborn problem of improper payments, for instance.

AI that’s both for and about people

Success in implementing AI initiatives, not surprisingly, relies on people in a couple of ways. All the panelists agreed that agencies view AI as an enabler rather than a technology that will replace federal employees. The goal typically is to free up people’s time so they can do less routine work and instead focus on high-level analysis and planning.

“How can we augment the humans so that the work they’re doing is faster, and [we’re] reducing some of the burden,” said Rajiv Uppal, chief information officer at the Centers for Medicare & Medicaid Services.

As an example, he cited the months-long, laborious process of documenting security controls pursuant to obtaining authorities to operate (ATOs) for new software programs. CMS is experimenting with natural language processing, applying it to the database of controls as a way of removing some of the burden, Uppal said.

Implementation success also depends on having staff members with sufficient AI skills, Uppal said. “We have a workforce upscaling program that we call workforce resilience,” he said. “We offer many tracks for our staff to get upskilled on human-centered design, which is an important component of how we do things.” There are other tracks that focus on data science and product management.

GAO’s Ariga said people dealing with AI must understand how to deal with results that typically are nonbinary. “What comes out of AI typically is probabilistic. So how do you interpret a 67% likelihood of something happening? How do you narrate that conversation?” he said.

Still, if an agency has established a strong AI ecosystem and then uses iterative, agile approaches to deploying it, it should be able to both audit and trust the outcomes, even if algorithms do have black box characteristics, Ariga said.

Barnett made an analogy to human intelligence. “You can’t see neurons functioning, but you can, over time, see the outcomes,” he said. “And to me, that provides validation that the system is working.”

Listen to part 2 of the show: 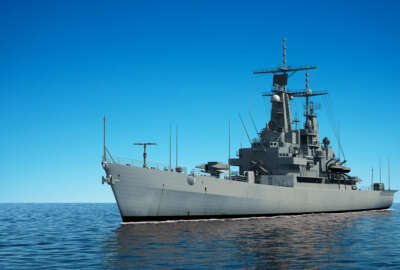 Science, technology and doctrine come together in Navy’s program for unmanned surface vessels 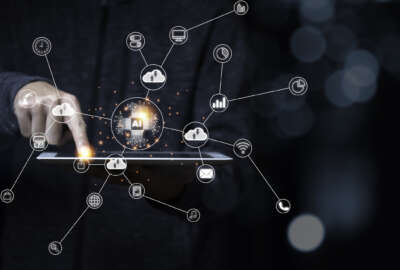 Jesse Rowlands is the Artificial Intelligence Strategic Officer for the Defense Logistics Agency. He is the principal advisor and strategist for DLA’s AI program. He is responsible for AI strategy that integrates AI across the enterprise in a safe and ethical manner.

Mr. Rowlands previous experience includes data science, financial modeling, and audit and investigations. He holds an MBA from the University of South Dakota and a Graduate Certificate in Data Mining from Stanford University.

Visionary Technology Executive with 25+ years of experience in enterprise software development, managing products from concept to launch, overseeing technology, design and architecture of web development tools and optimization platforms utilized by industry leaders. I am well versed in Agile Software Development methodology as well all aspects of start-up operations including staff recruitment, customer and corporate acquisition, and have successfully promoted cohesion and profitability during critical and transitional organizational periods.

Over the course of my career, I have fostered highly effective leadership teams and developed relationships with major investors including venture capital firms, government entities and Fortune 500 companies, and have created multiple platforms acquired by industry leaders such as IBM.

Taka Ariga is GAO’s first Chief Data Scientist and Director of the Innovation Lab. As an integral part of the Science, Technology Assessment, and Analytics team, he will help GAO develop and implement advanced analytical capabilities for its auditing practices. Prior to joining GAO, he held executive positions at Deloitte, Ernst & Young, and Booz Allen Hamilton, where he worked with audit, compliance, legal, and regulated entities.

Taka earned a bachelor’s degree in computer engineering from Johns Hopkins University. He is natively fluent in both Japanese and Mandarin Chinese. In his spare time, Taka is a serious amateur classical chamber musician (performing on cello throughout the Washington DC region), as well as a competitive tennis player.

As Chief Technology Officer, Mr. Barnett leads the strategy, direction, and management of Noblis’ technology, labs, patent portfolio and innovation programs. Notably, he serves as sponsor of the Noblis Centers of Excellence, Noblis’ cross-company Centers that bring experts together from across missions, domains, and backgrounds, and the Noblis Sponsored Research (NSR) program, Noblis’ yearly investment in client-centered research and development challenges.

Barnett has decades of experience advising, leading, and transforming organizations in the Department of Defense, Intelligence Community, Federal Civilian Agencies, and the private sector. In addition to a wealth of experience in technology strategy, Barnett also brings a strong background in cyber security operations, security architecture, and National Security policy to his role at Noblis.

Prior to joining Noblis, Barnett held a number of leadership positions in the defense, intelligence, and federal civilian markets. Most recently, he served as Vice President of Technology and Chief Technology Officer (CTO) of the Intelligence and Homeland Security Division at General Dynamics Information Technology (GDIT).

Mr. Barnett has a Master of Business Administration from the University of Virginia, a Masters of Science in Information Technology from George Washington University, and a Bachelors of Arts in Economics from Ohio University.