Humanitarian groups often swoop in around the world to help people hit by natural disasters. Now the U.S. Agency for International Development has launched a program to see if people can be saved before disasters. It’s funding a consortium of seven universities around the world to explore the possibilities. Joining the Federal Drive with Tom Temin for...

Humanitarian groups often swoop in around the world to help people hit by natural disasters. Now the U.S. Agency for International Development has launched a program to see if people can be saved before disasters. It’s funding a consortium of seven universities around the world to explore the possibilities. Joining the Federal Drive with Tom Temin for details, from USAID’s Bureau of Humanitarian Assistance, the acting division chief for private sector engagement, diaspora and innovation Maggie Schmitz.

Tom Temin: Ms. Schmitz, good to have you.

Maggie Schmitz: Thank you, Tom, for having me this morning.

Tom Temin: Well tell us about the aims of this program. Because I guess I’m puzzled by how you can save people before the disaster because they’re already alive still.

Maggie Schmitz: We’ve all seen over the past several years that extreme weather events are increasing both with in terms of intensity and with frequency. So there’s going to be more and more demand for humanitarian actors to react around the world. And in order to increase the effectiveness of humanitarian assistance, what agencies need to do is to implement the most effective early action at the right time and at the right place. And what we’re talking about with this project, it’s called anticipatory action, or action that is taken before a predictable disaster in order to mitigate the disaster’s impact. And with anticipatory action, it’s a relatively new concept within humanitarian aid. But there is not a lot of data that demonstrates both what is effective and what is cost effective. So if we know what sort of actions can be taken before a predictable disaster, like a drought or flood or a hurricane that we know is coming, or rising, or happens on an ongoing basis, then we will be able to invest in these actions in order to reduce suffering and save lives.

Tom Temin: So the purpose of the academic, I guess, these are grants, would that be fair to say? That they’re going to explore what the possibilities are for different classes of disasters?

Maggie Schmitz: Yes, so this is one project. It is a consortium of seven universities around the world. It’s headed by the Feinstein International Center at Tufts. And then there’s six other universities around the world — Bangladesh, Uganda, Lesotho, Mozambique, Namibia and the Philippines. And there are two tracks to this program. One is looking at actual events that take place, and that actual actions that were taken before the onset of a disaster. And this is already happening. We kicked off the program in late 2021. But already this project is looking at actions that were taken in eastern Africa as a result of the failure of a rainy season in eastern Africa. So right now, there are survey teams going out collecting the data, and they will analyze the information to say those early actions that were taken in anticipation of the failure of the rainy season, what impact if any did those actions have, and what is the most impactful of those actions. So that is the one track where they’re working with actual events that take place. The second track — and this is really where the academic level kicks in — is that each university is heading up a specific topic with regards to anticipatory action and humanitarian action. And that includes what is the impact of nutritional interventions with regards to flooding, or, you know, how heat waves affect urban residents, or how effective is forecast-based financing when it comes to typhoons. So that will be the ongoing research taking place over the next two years, in addition to the actual impact evaluations of actual events. And then throughout this entire two-year project, the universities will be writing up their research, engaging with the academic community and the humanitarian community overall across the world, and hopefully building the evidence base to what works and what doesn’t.

Tom Temin: We’re speaking with Maggie Schmitz. She’s the acting division chief for Private Sector Engagement, Diaspora and Innovation at the U.S. Agency for International Development. And just to try to put some solidity to this, do you have any ideas? Are there any possibilities that you know of? To go back to the example of a drought, and that could cause a crop failure, so I guess hunger is the actual effect you’re trying to stave off. Is there any possibilities that you’re aware of that could be developed into real action plans, such as getting grain there sooner or moving people to different areas?

Maggie Schmitz: So a lot of what anticipatory action also does is look at how to make people more resilient to natural disasters. And like you said, the example of drought or flooding, some of it we’ll look at that agricultural practices. You know, are there different sorts of seeds or inputs or fertilizers that can be put into the system that will help people be able to withstand the impact of drought? Some of it will also be, again, like nutritional impact, and whether pre-positioning nutritional supplies for families the most vulnerable before a drought or before flooding takes place. And it’s always better to anticipate and do something before something happens, because that will allow you to reach the most vulnerable before there is an emergency.

Tom Temin: Sure. So at some point, the academic institutions around the world will come up with lots of great ideas. What’s your plan to operationalize them? Because USAID works with nonprofits and local organizations on the ground in the countries where it operates. And so whatever the universities come up with has to be learned and acted on by those organizations themselves that actually do the work. So do you have a way of making sure that the intellectual property that comes from the colleges translates to what the organizations of USAID actually do?

Maggie Schmitz: Yeah, that is a great question. And one of the great things about this proposal is that it actually plays into the networks and the platforms that all of these eight agencies do. So they’re working not only with each other on the academic level, but they’re working with specific UN agencies. And that is the example that I cited in eastern Africa. And the failure of the rain season — that is directly working with one of the UN agencies. And part of the academic research and presentation of the findings is taking place on global platforms around anticipatory action, where it’s not just the researchers. It is the UN agencies; it is the very large international NGOs who are part of this, as well as USAID and other donors. So it’s very much hand-in-hand with the people who are actually on the ground implementing these initiatives.

Tom Temin: And does it translate as far back as the people themselves? For example, better or more modern agriculture techniques that might yield better in a famine or anticipate a famine or different housing and construction codes for places that have floods? That kind of thing?

Maggie Schmitz: Yes, absolutely. Our partners on the ground worked with households directly, you know, training them on different agricultural techniques or working them to make sure they have access to markets for their goods. We work hand-in-hand with local authorities on building codes or developing policies. We’ve done a lot of work in working with municipal, state, national governments, in developing their emergency response systems during training, all of that.

Tom Temin: And what about the idea of preparing people in anticipation of, let’s say, social or political upheaval? Because some of the most horrible effects we’ve seen in Africa have been because of what people do to other people, and not droughts and famines and floods and so forth. And is that part of research?

Maggie Schmitz: Right now, it isn’t much of it. A lot of the research that is involved in this project has to do with climate change. And a lot of what anticipatory action is, is based on actions taken on predictable events. And of course, you can predict, in many cases, disasters that will happen because of state decisions or political conflicts. But in this case, a lot of the work that is being done is natural disasters.

Tom Temin: Yes, it’s too bad there’s no antidote against the horrible economic decisions of bad leaders around the world. I guess that’s beyond the scope of USAID at this point. And so what is your timeline here? Do you tell each university we need six ideas in less than 10,000 words by next October? How does this look as a program?

Maggie Schmitz: So the topics were already decided. They’re already known; research is already beginning. There are six different topics that these six universities around the world are leading the research on. And this is a two-year project. And there are targets for the research to be presented on international floor for peer review and discussion. And again, like I mentioned, these different platforms within the humanitarian community, there will be that feedback and that given take.

Tom Temin: Maggie Schmitz is acting Division Chief for private sector engagement, diaspora and Innovation at the U.S. Agency for International Development. That’s part of the Bureau of humanitarian assistance. Thanks so much for joining me.

Maggie Schmitz: Thank you very much, Tom. I appreciate the conversation. 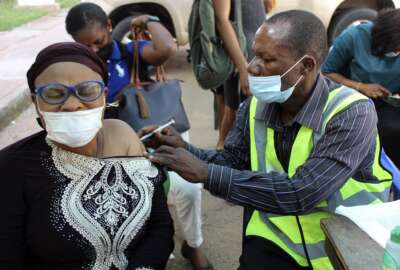 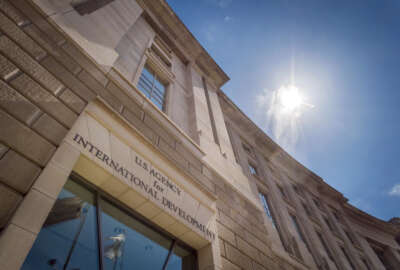