Health insurance: Shop from home or the office!

Tens of thousands of federal employees are being paid while they spend time shopping — at the office or at home — via a special online service that the government also pays for. Outrageous, right? Another boondoggle. So has Uncle Sam lost his mind? Again. Or is this crazy-like-a-fox behavior?

Actually, there is a reason which taxpayers should applaud. And also envy because odds are their company’s don’t offer any such benefit.

Tens of thousands of federal employees are being paid while they spend time shopping — at the office or at home — via a special online service that the government also pays for. Outrageous, right? Another boondoggle. So has Uncle Sam lost his mind? Again. Or is this crazy-like-a-fox behavior?

Actually, there is a reason which taxpayers should applaud. And also envy because odds are their company’s don’t offer any such benefit.

When most private sector workers reach age 65 or retire, they lose their company-backed health insurance. Period. It’s Medicare or a supplemental plan (if they can get coverage) which they pay for. No benefits, no premium subsidies for retirees or spouses.

By contrast, federal agencies pay the lion’s share of their employee/retirees health plan premium. The government share, the amount you don’t have to pay, is anywhere between 70-to-75%. That’s a lot. And that percentage stays constant each year. The government/taxpayers still pick up most of the tab for premiums feds, postal workers and retirees pay. As a result, an increasing number of federal agencies now subscribing to an online shopping service that lets individuals compare plans, check doctor networks and consider year-to-year changes among the hundreds of health plans that are part of the Federal Employee Health Benefits Program. The open enrollment period for the insurance giant run through mid-December. And experts say that many people, perhaps as many as 30%, could save $1,000 to $2,000 in premiums next year if they picked a similar, but less expensive plan. Which is where the shopping guide comes in. The Office of Personnel Management has an excellent online system that helps employees and retirees shop. It shows premiums. But it doesn’t go into detail over benefits or rank and rate plans like the Consumers Checkbook program. It also lets individuals check to be sure their favorite doctors will be within the networks of insurance plans they are considering.

Because federal agencies and taxpayers pay the major portion of employee/retiree health premiums, it saves the government and you money if employees shop carefully. Get the best coverage at the lowest premium. And find a plan with a cost-to-you catastrophic limit in case the worker, retiree, spouse or kids have a major medical emergency next year. Given that we are the midst of a once-in-a-lifetime pandemic, catastrophic coverage — the maximum amount you will be out of pocket in a worst case scenario next year — that is the top consideration for most insurance shoppers.

So agencies are probably saving taxpayers a bundle by paying for the online, at work, shopping service. Among those that do pay for employees (and remarkably for retirees too) is the U.S. Postal Service. That’s particularly important because the USPS pays about 70% of the total health premium for workers, thanks to a very smart union contract. Lots of other “smart” agencies have made the decision that they can save money IF they encourage workers to shop around. USPS doing it for retirees is a step beyond being smart. If people use it.

So what other agencies, with reputations for being smart, pay for the shopping service for their workers? A number of federal courts subscribe for their people. So do many Department of Defense components, and the Departments of Labor, Education, Health and Human Services, as well as many units of the Justice Department. Also the FAA, the State Department, Federal Reserve Board, Government Accountability Office, the GPO, National Science Foundation, SEC, Peace Corps, the Office of Personnel Management, Patent and Trademark Office and the U.S. House of Representatives. Members of the National Treasury Employees Union, Professional Managers Association and the Federal Retirement Thrift Investment Board, the folks who run your Thrift Savings Plan program. Some smart people in that lineup.

So how to know if your agency has subscribed for you? Click here.

How’s your life/wife? Compared to what? 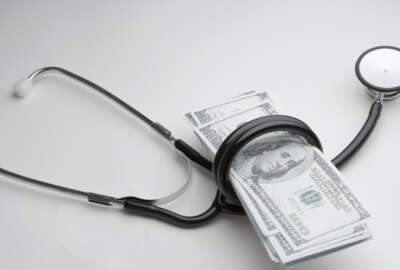 Does your health plan pass the BS test?

Will your home office survive the pandemic?