The Navy has just wrapped up what it says is the largest cloud computing migration its history and one of the largest in North America, marking one of the first times the Defense Department has successfully transitioned a major business IT system to a commercial cloud environment.

Navy ERP, one of the large Defense enterprise resource planning...

The Navy has just wrapped up what it says is the largest cloud computing migration its history and one of the largest in North America, marking one of the first times the Defense Department has successfully transitioned a major business IT system to a commercial cloud environment.

Navy ERP, one of the large Defense enterprise resource planning systems, which tracks nearly $70 billion in financial transactions each year, went live in the cloud on Monday. Officials said it was part of a larger modernization project that also included a major technical refresh and an overhaul of many of the service’s business processes.

The transition from a government-owned Navy enterprise data center to Amazon Web Services’ GovCloud took about 10 months, but given the project’s complexity, officials originally expected it to take twice that long, said James Guerts, the assistant secretary of the Navy for research, development and acquisition.

“Quite frankly, we thought it would take us 20 months, but we really challenged the team to think differently: Don’t do business as usual in how we award contracts, don’t do business usual in how we a cyber check the contracts, don’t just go a traditional partner, look for the performers,” he told reporters Friday. “And this was a key element of the overall business transformation plan we’re trying to do in the Department and Navy. As we rig for speed in the operational force, we’ve also got to rig for speed on the back office support element. Because if we don’t get the back office piece right, we will not be able to act with the urgency and the agility we need to support folks in the field.”

The work is part of a $100 million contract the Navy awarded last year via the General Services Administration. The prime vendor is a small business called Advanced Solutions Incorporated; the Navy said that firm worked with larger partners to handle the transition to Amazon’s GovCloud.

And officials say there are clear business and mission reasons to put Navy ERP in the cloud. It already handles about half of the Navy and Marine Corps’ financial and logistics transactions each year, and has more than 60,000 users.  But as of now, the Navy has nine separate general ledger systems. Almost all of the rest are much older, and rely on outdated programming languages like COBOL. 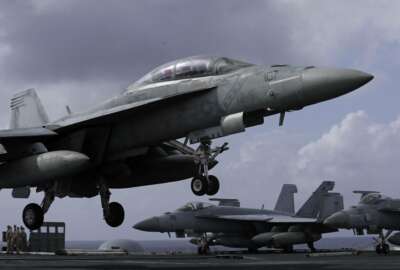 DoD CIO tries to correct JEDI facts, but may have opened new front for scrutiny

Besides being costly and slow to operate and maintain, the fragmented nature of those systems is also a major barrier to the Navy’s audit readiness, said Thomas Harker, the assistant secretary of the Navy for financial management.

“The migration of the other general ledgers will increase our visibility into the data. Right now for us to go through financial reporting or any data analytics, we have to pull data from nine different systems, not all of which are configured the same, slice it and dice it and put it all together. It creates challenges for financial reporting. It also creates any challenges in doing advanced analytics around that data,” he said. “We have reports that were taking five, six hours to run, and we can now do them in 30 minutes, and I expect an incredible increase in speed across the board as people are entering contracts, entering invoices, managing the whole budget execution process.”

Some of the consolidation work is already on the near-term road map. First, the Navy plans to tackle several of the separate systems that track transactions in its working capital funds. The first of six of those is scheduled to transition in October, and the last is set to move about a year later. Once that’s done, the rest of the activity in the Navy’s general fund will start moving to the cloud-hosted ERP. That will take longer: officials don’t expect to finish until 2022.

The Navy expects to see immediate cybersecurity benefits as well, not just because the system is in the cloud, but because it will be protecting one financial system instead of nine.

I think it’s a widely accepted practice that you can move from many disparate systems that you’ve got to independently always be checking and protecting and dealing with vulnerabilities, and get that into a more coherent single system, that reduces the attack surface and allows you to much more efficiently ensure that you’re always keeping that infrastructure up to date,” Guerts said. “And the fact that it’s cloud-based, that kind of comes with the cloud provider. The government isn’t having to do all this tailor-made cyber activity that we have to do when you have a hardware infrastructure on its own, and in a bunch of disparate systems.”

Not waiting for JEDI

Navy officials think the ERP migration has already started to serve as a sort of pathfinder for how to move large Defense IT systems to cloud environments. It is, for example, the first time the Navy has used the Defense Information Systems Agency’s cloud access point to move data between government networks and commercial cloud facilities.

The Pentagon is aiming for large cloud migrations on a departmentwide scale through its JEDI contract, but that project has been held up, first by bid protests, and now by a new review by Defense Secretary Mark Esper.

But the Navy has made clear for months that it doesn’t intend to let the wait for JEDI hold it back from large-scale cloud migrations. It’s also working on a project to consolidate nine separate manpower and personnel databases into a single authoritative data source. And at least until JEDI is ready, the plan is to put those systems in Amazon’s GovCloud as well.

But Guerts says that doesn’t necessarily mean they’ll stay there.

“I think once you convert your architecture to a cloud-based architecture, the cloud provider becomes a lot less of a challenge,” he said. “And if you’ve got a hard-wired, non cloud-based app and you’ve taken this fairly large step, that sets us up to then put those applications and data on wherever the cloud provider is coming from. It kind of decouples the application and from the infrastructure and gives us a lot more flexibility as we go forward, whether it’s JEDI, or whatever other cloud based system we decided to ride on.”