The after-effects of the Navy’s ship collisions

Years after highly visible, peace-time collisions of ships in the Navy’s 7th Fleet, the ships are repaired and back in service. But sailors who may be experiencing post traumatic stress disorder, they aren’t fixed so easily. ProPublica’s reporter Megan Rose has investigated this episode extensively and spoke with the Federal Drive with Tom Temin about what she found.

Tom Temin: Ms. Rose, good to have you on.

Megan Rose: Thanks for having me.

Tom Temin: And you have looked into the Navy’s response to people that might be suffering from post traumatic stress disorder in these incidents. And I guess, first of all, let’s start with the cause of the stress. What happened inside the ships, I guess, is far more horrifying than people may realize from just the fact of two ships hull to hull.

Megan Rose: There were two collisions, and in the first one the USS Fitzgerald, a civilian ship, basically cleaved into the side and created a gapping hole, and the ship rapidly flooded. And this happened where men were sleeping. And so they were woken in the middle of the night to water rapidly coming up their bunks and having been jarred and trying to swim up through a pretty small, like, porthole in order to get out. And in the case of the USS Fitzgerald, seven sailors did not make it. And then the same thing happened again two months later with USS McCain and 10 sailors drowned. So we’ll have the groups of sailors who were in these berthing compartments trying to escape with their lives, which was obviously very traumatic, and then also the other couple 100 sailors on the ship just dealing with this catastrophic event and trying to save the ship and get them to shore. It had some long term effects for people.

Tom Temin: You’re reporting that the Navy is not ignoring the issue. But the response that it created to post-traumatic stress disorder in this case is uneven, and not everyone is availing themselves of the help that’s available.

Megan Rose: The two crashes affected, you know, upwards of 550 sailors, which is a really large group of people that could potentially be affected by these traumatic events and need help with post-traumatic stress disorder. So that is a challenge in of itself, for maybe how exactly do you tackle this problem? And so they started with some proactive things of trying to get doctors on the ground immediately to be there for the sailors and to track them over time and check in at six blunts and then a year to make sure people weren’t being missed. But unfortunately, sailors still were missed in this whole process, and part of the problem was that in the 7th Fleet were both of these crashes happened, which is out in the Pacific and most of the ships are based in Japan, they’re chronically short of sailors. And so when the Fitzgerald and the McCain that were out of commission, the Navy made a strategic manning decision to take those sailors and fill gaps on other ships. So that was taken from policy side, a warfighting side that didn’t necessarily take into account what effect that would have on their mental state. So many of these sailors who barely escaped from their lives from these berthing compartments on her destroyer are then put on a new destroyer sleeping in the same bunks. And as you can imagine, that did not go over well for many guys. In fact some of them couldn’t sleep at all in those same bunks, and were setting up hammocks in the armory. This is not a hospitable place to sleep — a place on the ship where they keep guns, but they felt more comfortable there than in these bunks. And so what happened was, even though the Navy was trying to be sympathetic, these folks were essentially retraumatized by what happened.

Tom Temin: We’re speaking with Megan Rose. She’s a reporter with ProPublica. And describe Project Orion in a little bit more detail. This was the Navy’s formal response program to the sailors that survived.

Megan Rose: Yes, so the Navy, in trying to deal with all of these sailors and get people assessed and help if they needed it, they started this pilot program called Project Orion, in which they would actively reach out to the sailor. So one thing that we have learned since the Iraq and Afghanistan wars is that having service members self-refer themselves for mental health help just doesn’t work. It’s just doesn’t fit with their culture and who they are. They often will rather tamp it down. So Project Orion was set up to check in with each and every sailor, and they spent thousands of hours and tons of emails and calls trying to reach out to the sailors asking, “Are you okay? Are you, have you received mental care, do you need it? Do you want us to connect with them?” And the Navy reports that they were able to reach about two-thirds of the sailors, and about 20% of those sailors then did ask for help. And then the project went for a year and, you know, they had some success in getting people into care. Although sailors also told us that sometimes they didn’t hear back from Project Orion. Or they were confused by these calls that came out of the blue with people asking them very personal questions. And so it seems like Navy has some learning process to do in sense of making sailors aware of what the project is ahead of time, so they’re not caught off guard.

Tom Temin: And you’ve got some pretty lurid detail in the story. There was one case where one of the sailors, who was suffering from PTSD, the ship lurched for some normal reason and sent a chair scraping across the floor, and that took him right back to the original crash.

Megan Rose: Yeah, he found himself so panicked by the sound because, as you could imagine, when a oil tanker and destroyer collide that steel-on-steel screech is really distinctive and very loud. And so when this sailor heard that chair going across the floor, it brought him right back to the crash. And he actually peed his pants he was so panicked in that moment.

Tom Temin: And so now, three years on or so, and Project Orion, I guess, probably is wrapped up from the Navy standpoint, what is the status of those sailors now and is there any hope for continued help or initial help for those that didn’t take advantage the first time around?

Megan Rose: Yeah, so at this point in time, there are still group therapy sessions that are going on around the world with Fitzgerald and McCain sailors so they can go and talk to people who really understand. So they don’t have to be in a group in which, you know, it might be a sexual assault trauma or combat injury that people are coping  with, and they’re just among their very distinctive peers. So there are those things that are available to them. And then the Navy is no longer reaching out directly to these sailors, and so they do have to take it upon themselves to get help and we have heard some mixed results of people doing that, going to bases and having a lot of wait time or, one sailor told us he went and he did the whole kind of exhausting exercise of explaining his trauma, expecting to get a follow-up. And his records were lost and they had no idea that he had been there. He said he had to go through this whole thing again to get help. So it has been hit or miss. But there is a robust mental health program with the Navy on all these bases. It’s just getting access to it, getting it in a timely manner that’s been a little troublesome for some guys.

Tom Temin: Maybe the sub theme here, too, is that even though these were crashes in peace time and just whatever reasons, there’s many causes — the effect and the noise and the confusion and some of the damage done to human beings, it might as well have been combat?

Megan Rose: Exactly, and they, you know, you recall in 2017 when these crashes happen, there was a lot of rhetoric flying back and forth between our country and North Korea. They were at a very heightened state out in the Pacific. So while it was not necessarily wartime, although we are still at war in Afghanistan, it was a time of really intense maneuvers. And the Pacific fleet is already very overworked and constantly doing missions. So they’re in that state. And then, yes, when you have something so traumatic where your men are dying, things are happening where it sinks. I mean, both of these destroyers almost sank, like courageous efforts of the crew to keep them above water and get back safely back to port — so, yeah, I think it does have an equivalent to combat in some sense, sure.

Tom Temin: Megan Rose is a reporter at ProPublica, thanks so much for joining me.

Megan Rose: Thanks for having me.

Tom Temin: We’ll post this interview along with a link to her article at www.federalnewsnetwork.com/FederalDrive. Hear the Federal Drive on demand. Subscribe at Apple Podcasts or Podcastone. 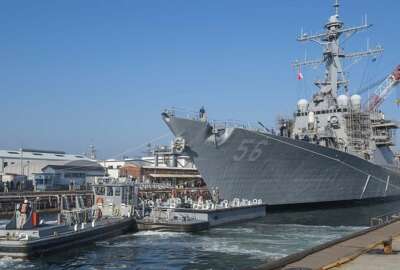 USS John S. McCain back at sea after 2017 collision 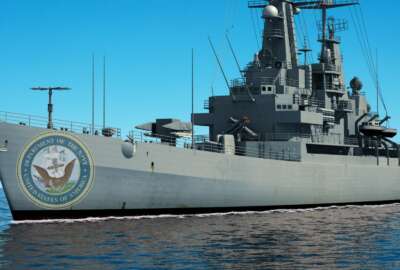