Do federal employees get paid more than their private-sector counterparts? It all depends on who you ask, and what numbers they’re using.

A large majority of federal employees who took a Federal News Radio’s survey said a recent Cato study comparing their pay against the private sector doesn’t give enough context to an issue that has been relitigated numerous times by a handful of think tanks.

Do federal employees get paid more than their private-sector counterparts? It all depends on who you ask, and what numbers they’re using.

A large majority of federal employees who took a Federal News Radio’s survey said a recent Cato study comparing their pay against the private sector doesn’t give enough context to an issue that has been relitigated numerous times by a handful of think tanks.

Of 720 respondents that took our survey, nearly 90 percent said the Cato study didn’t fairly represent the issue of how well government workers are paid.

“These reports are so different every time they are published, it’s hard to believe any of them,” one respondent said in response to the survey. “The logic seems to be flawed on both sides, and no one seems to care about the actual truth, just whatever information supports their own agenda.”

The Cato study used Bureau of Economic Analysis data to compare the average wages and benefits of 2.1 million federal civilian employees against the 114 million private-sector workers in the U.S. Most survey respondents (64 percent) agreed that reports like Cato’s should compare both salary and benefits in order to get the bigger picture, but said the study didn’t make an apples-to-apples comparison of similar positions.

“If you don’t compare similar positions, this is meaningless,” another survey respondent said. “There aren’t very many unskilled labor jobs in the federal government.”

In order to obtain a true understanding of pay and compensation, 71 percent of those who took the survey said future reports should compare professionals in the public sector versus professional in the private sector.

Yet another said these wage-gap studies don’t reflect where federal salaries compare by region.

“If you live in the D.C. area, we are underpaid compared to private industry. Compare by geographic locations and job types,” the survey-taker said.

Another point of mistrust for federal employees is the source of these wage-gap reports. Only 8 percent of respondents said they would trust such a study from a think tank organization like the Cato Institute, compared to 34 percent from a federal watchdog like the Government Accountability Office or the Congressional Budget Office, which 26 percent said they’d trust. Only two respondents — less than 1 percent overall — said they’d trust these findings from the news media.

In the comments section of our survey, one Defense Department employee said none of these studies take into account many of the unique factors — postive or negative — of working for the federal government:

“Surveys don’t always take into account the things that can’t be measured. As a federal employee, I’ve chosen to serve my country. That means for me, working in a building that is over 100 years old, with no restroom on the floor where I work for me to use … waiting in line to enter and being screened and checked at random, not being allowed to have my personal cell phone because it has a camera at my desk, 30-minute lunch break, no parking in the vicinity of my office building, etc. etc. etc. etc. But, I’m serving my country, doing what I can as my part to keep us safe (work for DoD) and yes, getting paid for it. I wouldn’t work anywhere else at this time! So to truly just compare us to the private sector,  then a bigger, better look needs to be done.” 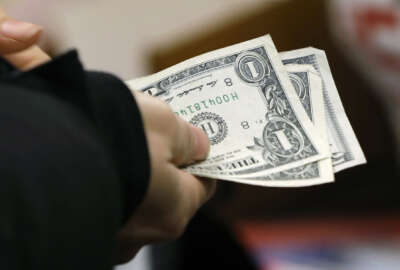