U.S. Customs and Border Protection plans to spend $46 million to update something you might not even know it does. Namely, the inspection of cargo coming into the United States, not by sea or air, but by rail. With a look into this program, CBP’s Aaron Bowker joined Federal Drive with Tom Temin.

U.S. Customs and Border Protection plans to spend $46 million to update something you might not even know it does. Namely, the inspection of cargo coming into the United States, not by sea or air, but by rail. With a look into this program, CBP’s Aaron Bowker joined Federal Drive with Tom Temin.

Tom Temin: Mr. Bowker, good to have you on.

Aaron Bowker: Good to be here.

Tom Temin: And you are now acting as the Information Officer for the division of CPB that does this, but you’ve got quite a number of years on the street as an agent, so to speak – correct?

Aaron Bowker: Yeah, that’s correct. I’ve been an officer for 18 years and still wear the uniform, still operational, still in the field up in Buffalo, New York, where we do have rail locations that you speak of where we do scan these trains as they come in.

Tom Temin: I guess we sometimes forget the trains go in and out of the country, as well as around inside them, moving all kinds of things. Give us the overview of CBP’s program for trying to verify what’s on a train and that it’s all legal and should be coming in.

Aaron Bowker: Sure. So just like cargo coming in the truck, the same process takes place for cargo moving in via rail. You’re talking about each day officers inspect about 25,000 pieces of cargo containers coming in to the United States in 20 ports of entry. And that includes those rail yards or those rail scanning locations. So cargo is still sent to us in advance, we still do know when those trains are coming in, we are able to target cars that we may have to take a look at. But what these scanners allow us to do is scan approximately 60% of the commercial route coming into the country at various locations throughout the country.

Aaron Bowker: Yes, we do. They are required to send us the information in advance of what’s coming in. So that we do have an idea of what it is we are looking at when we are scanning it. The nice thing is, is this non intrusive technology really gives us an efficient look, we can scan large volumes of commercial traffic for contraband or people who may have hopped on the trains to try and come into the United States in between our ports of entry sort of an illegal way. And the officers, they’re really skilled. And they’re trained at this and they look at thousands of these types of cargo containers every single day. So they’re used to looking at what will appear as an anomaly in those. So for example, you set breakbulk, they know what it’s supposed to look like. So if they’ve seen 1000s of shipments of grain, then when something is amiss within those scans, they know exactly what they’re looking at, they can spot those anomalies pretty frequently.

Tom Temin: The technology then can see into what’s going on there with x-rays?

Aaron Bowker: Yeah, exactly. That’s probably the simplest term to put it in. It uses x rays through like the generation of radioactive isotopes. So the way the system works is it can penetrate it. And that sends the image back to the officer. Now it’s not like you can read a label on a bottle, let’s say, but it gives them an idea of what’s in the container. So for example, if they say hey we have a 53 foot container full of plastic bottles, they know what the plastic bottles should look like, especially stacked up. But then they can also determine what anomalies will look like as well.

Tom Temin: Or if there’s a pile of grain, that’s usually a rounded load. If there’s like a big depression in the middle of it, that might give you a clue to something.

Aaron Bowker: Exactly. If the container is supposed to contain plastic bottles, and it looks like there’s bags of something, then yes, that would obviously stand out. That’s something that they would take a look at.

Tom Temin: And by the way, this is a really off the wall question – but do smugglers ever also indulge in graffiti tagging? And is there any way of looking at trends? Or do you look at trends in the cars, rail cars are covered with graffiti? Does that ever tell you anything about what might be going wrong there?

Aaron Bowker: I would say and I’m not going to give away all our secrets, right. But I would say that the officers not only looking at what’s inside the container, but what’s also on the outside, whether it’s tampering with doors, markings, things like that – sure, drug smuggling organizations, criminal organizations, they’re always looking at new ways to be able to get their profits into the country. So in this case, we’re going to we’re talking about narcotics. Yeah, they’re gonna find new ways to try and smuggle it in so they can spot what they’re looking for as well.

Tom Temin: Sure, we’re speaking with Aaron Bowker, he’s director of communications for the field operations office at Customs and Border Protection. And now you are modernizing the scanning facilities at a number of rail crossings, rail entries into the United States. What’s going on that you’re modernizing here?

Aaron Bowker: Well technology always advances, we know that with our phones or computers. The same is true for non intrusive technology, we get more efficient, we get better scans and in the commercial environment, especially when you’re talking about coming out post pandemic, our economy starting to reopen, businesses are starting to open – people want more goods now. We have to be as efficient as we possibly If we can, so even though things have been sort of shuttered for a long time for the last year, we haven’t stopped continuing to advance our technologies. And in this case, we are talking about installing new scanners at 12 locations throughout the country, beginning in the fall of this year. And it’s going to allow us to be more efficient when it comes to processing those commercial rail trains.

Tom Temin: And where will this be taking place? Where will you be installing these new scanners? I guess a variety of places.

Aaron Bowker: A variety of places Washington state Texas, a couple locations in New York, California, Minnesota, Arizona, North Dakota – so throughout the country, our 12 busiest locations which handle about 60% of our overall rail traffic.

Tom Temin: And this will speed the inspections of trains coming through?

Aaron Bowker: It makes them more efficient. Yeah, so the trains can actually come in at a little bit of a higher speed. But it also by efficiency, what that means is when the scans are actually clear, the officers can actually make a better determination on what’s an anomaly, which means they’re not asking for certain cars to constantly be pulled off, where they may not have been able to discern the anomaly before, it’ll be a clear picture for them now, which means if they don’t have to look in certain cards, it’s more containers after they get scan that can just continue to move on to their destinations.

Tom Temin: Sure. So for automobiles crossing road crossings, every three seconds translates to hours saved at the end of the line and this kind of thing. And CBP just like that. Yeah, say they keep those statistics. I imagine. The train operators must love this. Because the delays would be reduced dramatically from the way you describe it.

Aaron Bowker: Yeah, that is correct. So if the train can get to its rail yard faster, and those containers can then move on to their next destination, either via train or get put onto a back of a truck or whatever it may be to get to its final destination, if there’s less of those containers that we have to open. Because we’ve gotten better scans, and we can actually see what’s in there. We’re confident that there are no anomalies, then ultimately, yes, from an operational standpoint, it’s better for the companies moving the goods. Yes.

Tom Temin: And these scanners just give us a sense of how big they are. Is it something like you can hold in your hand and aim at the car or is it a big machine like a telephone booth?

Aaron Bowker: It’s something that train drives right through. So it almost looks like a big gantry system that would go from the bottom of the train, kind of right over it to the top of it so that we can see right through both the top of a rail car and the bottom rail car. They’re pretty tall, they look like a gantry system. It’s definitely not something you could handle, you wouldn’t be able to see through the entire train if it was a handheld device. So these are larger systems.

Tom Temin: And can it handle the so called piggyback loads or the by modal modes where there’s truck trailers on top of a flatbed?

Aaron Bowker: Yes, they can.

Tom Temin: And is there any crossover in technology for ship container inspections, because they have barcodes on those but they also look inside, and train technology scanning?

Aaron Bowker: They’re very similar, some shipyards, we have gantry systems, but we also use what’s called a mobile scanning system for non intrusive technology. Sometimes we used to call them back as trucks on their mobile x-ray systems. So it has like a big boom that hangs the source on the other side. So we can scan a truck and then the truck drives through that once the container is then loaded on it. But again, we’re still seeing from the bottom of the truck up to the top of the container.

Tom Temin: And by the way, what’s the worst thing you ever saw in a train car?

Aaron Bowker: Oh, boy. We’ve seen a lot. We’ve seen weapons. We’ve seen people smuggled. We’ve seen a lot of drugs smuggled that way. To give you a couple examples, recently in Laredo, Texas, the non intrusive technology identified $1.2 million in cocaine and fentanyl in separate incidents, Buffalo, New York, the same type of technology interdicted about $6 million worth of marijuana. Del Rio, Texas in May, we had automatic weapons seized eight of them in total. So these types of things. This is what we see on a regular recurring basis, right. You’ll see people smuggled in, they’ll hop onto the train cars and try to hide in natural voids. But with with this non-intrusive technology really enables us to spot it.

Tom Temin: Well, what a way to try to get in, no dining car on a freight train. Aaron Bowker is an agent and director of communications for the field operations office at Customs and Border Protection. Thanks so much for joining me. 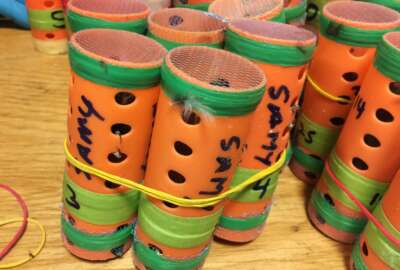 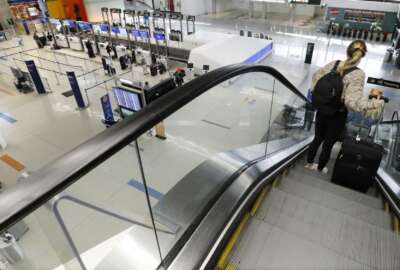 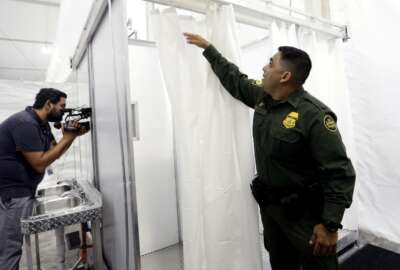