Back in March, Washington attorney Heidi Burakiewicz filed a class action suit to get hazardous duty pay for federal employees exposed to a virulent biologic. COVID-19, that is. Now the case has gained more plaintiffs. For an update, Ms. Burakiewicz joined the Federal Drive with Tom Temin.

Interview transcript:
Heidi Burakiewicz: Thank you for having me.

Back in March, Washington attorney Heidi Burakiewicz filed a class action suit to get hazardous duty pay for federal employees exposed to a virulent biologic. COVID-19, that is. Now the case has gained more plaintiffs. For an update, Ms. Burakiewicz joined the Federal Drive with Tom Temin.

Tom Temin: Now, it seems like so long ago, but it was only March that this pandemic struck. So review for us the lawsuit that you had filed at that time, on whose behalf and where did it file and what was it seeking?

Heidi Burakiewicz: We filed a class action complaint in the Court of Federal Claims here in Washington, D.C., seeking hazardous duty pay for federal employees. At the time when we filed a complaint back in March, it was early on during the days of the pandemic and we had just five plaintiffs from three different locations: an employee who worked for the Department of Veterans Affairs at a hospital in Portland, a USDA employee, a food and safety health inspector who was going into meatpacking plants, and then three employees who work for the Bureau of Prisons in Oakdale, Louisiana, which at the time, was the first prison that was really hit hard by the pandemic.

Tom Temin: That case, then, what is the status of it? How long does it take for these things to even get a court date?

Heidi Burakiewicz: Well, the case is still making its way through the normal process in court. I think the most unfortunate thing is when we filed this case, I really hope there’s already a statute on the books that entitles these employees to hazardous duty pay. And we hoped that the government would do the right thing and pay these employees who are risking their lives, to go out and keep the country running, keep the rest of us safe and alive, or that Congress would pass legislation if the executive branch wasn’t going to do it to make sure these employees get the pay to which they deserve. Quite frankly, hazardous duty pay isn’t even enough for what the federal workforce is going through. They’re getting sick, and thousands and thousands of federal workers have gotten sick. Hundreds have died.

Tom Temin: Yes. And the hazardous duty provision gives them, what, under the statute?

Heidi Burakiewicz: They’re entitled to hazardous duty pay. So if you’re a GS employee, for example, and you are exposed to a virulent biological, which we contend COVID-19 is–and I think even the government concedes that it is–you’re entitled to 25% of your base pay. And then of course, that increases the rate at which you’re paid for overtime. And these federal employees in the really hard-hit locations are just working exhaustive amounts of overtime. Employees in the Bureau of Prisons, if they haven’t caught it and gotten sick themselves, they’re working 16 hours a day, day after day after day.

Tom Temin: And now there has been some developments from your end of the case. You’ve added plaintiffs, correct?

Heidi Burakiewicz: We’ve added additional plaintiffs. So now we have 22 representative plaintiffs from different agencies and components and locations around the government. And it’s heartbreaking that we had to do this, quite frankly, because this just shows how widespread the problem is. It’s getting worse and it’s spreading. It’s not getting better. And people who were not affected in March are now being hit quite hard with it. And it’s, quite frankly, it’s outrageous. The problems that I heard in March, I’m continuing to hear again today. You know, I mentioned one of the original plaintiffs was from a federal prison in Oakdale, Louisiana. And the things that I heard in March in Oakdale, and what I heard the government saying was, “This is the first place this has happened. We’re learning. We don’t know what to do.” Well, they’re making the same mistakes today. There’s a prison, for example–there are several–but just as one example, there’s a prison in Miami, Florida, that’s hit hard. It had no COVID cases whatsoever. And in a matter of days, it skyrocketed the number of inmates and staff in the prison who’ve had it. And I hear the same mistakes being made that I did back in March. We’ve learned nothing. The government has not improved its response among the federal workforce.

Tom Temin: We’re speaking with Heidi Burakiewicz. She’s with the law firm, Kalijarvi Chuzi Newman & Fitch. And if you have 20 plaintiffs in a class action suit, what does that mean, and should they win the back pay with the 25% differential? What about everyone else in the same agency?

Heidi Burakiewicz: Well, eventually we’re going to have to have a sign-up process, and we’re working on getting that running. Again, when we filed the case in March, we really hope the government would just do the right thing and pay these employees the money into it. They’re absolutely entitled. Nothing would have made me happier than have to withdraw this complaint because the employees were getting the pay to which they deserve for going to work and risking their lives. Unfortunately, that hasn’t happened. So we’ll go forward with a case and do everything we can to protect these workers and get them that pay to which they’re entitled–anything else that we can do to help them. My heart breaks, quite frankly, every time I hear a story about what these employees are going through. So eventually we’ll have a sign-up process. We anticipate the case could have as many as 100,000 employees, unfortunately–people that are going to work and being exposed to COVID-19.

Tom Temin: Because when you have sued the government on behalf of federal employees for back pay from federal shutdowns, you did have signups and I think some of those ballooned to 20, 30, 40,000 plaintiffs. So do you anticipate something happening like this again, here, with the pandemic?

Heidi Burakiewicz: Yes, absolutely. Unfortunately, I think that this could be even more widespread, because the litigation that we pursued on behalf of federal workers during the shutdown, that was limited to just employees who were required to go to work, and were not paid on time. So those essential workers, again, the Bureau of Prisons, ICE, TSA workers, people that had to–even though the shutdown was going on–they still had to go to work and did not get paid for it on time. Unfortunately, this is much more widespread than that. In a shutdown, not all agencies are affected, depending on their funding. There’s a large number of employees who were just furloughed, and were not required to go to work, even without pay. This is much more widespread, and it’s horrible. I mean, as I said before, people are literally getting sick and dying.

Tom Temin: It strikes me that potentially anyone who enters a federal office, regardless of the function or mission of that office, could be a potential plaintiff because the virulent biologic is pretty much everywhere on Earth at this point, not just in a laboratory somewhere.

Heidi Burakiewicz: Absolutely, and that’s a message that we want to get across to the people that are making these decisions. When I hear stories about federal workplaces, talking about returning employees, or when I hear about people not allowing employees who could absolutely telework not allowing them to do so, it just angers me tremendously, because there are common-sense steps that the government could be taking to keep these people safe at home, and then focusing on the people, the employees who don’t have the option of teleworking, like the people in the Bureau of Prisons or on military bases. TSA workers, Border Patrol. Let’s focus on those and keep other people home safe, if they’re able to telework.

Tom Temin: Heidi Burakiewicz is a lawyer with Kalijarvi Chuzi Newman & Fitch. Thanks so much for joining me. 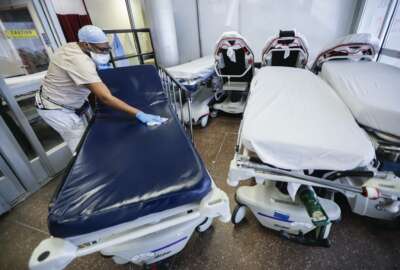 With a potential return of Congress, federal hazard pay will be up for debate