Members of the Foreign Service carry out the State Department’s diplomatic mission in foreign outposts across the world. But it’s not just diplomats who do this work.

In many cases, their spouses, children and other family members help support the mission at overseas posts. In recognition of this work, the State Department last month recognized Foreign Service families for...

Members of the Foreign Service carry out the State Department’s diplomatic mission in foreign outposts across the world. But it’s not just diplomats who do this work.

In many cases, their spouses, children and other family members help support the mission at overseas posts. In recognition of this work, the State Department last month recognized Foreign Service families for their volunteer efforts aboard.

At a ceremony at the State Department, agency officials awarded the Secretary of State Award for Outstanding Volunteerism Abroad. The awards recognize agency employees and their family members for acts that included mentoring student entrepreneurs in Morocco and helping young women learn IT skills in Tanzania.

Susan Pompeo, the honorary president of the Associates of the American Foreign Service Worldwide, and wife of Secretary of State Mike Pompeo, said the award recipients help put a face of the U.S. diplomatic mission.

“This volunteerism is quintessentially American – very American – which I’m very proud of … It’s the best way to convey who we are,” Pompeo said in a keynote address.

As a testament to their accomplishments, Pompeo said the award recipients identified problems and solutions in countries less familiar to them.

“It’s one thing if you’re in America and you’re doing good work. You kind of know how systems work, for good or for bad. But you may not know cultural morays and those sorts of things, all of which will impact the work you’re trying to do,” she said. “And so there’s definitely risk to stepping out of the embassy and doing these kinds of things. But it’s well worth the risk, I think we see that today.”

Marcus Lamb, an information programs officer posted in Dar es Salaam, Tanzania, received an award for his work with a local organization to teach IT skills to local girls who aren’t able to continue their traditional schoolwork.

Lamb volunteered nights and weekends for over a year, and taught two classes on IT fundamentals,  coding and networking.

But then he developed his own comprehensive curriculum, which includes workshops on resume-building and interviewing skills. Lamb also set up an e-mentoring program where he sought out advice from women IT professionals who work in the State Department and in the private sector.

By setting this example, Lamb convinced other embassy staff to volunteer as well. So far, 35 young women have graduated from his program.

In accepting his award, Lamb said he couldn’t make it to his student’s graduation, but he shared the message he sent to them.

“I said, ‘Please accept my congratulations on your achievement and I hope you still have that spark that I saw when we first met. As I said to you all on my last day with you, I still hold Tanzania and all of you in my heart,’” Lamb said. “’I hope that I have met the next Ginni Rometty, who was the first [woman] CEO of IBM, or the next Bill Gates.'”

Most of the awards went to eligible family members (EFMs) — the spouses, domestic partners, unmarried children under the age of 21 and dependent parents or siblings who are listed on Foreign Service officers’ travel orders.

The Foreign Service consists of more than 13,700 officials working at nearly 300 posts across the world. But they bring with them more than 2,000 EFMs.

“This is actually where soft diplomacy stands. The diplomats themselves are working inside the embassy, but the spouses are networking outside in the local community,” AAFSW President Joanna Athanasopoulos Owen said in an interview.

Jennifer Yan, for example, an eligible family member stationed in Phnom Penh, Cambodia, held food drives for the past three years and donated meals to local charities and nonprofit organizations, including an orphanage for children with HIV and AIDS.

In accepting her award, Yan said her volunteer work sets an example for her four children and her community.

“Not only did I want to get involved, but I also wanted to help the embassy community and the impoverished community in Cambodia. It is something I love to do, knowing that you have done something good for another person,” Yan said.

Claudia Felice-Kuebler,  an EFM stationed in Quito, Ecuador, led grant-writing efforts that have provided relief to hundreds of migrants in need. She also led a women’s mentoring program that provided microloans to families.

“I come before you today as a witness to what can happen when we step into the uncomfortable,” she said. Volunteering is uncomfortable, because there is no ideal moment. Often we lack time and resources. Volunteering is hard, because at the moment you’re helping, you have heart, and you’re bringing yourself to help those who have lost heart.”

Zhou “Cecilia” Zhuang-Haas, an EFM whose spouse is a Foreign Agricultural officer in Rabat, Morocco, worked through a global non-profit to mentor students on entrepreneurial skills, and helped connect them with Moroccan government officials to make change happen.

One team she mentored received a grant to help 180 families in rural Morocco gain access to renewable electricity. In an interview, she said part of the challenge of volunteering is just stepping outside of the familiar.

“I think for a spouse serving at a post with a very high language barrier, it’s definitely very tough to step out of your comfort zone,” Zhuang-Haas said. “We might stay with our embassy family or expat community.”

Carlos Perez, an EFM whose wife is stationed in Frankfurt, Germany, received an award for improving morale at the post and organizing projects that improved the lives and careers of Foreign Service family members.

Perez, for example, worked with T-Mobile to help set up cell phones for staff during turnover periods.

He also helped turn an unused building on the consulate grounds into a hub for EFMs to provide services like a nail salon, a massage parlor and a barbershop. This initiative helped EFMs with prior careers, like restaurant chefs and professional hairstylists, regain employment.

In an interview, Perez said he based his work on his experience in the Army and its morale, welfare and recreation programs for soldiers and their families. 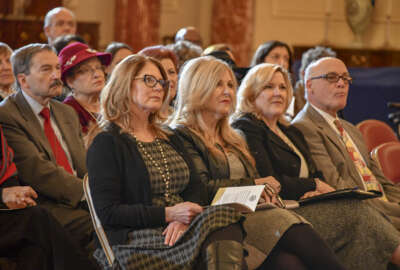 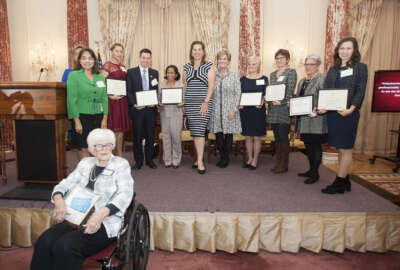 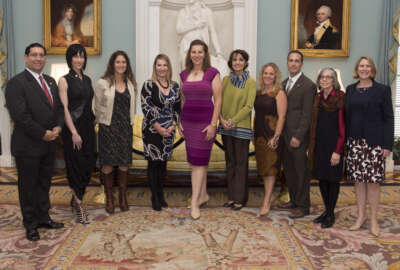