The Securities and Exchange Commission becomes the first federal agency in the Washington, D.C., area to send their workers home due to fears of the coronavirus.

A SEC spokesman confirmed the decision made by leadership Monday afternoon to ask all employees in the Washington, D.C., headquarters to telework.

“Late this [Monday] afternoon, the SEC was informed that a Washington, DC headquarters employee was treated for respiratory symptoms today,” the spokesman said in an email. “The...

The Securities and Exchange Commission becomes the first federal agency in the Washington, D.C., area to send their workers home due to fears of the coronavirus.

A SEC spokesman confirmed the decision made by leadership Monday afternoon to ask all employees in the Washington, D.C., headquarters to telework.

The SEC has about 4,200 employees across its headquarters and 12 regional offices. The Washington Post first reported the SEC’s decision to ask D.C. area employees to telework.

The Office of Personnel Management issued several pieces of guidance over the last week encouraging agencies to use telework as a tool to ensure the continuity of operations.

The SEC has focused on ensuring its employees were prepared to telework over the past few years.

In 2017, it began a “telework effectiveness” project, according to the 2018 telework report to Congress. It offered 17 additional telework training courses for employees and celebrated “telework week” that year by distributing additional information to employees about how they could utilize the program and best track their use on SEC’s time and attendance systems. About 91% of SEC employees used the agency’s time and attendance system to indicate telework participation in 2017, compared to 64% in 2016.

“Even with increased telework, the SEC remains able and committed to fully executing its mission on behalf of investors, including monitoring market function and working closely with other regulators and market participants,” the spokesman said.

OPM emphasized agencies should act with extreme caution if there is a confirmed or even suspected case of COVID-19. The illness is caused by the current strain of the coronavirus. The World Health Organization defines coronaviruses as “a large family of viruses that cause illness ranging from the common cold to more severe diseases such as Middle East Respiratory Syndrome (MERS) and Severe Acute Respiratory Syndrome (SARS). A novel coronavirus is a new strain that has not been previously identified in humans.”

OPM stated telework participants who aren’t sick are expected to work from home.

“Agencies should have written telework agreements in place with as many employees who are willing to participate and communicate expectations for telework in emergency situations,” OPM said. “It is important for an agency to have a solid technology infrastructure established to support a high level and volume of connectivity, so employees can work seamlessly from their alternate locations (e.g., home) and maintain established records and security requirements. Managers, employees and organizations must remain flexible and adapt to the changing environment.”

At the same time, OPM said agencies can use ad-hoc telework agreements in situations where an employee is not eligible to telework.

Other agencies have prepared for the situation the SEC is facing. NASA and the Air Force held telework test days on Friday, while the Bureau of Fiscal Service in the Treasury Department conducted a tabletop exercise to see how it could continue to operate in the wake of a breakout of the coronavirus.

The Defense Department also loosened its telework policy for civilian workers on Monday, telling leaders to maximize the number of employees who are authorized to telework. And they’re being “strongly encouraged” to sign “ad-hoc” telework agreements that cover all telework-eligible employees who don’t already have a signed agreement. 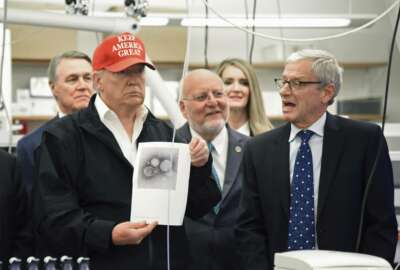