Before COVID-19, the State Department spent years unraveling another medical mystery. Since 2016, dozens of diplomats overseas have reported sudden bouts of dizziness, cognitive problems and hearing loss with no underlying conditions.

Personnel first exhibited these anomalous symptoms while posted in Havana, Cuba, and the condition became known as “Havana syndrome.” But Ambassador Pamela Spratlen, a senior adviser to the task force investigating the issue, said the term doesn’t do justice to what department personnel...

Before COVID-19, the State Department spent years unraveling another medical mystery. Since 2016, dozens of diplomats overseas have reported sudden bouts of dizziness, cognitive problems and hearing loss with no underlying conditions.

Personnel first exhibited these anomalous symptoms while posted in Havana, Cuba, and the condition became known as “Havana syndrome.” But Ambassador Pamela Spratlen, a senior adviser to the task force investigating the issue, said the term doesn’t do justice to what department personnel have gone through.

“That kind of dresses it up and makes it seem like there’s a very specific and standard list that you could go to, as if you were talking about something that you might look up on WebMD. But in fact, there is no specific definition, even though diplomats and some of their family members have experienced a range of symptoms that the medical professional has been able to look at and identify,” Spratlen said in an interview.

The State Department reduced staffing in Cuba as a precaution, but half a world way, the U.S. Consulate personnel in Guangzhou, China reported feeling many of the same symptoms. The department stood up a Health Incident Response Task Force in 2018 to lead an interagency investigation, but many questions remain unanswered.

Spratlen retired from the Foreign Service in 2019 after a nearly 30-year career, but came back to the department in March to serve on its Health Incident Response Task Force, which reports to senior leadership with updates on this ongoing investigation.

In her first interview since accepting the position, Spratlen told Federal News Network she’s determined to shed light on this persistent issue.

“The question always is, what caused this? How is it that five years after initial reports of these kinds of incidents at our embassy in Havana, Cuba, could we still not know exactly what happened? That’s the big question that we all want to know,” Spratlen said.

It’s a burning question for agency leadership as well. Secretary of State Antony Blinken told the House Foreign Affairs Committee last month he’s “deeply committed” to getting to the bottom of these incidents.

Asked whether the department has identified a perpetrator behind these incidents, Blinken told members in the unclassified hearing that a clear culprit has not yet come into focus.

“There’s not much I can say in this setting, but I think the short answer to your question is no,” Blinken said at a March 10 hearing.

CIA Director William Burns told the House Intelligence Committee this week he appointed a senior agency officer to oversee the care of affected employees and the investigation of what led to their illness.

Burns told committee members he has visited staff at Walter Reed Army Medical Center and the National Institutes of Health to thank them for their help treating affected personnel, and met with affected CIA employees.

“I’ve met with three different groups … of my colleagues going back to Havana who have been affected by these incidents, simply to make clear to them not only my personal priority, but that we take very seriously what they have experienced and that I have enormous respect for their sacrifice and their dedication and that we will get to the bottom of this,” Burns said Thursday.

Diplomats in some cases describe hearing a noise or feeling pressure before experiencing symptoms. The vast majority of personnel have recovered, but others complain of long-term side effects.

Aside from the locations, few other patterns emerge from these incidents. They’ve happened day and night to employees on temporary duty staying in hotels and to full-time personnel on consulate grounds. The condition also affects personnel from a variety of other agencies the State Department supports overseas.

The department has some partial answers, or at the very least, some theories.

The National Academy of Sciences, in a report contracted by the department, concluded that “pulse radio frequency” — in other words, high-frequency microwaves — led to these health problems. Spratlen said that’s the leading theory so far, but the investigation continues.

“The basic fact is that we’re still perplexed about what exactly happened. So the pulse radio frequency seems to be the leading kind of idea about what might have caused this. But it’s not the only idea out there,” Spratlen said.

Officials at one point in the investigation floated the idea that insecticides used in Cuba to prevent the spread of Zika led to these symptoms.

Spratlen said the task force is focused on making sure that, in the event of another incident, the department knows which employees have symptoms as soon as possible and expedite treatment. That goal, she added, extends to the interagency personnel that the State Department supports.

After standing up an accountability review board in 2018, former Secretary of State Mike Pompeo created a task force led by the deputy secretary, and later the undersecretary for management.

The Biden administration, Spratlen said, has made it a priority to “reinvigorate” the task force. She said her job is to serve as the “connective tissue” for the other bureaus and agencies involved in this investigation.

“We’re just trying to figure out what is the best way to manage this issue. I won’t say that the Cuba and China issues have faded into the past — they have not — but we want to be prepared to deal with this issue as it evolves. The priority is always going to be protecting people, mitigating the damage and working with the interagency community to see if we can figure out how to get to the bottom of this and figure out exactly what happened,” Spratlen said. 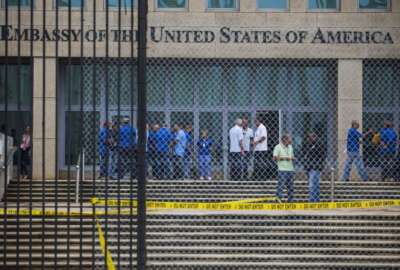